'Without justice, there is no peace': Tiananmen memories spark resistance in Hong Kong

The pastor wept, holding a candle amid tens of thousands of strangers, as he heard his friend’s name spoken for the first time in 20 years.

It was 2009, the pastor’s second year in Hong Kong and first time attending a vigil for the Tiananmen Square massacre. He had been too afraid to go in 2008 and was still worried about being seen and reported to mainland authorities.

Then the announcer read his friend’s name from a list of Tiananmen victims: “Lu Chunlin.”

All those years, the pastor — who asked that his name not be used for protection from authorities — had never uttered those syllables. He and Lu protested government corruption together in 1989 in Beijing, where Lu was shot in the back when Chinese soldiers put down a growing democracy movement.

Hong Kong authorities have banned the annual commemoration of the massacre this year, citing public health concerns because of the coronavirus. For three decades, the vigil has drawn tens of thousands of mourners honoring the memory of slain protesters, while such observances are forbidden in mainland China.

Now, as Beijing exerts control over Hong Kong to violently counter mass protests that have flared for nearly a year, many fear the Tiananmen vigil will be permanently lost, another sign of China’s tightening grip on the city’s freedoms and defiance.

Yet those who commemorate June 4 are determined to remember — and resist. But keeping a name alive can be dangerous.

After his death, Lu’s name was erased from school records, his family silenced, and anyone who spoke about him or the others who’d been killed was punished by authorities.

“It’s like this person never even existed on this Earth,” the pastor said. He hadn’t spoken Lu’s name either. He felt powerless, and hated himself for it.

But here, in Hong Kong, Lu was known. They spoke his name out loud.

“I said to my classmate in my heart: See how many people remember you?” he said. “When he was remembered, I was freed.”

The pastor has come to the vigil every year since. 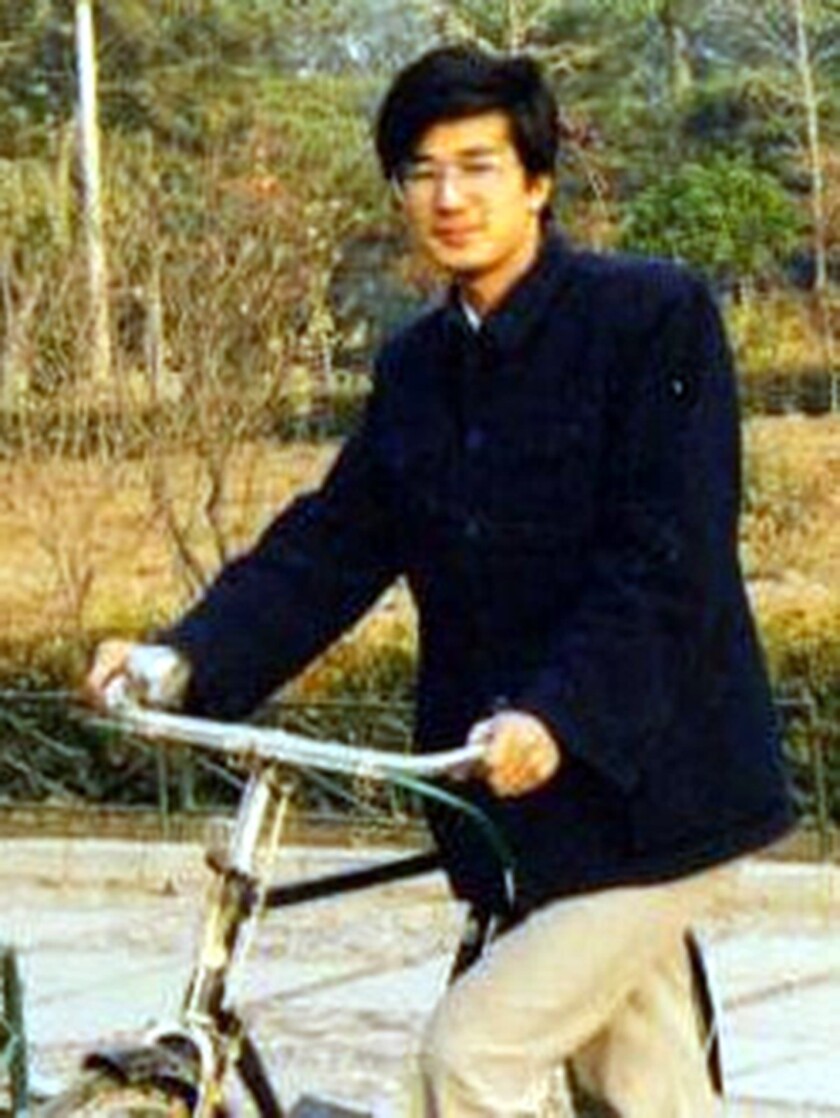 Lu Chunlin was a 27-year-old graduate student killed during the Tiananmen Square protests in 1989. His friend who survived said Lu’s name was then wiped from school records, as if he’d never existed.

Now 55, the pastor grew up as part of a generation that believed it was the hope of the nation, much like the young protesters in Hong Kong today who are resisting crackdowns on civil liberties and harsh security measures.

“Since we were young, we’d been taught that we were so lucky,” he said. “The Cultural Revolution was over. We had books to read. The adults told us: The republic’s future, modernization, it was all up to us.”

Beijing’s universities hummed with ideals. China’s economic reforms had come with inflation, inequality and official corruption; young students were determined to root it out. They formed alliances with workers and took to the streets, demanding accountability and change.

The Communist Party responded with military force, including a protester defiantly staring down a tank in an image that startled the world. An estimated 1,000 protesters were killed in Beijing, and, the pastor said, a generation of reformists lost its faith.

“We thought we were the future of this country. But to the government, we were a generation that couldn’t be trusted. So we gave up on each other,” he said. 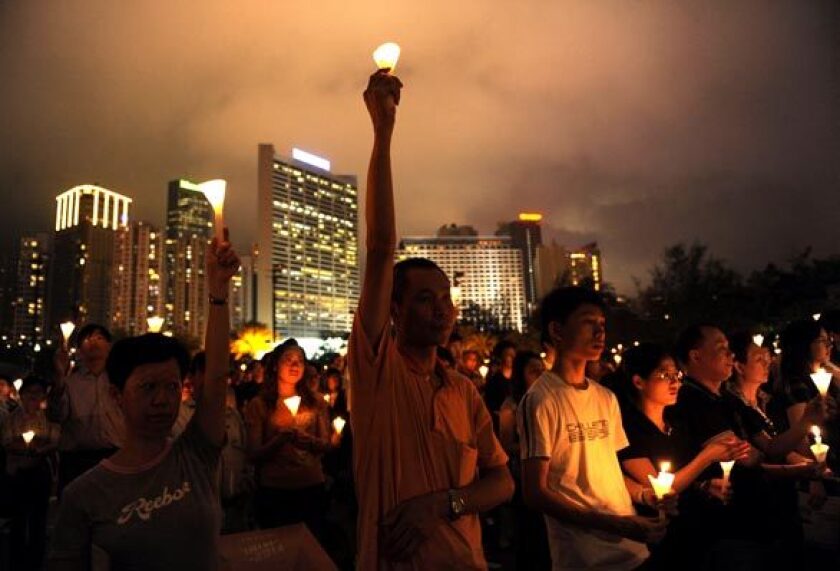 Tens of thousands of people held a candlelight vigil at Hong Kong’s Victoria Park on June 4, 2008, to mark the 19th anniversary of the Tiananmen Square massacre in Beijing.

It took him 10 years to find a new sense of direction through Christianity. He became the pastor of an underground church, moved by a theology of human dignity — people had a right to resist.

“You feel: I’m equal to Xi, we are all humans. I will not treat you as a god,” he said, referring to Chinese President Xi Jinping, who has not backed down despite international criticism in recent weeks for moving to quell Hong Kong’s pro-democracy protesters. “You see that God’s word is higher than human command. Then you are able to say ‘No’ … You are no longer a slave.”

That same emphasis on dignity motivates the Rev. Chu Yiu-Ming, 76, a pastor and longtime pro-democracy activist in Hong Kong.

In the 1970s and ’80s, Chu worked in Chai Wan, then a cramped neighborhood where new immigrants and refugees from mainland China lived in wooden shacks and struggled to get medical care for their factory work injuries. Chu’s advocacy brought him in touch with activists.

He went to Beijing several times in the 1980s as part of a Hong Kong delegation discussing the possibility of a democratic future with central authorities. British rule over the colony was scheduled to end in 1997, and they believed that governance should be given “to the people,” Chu said.

He joined a movement for direct legislative elections in Hong Kong as early as 1988. There was genuine hope, he said — and then the Tiananmen massacre happened.

“We were in deep pain. We saw the people covered with blood, the students stained with bright blood, pulled on wooden carts. Our whole family was weeping,” Chu said. “I saw this and I prayed: God, what can I do? Here in Hong Kong, what can we do?” 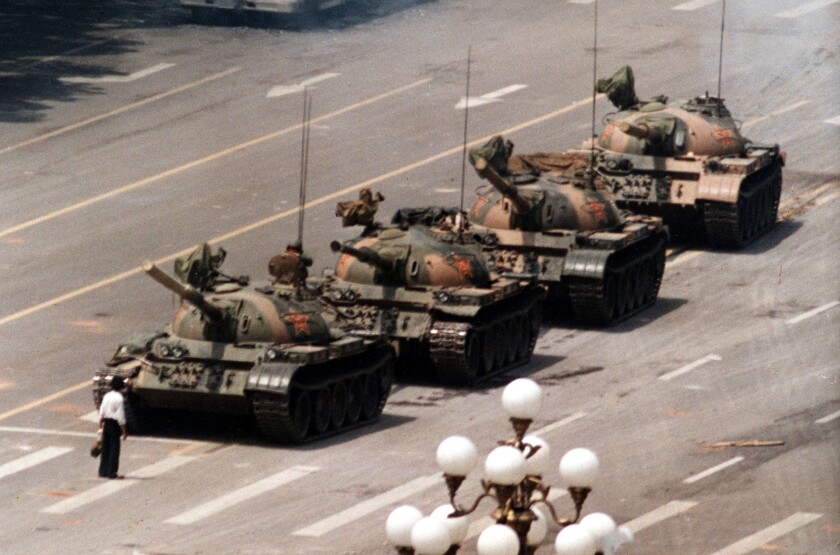 A Chinese protester blocks a line of tanks on June 5, 1989, during a massive pro-democracy uprising at Tiananmen Square in Beijing that ended with the deaths of hundreds.

The next day, June 5, 1989, an estimated 1 million people marched in mourning in Hong Kong. A few weeks later, Chu became involved with Operation Yellowbird, an underground railroad that smuggled student leaders and dissidents from the Tiananmen protests into Hong Kong.

Chu’s role was to help escapees and work with foreign consulates and overseas communities, including those in France, the United Kingdom and Los Angeles, to accept and assist them.

“I didn’t think about whether it’d be dangerous,” Chu said. “It’s saving lives. That’s a kid drowning in a pool. You must reach out and save him.”

Last year, Chu was sentenced to 16 months in prison for his involvement in the 2014 Occupy Central With Love and Peace movement, a nonviolent protest for direct elections that evolved into the pro-democracy Umbrella Movement. His sentence was suspended for two years.

Two months after his trial, mass protests gripped the city yet again, this time against a bill to allow extradition of Hong Kong residents to mainland China. The protests have since swelled into a movement against police brutality and Beijing’s deepening influence. More than 9,000 people have been arrested.

Many of the protesters in today’s Hong Kong were born after 1989. But for them, the annual Tiananmen vigil has been a place of political awakening, Chu said.

“Some people say, it’s just candles, what’s the point? But what the Communist Party fear most is what those candles represent: the truth,” he said. “To remember is to resist.”

But democratic change in Hong Kong -- it’s autonomy from the mainland ends in 2047 -- seems more distant than ever.

“I’ve experienced two generations, the June 4th generation and now, another generation of brutality toward protesters,” Chu said. “Our young people are very brave. But I am filled with sorrow, because they have sacrificed too much.”

The pastor said he has the same fears. Lately, Hong Kong churches have sought his advice on how to split into small groups and survive underground, as nonstate churches are forced to do in the mainland.

“It feels like: wherever I run, here you come again. I can’t escape,” said the pastor. Last year, he saw a picture of young protesters trapped in a subway station, being shot in the back with rubber bullets. Lu’s image had flashed in his mind.

“If those were real bullets, my classmate’s destiny would repeat,” he said. “It feels like we are returning to June 4, with that same shock and grief from the heart.”

To mark the anniversary this year, both men said they would light candles in groups — eight is the limit, according to Hong Kong’s social distancing rules. But authorities’ attempts to stop the vigils and protests by force would backfire, Chu said.

“You cannot destroy a conscience through violence. You cannot imprison a conscience away,” he said. “As long as there is unjust action and unjust reality, it’s like you’re burying explosives in the ground. Those bombs will explode one day.”

“Without justice, there is no peace,” he said.

The Doctor Sociedad: The Youngster from serious injury. We are not currently considering the option of surgery
Klopp made Liverpool Champions. Now it's your turn: the game Showsport
Daughter of the owner of Valencia: This is our club and we can do whatever we want with it. Don't the fans understand?
Manchester City and Chelsea are Interested in Dean
10 years of Suarez's great save: hand saved Uruguay at the 2010 world Cup
Sane signed a contract with Bayern until 2025 (Fabrizio Romano)
Thorgan Hazard will be number 10 for Borussia next season
Source https://www.latimes.com/world-nation/story/2020-06-03/tiananmen-remembrance-justice-peace-hong-kong

‘Phineas and Ferb The Movie: Candace Against the Universe’ Coming to Disney+ in August

It's a scary time to be unemployed. These people still chose to get laid off

US tries to seize Iranian gas heading toward Venezuela

Balloon trips to the edge of space by 2021

COVID-19 spike in Ohio due to people not wearing masks, expert says

Florida cops joking in bodycam video after firing rubber bullets at protesters were under attack: chief

Scotland's Gaelic language could die out in 10 years, says study

Horses stand idle and clowns call it quits as the coronavirus cancels Illinois rodeos. ‘This is the first time ever that we won’t have a rodeo.'

Kangana Ranaut denies being called for questioning in Sushant case yet

Students in Alabama Threw COVID Parties to See Who Would Get Infected First, Say Officials

Tom Hanks, who had coronavirus, says 'shame on you' if you don't wear a mask

The Accelerating Pace of the Recovery

Meghan Markle felt 'unprotected' by royal family during pregnancy, was advised not to speak out: court docs

Former Trump intelligence officials say they had trouble briefing him on Russia: report

Kaitlyn Dever On ‘Unbelievable’: “I Was Feeling A Lot Of Anger & My Heart Was Breaking” For Survivors Of Sexual Assault

What Ghislaine Maxwell was Doing in New Hampshire