With virus crisis abating, Europe looks to get back to open borders

Rome — Italy has reopened its borders to much of the rest of Europe nearly three months after the country became the first in the world to issue a strict nationwide lockdown as the coronavirus pandemic struck. COVID-19 has claimed more than 33,000 lives in the country, but Italy is now focusing on recovery.

"We've done it, thanks to the sacrifices everyone has made," said Regional Affairs Minister Francesco Boccia. "Now it's time to focus on protecting the economy and jobs." 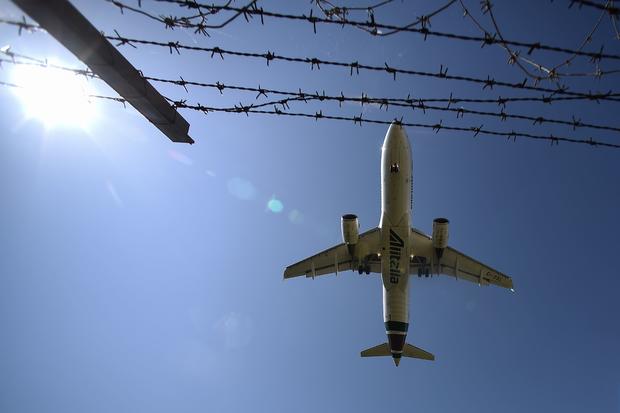 An Airbus A320 bearing the Alitalia livery lands at Rome's Fiumicino airport on June 3, 2020, as airports and borders reopen for tourists and residents free to travel across the country, within the COVID-19 infection, caused by the novel coronavirus. FILIPPO MONTEFORTE/AFP/Getty

Travel and tourism account for roughly 13% of the Italian economy. The Bank of Italy predicts GDP may shrink this year by the same percentage in the wake of the pandemic.

Italy is now allowing arrivals with no quarantine requirements from all of the 26 other countries in the European Union, plus the U.K., Iceland, Liechtenstein, Norway, Switzerland, Monaco, Andorra, San Marino and Vatican City.

For months, Italy suffered more coronavirus deaths and infections than any other country in the world, but those numbers have improved steadily for weeks. The number of deaths reported daily is now down in the double digits, compared to more than 900 in a single day at the peak of the outbreak.

Until this week Italians were limited to travel only within their home regions, but now they're free to move about the country again. There's still caution, however: The island of Sardinia is enforcing compulsory registration for everyone arriving, with a questionnaire that traces all possible internal travel.

And the nation knows COVID-19 has not been defeated. There were 55 new deaths on Tuesday, and 318 new cases, up from 178 on Monday.

"The battle is not yet won," said Health Minister Roberto Speranza. "The virus is circulating. But thanks to the things we have done in these weeks, thanks to the conduct of the Italians and the measures of the government and the regions, we have an assuredly better epidemiological picture."

It's still unclear when travelers from the United States — which has by far the deadliest known outbreak in the world — might be welcomed back to Italy.

In news that will be welcomed by tourist-dependent economies like Italy's and Spain's, Germany said Wednesday that it was also getting ready to ease its warnings against travel to and from other European countries. 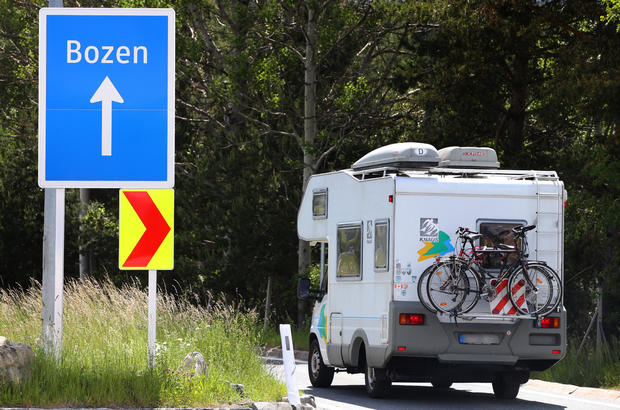 A motorhome from Germany drives toward the Italian border on June 3, 2020, near the Brenner Pass in Austria. Karl-Josef Hildenbrand/Getty

German Foreign Minister Heiko Maas issued a worldwide travel warning for German tourists in March, but as of June 15 the warnings will be lifted for 31 European countries — as long as COVID-19 infection rates don't spike again.

"I know that this decision raises great hopes and expectations," Maas said, adding a warning that just as "travel warnings are not travel bans," which Germany never instituted, government advice should not be taken as an "invitation" to head abroad.

"We will provide the best available information on each country in our travel advisories," he said, noting that from June 15, the federal government's guidelines would be updated daily for individual counties, based on infection rates, rather than the blanket advice which has applied since March.

Maas noted, for instance, that travel to Great Britain would not be recommended as long as the U.K. leaves in place its current 14-day mandatory quarantine for all foreign arrivals.

He also repeated his warning that there will be no government funded mass-repatriations of German tourists stranded abroad, as there were in the early days of the pandemic.

Cesc Fabregas: for me, Messi is the best. He always wants to win
The return matches of the 1/8 final of the Champions League and 6 matches of the Europa League will be held at the stadiums of the host teams
Rivaldo: talking about VAR, Barcelona is trying to distract attention from the real problems of the club
Ribery about the robbery: the Fans and Florence to support me. Fiorentina forever!
Vinicius tested negative for the coronavirus. He will be able to play with Alaves
The tournament-the return of MLS-is still a failure. Spend in Florida (7-11 thousand cases per day), players are afraid of the virus and complain about food
Zinedine Zidane: I'm Tired of saying that real have not won anything yet. Ahead of the next final
Source https://www.cbsnews.com/news/coronavirus-crisis-easing-europe-looks-to-return-to-open-borders-and-travel-without-quarnatine/

Harley-Davidson cuts 500 jobs in latest round of layoffs

The appeal and futility of mask meltdown videos

What to know about Clare Crawley’s rumored ‘Bachelorette’ resort

Why workplace diversity efforts are failing

Going to be 'hard for Trump to win': Billionaire Dem donor

Roger Stone is 'praying' for clemency from Trump, days before he is set to report to prison

Cases of broken heart syndrome have ticked upwards during pandemic

NFL's reported health protocols include no jersey swaps after games

'Glee' star Naya Rivera, 33, missing after boating with son: What we know

Bill Nye: Wearing A Mask Is 'Literally A Matter Of Life And Death'

Nashville out of MLS is Back after 9 players test positive

John Yoo: Supreme Court smacks Trump and delivers body blow to the office of the presidency

Ziwe Fumudoh Asks: ‘How Many Black People Do You Know?’

What Time Will ‘The Old Guard’ Be on Netflix?

Should I Have a Second Child if My First One Is Already Exhausting?

Slow cooker recipes that will feed your family for days

Easily clean pets outside with this genius water hose attachment

Trudeau says Canada handled coronavirus better than the US

What YouTube's Famebit Failure Can Teach Us About Influencer Marketing

Disney+ Sets ‘Hamilton: History Has Its Eyes On You’ Special with Robin Roberts

Barr: FBI has made 150 arrests, launched more than 500 investigations related to rioting