(CNN)As many of America's cities burn and our democracy feels like it's unraveling, attacks on Confederate monuments in response to the death of George Floyd in Minneapolis may seem incongruous to those who believe that these protests are only about what happened there. Yet the uprisings in American cities since Floyd's death, and the vandalizing and tearing-down of statues dedicated to men who fought for the perpetuation of human slavery share a common foe: white supremacy. 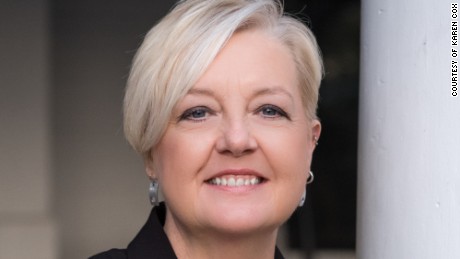 From Richmond, Virginia, where the large equestrian statue of Robert E. Lee was marked with the words "No more white supremacy" and "Blood on your hands," to Oxford, Mississippi, where the statue of the common soldier that sits at the entrance to the University of Mississippi was tagged with the words "spiritual genocide," citizens are railing against systemic racism and accurately tying it to the legacy of white supremacy that these monuments represent.
Time and again -- particularly in the aftermath of white supremacist-fueled violence in Charlottesville, Virginia, in 2017, but also after the Charleston massacre of 2015 -- Confederate symbols, both flags and monuments, have come under fire, prompting calls for the removal of monuments from shared public spaces. And yet, largely white-led GOP legislatures throughout the South have passed laws to protect these memorials and leave them firmly in place as what, for many, is a demonstration of white authority over the levers of power across the region.
A crucial thing to know here is that these attacks on Confederate monuments are not a new phenomenon. They have long been the target of individuals who have felt the inequality of American justice. When the Lee monument was unveiled in 1890, John Mitchell, editor of the local black newspaper The Richmond Planet, saw in the monument a symbol meant to deter racial progress and noted that it "(forged) heavier chains with which to be bound."

A few decades later, in the 1930s, black southerners registered their contempt for Confederate monuments in the pages of the nation's leading black newspaper, The Chicago Defender. As one reader put it, "If those monuments weren't standing, the white South wouldn't be so encouraged to practice hate and discrimination against our people."

But it was the 1966 killing of 20-year-old Sammy Younge, Jr. in Tuskegee, Alabama, that feels so strikingly similar to George Floyd's death and the current attack on Confederate monuments in 2020. In early January of that year, Younge, a student at Tuskegee Institute and active member of the Student Non-violent Coordinating Committee (SNCC), stopped by a gas station where he was told by Marvin Segrest, the 68-year-old white attendant, to use the "colored" restroom in the back. An argument between the two men ensued in which Younge asked Segrest "haven't you heard of the Civil Rights Act?" -- a reference to the 1964 legislation prohibiting the segregation of public accommodations. As the exchange escalated, Segrest got a gun and shot Younge, killing him.
Segrest admitted to the killing and was charged with second-degree murder, but in December of that same year he was acquitted. It was an outcome that Tuskegee students expected from an Alabama court, but it nevertheless cut deeply, and they returned that evening to meet on campus to decide next steps. As SNCC leader James Forman described in his book about Younge, around midnight, one student announced he was going to go to town to camp alongside the Confederate monument located in the center of the town. One after another offered to join him, until a crowd of several hundred began their walk to town. But when they got there, they recognized in the monument the symbolism of the injustice that it represented. A SNCC member called out for someone to bring paint and within minutes cans of black paint were made available. Students doused the monument with it, added Sammy Younge's name, and in large capital letters the slogan "BLACK POWER" across the pedestal. They also set brush fires around the base.
This was nearly 50 years before "Black Lives Matter" first appeared on Confederate monuments, which today still serve as symbols of oppression, and of the racism embedded in our system of justice, among members of police departments, and an ever-expanding network of hate groups. In 1966 it was the Ku Klux Klan, in 2020 it can be anyone from white nationalist gun rights activists to other extremists tied to the alt-right movement. In 1966, Alabama's racist governor George Wallace ignored the pleas of Tuskegee's black community. In 2020, rather than address the racial inequalities that led people to protest then and now, the President of the United States has largely turned a blind eye to the pain and suffering of black Americans. Both men encouraged a militaristic response to justifiable frustration over the suppression of their civil rights.

Confederate monuments are intensely local objects. They were placed there by locals and the local community will decide whether to move them. And they should move them, because they haunt the South's town squares, college campuses, and the grounds of courthouses and statehouses -- which are supposed to be democratic public spaces. As long as the monuments to the Confederacy remain in these shared spaces, there will be no peace.

When southern towns, cities and college campuses revisit the issue of Confederate monuments on the grounds of what are supposed to be democratic public spaces—and they most assuredly will—then they must reckon with the legacy of racism and white supremacy that these statues represent. The protests of what Frederick Douglass called "monuments of folly" are unlikely to cease, and history provides us with plenty of reasons why they are a source of insult and pain for black Americans, especially black Southerners. What they, and others, see in George Floyd's death in Minneapolis, reminds them of the systemic racism in their own communities -- where Confederate monuments, some placed there more than a century ago, continue to "speak" of white supremacy and injustice.

Kolasinac will move to Bayer from Arsenal for 11 million euros + bonuses (Fabrizio Romano)
Dyer called the toilet the best player of the match between Tottenham and Chelsea
Ferencvaros will play in the Champions League group for the first time since 1995. This is the longest break between the first and second appearances
Jose Mourinho: what happened to Dyer is not normal, he was dehydrated. If the League management doesn't care about the players, I don't
Jose went berserk twice during the match with Chelsea: ran over Lampard and ran to look for Dyer - he rushed to the toilet right during the game
Lampard on relegation from the League Cup: we Need to keep a positive attitude. Everything will come if Chelsea score second, leading the score
Call of nature, what can you do? Dyer explained why he ran to the dressing room during the match with Chelsea
Source https://edition.cnn.com/2020/06/01/opinions/confederate-monuments-george-floyd-protests-history-cox/index.html?utm_source=feedburner&utm_medium=feed&utm_campaign=Feed%3A+rss%2Fcnn_latest+%28RSS%3A+CNN+-+Most+Recent%29