Green Bay Packers quarterback Aaron Rodgers has a reputation as someone who always wishes to speak to the manager.

To the public he is the beer snob who turns up his nose at all 500 brewpub taps, the faultfinding co-worker whose arrival prompts everyone to politely excuse themselves from the break room with their lunches half-eaten. No pass route is ever run precisely enough for Rodgers, no game plan creative enough for his talents, and dissatisfaction radiates from him with the passive-aggressive fury of a million failed marriages.

Nevertheless, Rodgers’s 2020 season is off to an excellent start. The Packers are 3-0 after a 37-30 victory in Sunday night’s duel with Drew Brees and the New Orleans Saints. Rodgers is tied for third in the N.F.L. with nine touchdown passes, ranks sixth with 887 passing yards and third with a 121.1 efficiency rating.

His success should be unsurprising for an eight-time Pro Bowl selection and former Super Bowl champion, except that 2020 was supposed to be the year that the perpetually disgruntled 36-year-old Rodgers earned his comeuppance at the hand of a rookie heir apparent, Jordan Love.

So much for that story line.

Much of Rodgers’s dyspeptic reputation was earned in the years that followed the Packers’ Super Bowl victory in the 2010 season and his Most Valuable Player Awards in 2011 and 2014. He then fell into incremental decline. Rodgers missed portions of three seasons with shoulder and knee injuries.

His favorite receivers faded, most of their replacements were less accomplished and his former coach Mike McCarthy’s game plans shrank to the size of a children’s menu. Rodgers’s statistical excellence eroded, but his salary kept increasing — he signed a reported four-year, $134 million extension in the 2018 off-season — trapping the Packers in a cycle of diminishing returns. 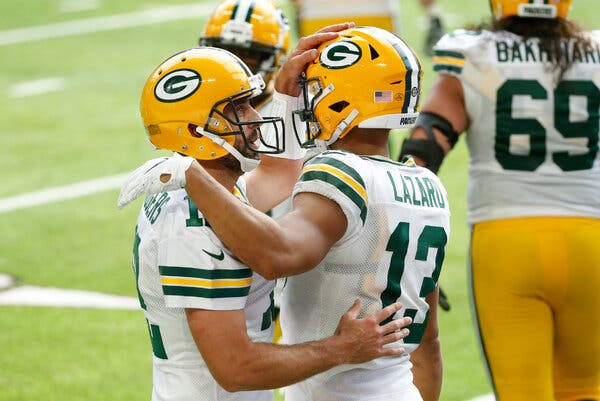 With his favorite receiver, Davante Adams, hobbled, Rodgers has been connecting with secondary targets like Allen Lazard.Credit...Bruce Kluckhohn/Associated Press

Rodgers wasn’t shy about expressing his growing disenchantment. On the field, he scrambled and gestured to receivers like a sandlot quarterback and scowled at his coaches when he did not like a play call. Off the field, he publicly grumbled about the team’s decisions and privately feuded with McCarthy.

By the time McCarthy was fired during a 6-9-1 Packers season in 2018, Rodgers had established a reputation as an aging action hero who could no longer do many of his own stunts but still demanded script and casting approval; the Packers, by extension, had fallen from perennial contenders to a straight-to-streaming “Taken” sequel.

Matt LaFleur became the Packers’ coach for the 2019 season and installed a variation on the trendy offense that propelled the Los Angeles Rams to the previous season’s Super Bowl: heavy on balanced rushing and tightly scripted passing, light on quarterback guitar solos. The Packers went 13-3 and reached the N.F.C. championship game, but Rodgers produced his second-lowest efficiency rating as a starter and appeared as enthusiastic when executing LaFleur’s intricate play designs as he would be to scrub the locker room showers.

The friction between Rodgers and the organization appeared to reach a tipping point when the Packers traded up to select Love from Utah State in the first round of April’s draft. Love, who mixed Patrick Mahomes-like collegiate highlights with stretches where he played as if his game-day breakfast was laced with peyote, posed no immediate threat to Rodgers’s starting job. But Love’s arrival sent an obvious signal that the franchise was weary of Rodgers’s declining production, huge salary and slow-boil hostility, probably in reverse order.

Rodgers signaled back in a July interview with The Ringer: He said he poured himself four fingers of tequila when he learned the Packers selected Love, offered an exhaustive list of rookie wide receivers he would have preferred and generally sounded like someone venting about a spouse’s text messages to the au pair.

In the wake of so much melodrama, this Packers season was expected to be part “All About Eve” and part “Who’s Afraid of Virginia Woolf?” with a dash of “Sunset Boulevard.” But Rodgers has proved that he is still ready for his close-up.

He is also playing nicely with others: With his favorite receiver, Davante Adams, hobbled, Rodgers has been connecting with his secondary targets instead of heaving the ball out of bounds and lamenting his lack of weapons in postgame interviews. Rodgers is even operating comfortably within LaFleur’s system, distributing short tosses while waiting for ideal opportunities to unleash his (still magnificent) deep ball.

Perhaps Rodgers has become a model employee out of sheer spite, though if Rodgers were truly motivated by spite he might have conquered the world by now. Perhaps it took a rookie’s arrival to persuade both sides — Rodgers and the coaching staff — to work things out for the sake of a Super Bowl instead of plunging the team into free agency and a rebuilding era. Or, just maybe, Rodgers’s churlish reputation is somewhat overblown, as were observations about his deteriorating skills.

Whatever the cause of Rodgers’s resurgence, it has caught N.F.L. talk-show dramatists without a narrative arc for him. He is not yet a venerable warrior like Brees or Tom Brady. He’s certainly not a young hero like Mahomes or Lamar Jackson. He never fell far enough for comeback player of the year redemption and he won too many accolades to join Russell Wilson on a quest for validation. And he refuses to play the role of arrogant heel as cast. He is just a future Hall of Famer on the inside track toward a return to the Super Bowl.

Josep Bartomeu: I had no intention of resigning. Barca will have trophies this season
Zinedine Zidane: Hazard is ready. We are happy, this is good news
Zidane on ISCO's words: it's ambition. Everyone wants to play
Bartomeu about VAR: In the match against Real Madrid, a non-existent penalty was awarded. We need fair football
Ian Wright: it's a Pity Ozil isn't playing, but Arteta's tenacity is admired
Josep Bartomeu: it was Important to start a new era for Barca with Messi. The Interests of the club are above all
Spider-man is a Barcelona fan. Tom Holland photographed in a Catalan t-shirt
Source https://www.nytimes.com/2020/09/30/sports/football/aaron-rodgers-green-bay-packers.html

Civil rights attorney Leo Terrell: Biden has done nothing for Black community 'other than insulting' them

Yahoo News/YouGov poll: With one week left, Biden's lead over Trump grows to 12 points — his biggest yet

The Squad Is Expanding, and Jemele Hill Loves to See It

Ignore early returns and other commentary

Not Every U.S. Presidential Race Has Been Decided on Election Day. Here’s What to Know About America’s History of Contested Elections

All About Moses Ingram, Jolene from ‘The Queen’s Gambit’ Cast

Biden floats rotating Supreme Court justices if he is elected

Top 3 Strategies to Sell Without 'Selling'

Tied to the tracks

Stream It Or Skip It: ‘The Undoing’ On HBO, Where A Murder Rocks Nicole Kidman And Hugh Grant’s Idyllic Marriage

VMI superintendent resigns after Black cadets speak out about racism

Silverado Fire in Southern California doubles to 4,000 acres in matter of hours, leading thousands to evacuate

Apple's Powerbeats3 Bluetooth headphones may be old, but they still rock

This is hands down the worst part of Jets-Giants agony

Why it's time to retire 'Election Day'

Jeannette Williams-Parker, Nurse in a Virus Hot Spot, Dies at 48

Why Are Democrats Backing a House Candidate With Reportedly Shady Foreign Ties?

Gianno Caldwell: Hidden Trump voters and the mystery of 2020

Pregnant Sadie Robertson reveals she was hospitalized with coronavirus

Rallies Are the Core of Trump’s Campaign, and a Font of Lies and Misinformation

200-pound tortoise is back home after escaping Alabama pen

Mike McCarthy gets vote of confidence amid growing Cowboys chaos

American jailed for attempt to overthrow Vietnam government back in California

'Time,' a kiss, and resilience as resistance: Why the Amazon documentary is a vessel for change

Questlove’s quest: To find woman who bought him a turntable

Rep. Cedric Richmond denies Ice Cube was told to hold off demands until after election: ‘That did not happen’

WHO Director-General Warns Against Politicization of COVID-19 Pandemic

Nurses Are at High Risk for Covid Among Health Workers, C.D.C. Says

‘We Don’t Have to Put Up With This’: A Candid Conversation About Bodies

Why N.Y.C.’s Economic Recovery May Lag the Rest of the Country’s

Commentary: John Brown is the hero we need right now. And 'The Good Lord Bird' delivers

Showcase all of your pictures in this sleek digital frame

Broncos: we have the right guys to straighten things out

Eye-opening tips to know about frames when buying glasses

Georgia, Once Reliably Red, Is Suddenly a Battleground. What Happened?

The pivotal post-Election Day dates you need to know

Clarence Thomas set to swear in Barrett at White House

No. 10 Florida, Mullen return to work after COVID outbreak

Pregnant Sadie Robertson Is Recovering After Hospitalization for Coronavirus