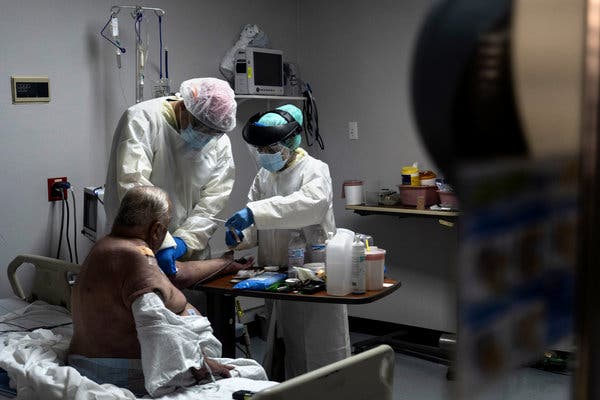 The coronavirus trends in the United States are pretty dark right now. The number of new cases is surging, unlike in most other affluent countries. And Fourth of July gatherings have the potential to make a bad situation worse.

But there is one important bright spot: The percentage of virus patients who die from it has continued to decline.

This explains an otherwise confusing contrast. Coronavirus deaths in the U.S. have been falling for most of the last 10 weeks — to about 600 a day recently, down from more than 2,000 in late April — even though the overall caseload was holding fairly steady for much of that period and has lately been spiking.

President Trump and Vice President Mike Pence have argued that the continuing decline in deaths proves that the virus is under control. That’s not correct, epidemiologists say. But the decline really is good news.

Here’s how to understand it, based on two main causes — and one big caveat:

With testing now more widespread, it’s possible that the death data will lag the case data by closer to a month. (In a typical fatal case, the death comes three to five weeks after contraction of the virus.) If that’s correct, coronavirus deaths may start rising again any day.

Even the one piece of positive virus news is looking shaky.

In other virus developments:

1. The economy has new problems

The main reason appears to be the resurgence of the virus.

Don’t be confused: This morning, the Labor Department will release a new jobs report, and most forecasters expect it to show an increase in employment last month. But the report is based on a survey done in the middle of June — before the latest virus surge. The Times’s Ben Casselman tells me: “While we won’t know the scale of the damage for a few weeks yet, we’re already seeing signs that the economic recovery is reversing course.”

The White House continued to play down the conclusion by intelligence agencies that Russia paid bounties to Taliban-backed militias to kill American soldiers. Trump called the finding a “hoax,” and his national security adviser, Robert C. O’Brien, said the C.I.A. did not brief him orally about the information because there was no “consensus” about it.

But The Times explains why that position has not persuaded many outsiders: “It would be unusual, if not unprecedented, for intelligence with grave implications to be withheld from the president on the grounds that it lacked definitive consensus.”

‘A central piece of the puzzle’: Rahmatullah Azizi, a low-level Afghan drug smuggler who became rich after establishing a presence in Russia, was a key middleman who handed out Russian money to Taliban-linked fighters for targeting U.S. troops, officials say.

Joe Biden and the Democratic Party outraised Trump and the Republicans for the second straight month in June, with a $141 million haul. Trump’s campaign raised $131 million. Both totals were nearly twice the numbers for May.

A man sat outside the so-called CHOP in Seattle on Wednesday.Credit...Ruth Fremson/The New York Times

IDEA OF THE DAY: Should schools open?

A growing number of pediatricians, childhood experts and parents are arguing that schools need to reopen this fall, even if it increases the risk of spreading the coronavirus.

“Widespread school closures come with devastating costs,” Joseph G. Allen of Harvard University wrote in The Washington Post, citing risks to learning, children’s health and parents’ ability to work. The American Academy of Pediatrics issued a similar warning this week. In a new Times piece, Deb Perelman writes: “Let me say the quiet part loud. In the Covid-19 economy, you’re allowed only a kid or a job.”

One way to offset the health risks is to delay the reopening of other industries. “If we truly want to prioritize schools opening and staying open, some other parts of our society might just have to wait,” Helen Jenkins, a Boston University epidemiologist, tweeted. Or as Jennifer Nuzzo and Joshua Sharfstein put it in a Times Op-Ed, the country should focus on opening schools, not bars.

Regardless, opening schools will not be easy or without significant risk. Sarah Cohodes of Teachers College at Columbia University has offered one set of ideas, which include prioritizing elementary schools and special education.

But there is reason for caution: While school openings in some countries seem to have gone well, they have led to outbreaks in Britain and Israel.

An oil that tingles and transforms

When I was having dinner last year at Zhangmama, a little Sichuan restaurant in Beijing, a young couple eating next to me did me a favor: Realizing I didn’t speak Chinese, they signaled to the waitress to bring me a small bowl of oil in which I could dip my sautéed vegetables. The oil was made from Sichuan peppercorns, which have a numbing, tingling spice very different from hot peppers. It transformed my vegetables.

But the oil — which also goes by the name prickly ash oil — is not easy to find in the U.S. So I’ve been thrilled to discover a small company called 50Hertz, founded by a World Bank clean-energy specialist named Yao Zhao, that sells a boldly fragrant version. The company just began selling a new batch online.

On Instagram, the cookbook author Fuchsia Dunlop has recommended using the 50Hertz oil on dan dan noodles. You can pair either the noodles or your vegetables with Gong Bao chicken, adapted from one of Dunlop’s recipes.

It’s been a summer without blockbusters, as many movies — like Disney’s live action adaptation of “Mulan” and the sequel to “Wonder Woman” — postponed their release dates because of the pandemic. But we can still reminisce about iconic movies of summers past.

For fans of the “Fast & Furious” franchise, The Times has broken down the art behind making a thrilling car chase scene. Manohla Dargis talks about the enduring relevance of “Jaws,” a movie Steven Spielberg directed when he was only 27. And A.O. Scott reflects on a summer without superhero movies — and how that may be a good thing.

Goetze turned down Beckham's Inter. Mario wants to play in Europe
Tonali will move to Inter after the end of the Europa League
Gasperini worked at Juventus (only with youth) and Inter (sacked after 5 matches), but Atalanta became the grandee for him
Parejo and Coquelin has gone from Valencia to Villarreal
Coca: The win over Liverpool had a good impact on us. It is not easy to beat the European champion and the Premier League twice
Giovane Elber: Lewandowski is better than Messi now. Lionel is a genius, but this year Robert is unattainable
The head of the Belarusian Tribune was detained in Minsk. Max, we're with you
Source https://www.nytimes.com/2020/07/02/briefing/coronavirus-jobs-numbers-joe-biden-your-thursday-briefing.html

Advisers Consider Whether Trump Can Cut Taxes Without Congress

How to Delete TikTok

‘Tough As Nails’ Renewed At CBS For Season 2

Relive the '90s With a Sleepover at the World's Last Blockbuster

‘Serious injuries’ reported after train derails amid storms in Scotland

Gunman on the loose amid active shooter situation at Louisiana hospital

Tucker Carlson responds to guest correcting pronunciation of Kamala Harris's name: 'So what?'

Activist Lizzie Velasquez blasts mom's cruel TikTok prank using her photo: 'This is not a joke'

'Something from outer space': Emu on the loose startles suburban NJ residents

Are these private VIP boxes the future of live concerts?

‘It’s The Hunger Games for Laboratories.’ Why Some People Are Waiting Weeks for Their COVID-19 Test Results

Stream It Or Skip It: ‘Rob Schneider: Asian Momma, Mexican Kids’ On Netflix, Where The SNL Alum Is Stuck In The Middle

Women with COVID give birth alone in Peru

Fox News threw everything but the kitchen sink at Kamala Harris