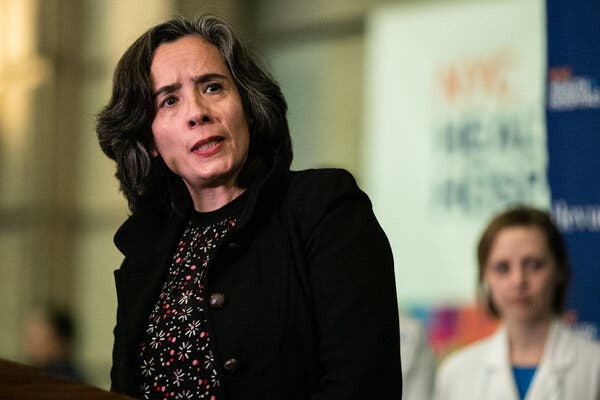 Dr. Oxiris Barbot, the health commissioner since 2018, has resigned.Credit...Jeenah Moon for The New York Times

New York has yet to see a resurgence of the coronavirus outbreak that ravaged the city in the spring. But still, as infections soar elsewhere in the country, Mayor Bill de Blasio and the city’s top health officials are grappling with complicated questions about how to reopen schools and businesses.

On Tuesday, one of those officials — Dr. Oxiris Barbot, the city’s health commissioner since 2018 — resigned in protest over the mayor’s decision-making.

“I leave my post today with deep disappointment that during the most critical public health crisis in our lifetime, that the Health Department’s incomparable disease control expertise was not used to the degree it could have been,” Dr. Barbot wrote in her resignation email.

For months, some health officials have been clashing with the mayor over his response to the crisis. Here’s what you need to know.

Dr. Barbot’s resignation came at a critical moment for the city’s Department of Health and Mental Hygiene: Public schools are set to partly reopen next month, and fears are growing that the fall could bring a second wave of the outbreak.

It also followed months of escalating tensions between City Hall and top health department officials over testing and public messaging, among other matters.

Then in May, The New York Post published an article about a conflict months earlier between Dr. Barbot and a police commander who wanted personal protective gear that had been allocated for health workers to be given instead to the police. Police unions and some elected officials called for her ouster.

He announced a new health commissioner, Dr. Dave A. Chokshi, a former senior leader at the public hospitals.

Public health officials had criticized Mr. de Blasio’s delays in closing schools and businesses in March, when New York became an epicenter of the pandemic.

For many days after the city’s first positive coronavirus test, Gov. Andrew M. Cuomo and Mr. de Blasio projected firm confidence that the outbreak would be contained. A Times investigation later found that efforts by state and city officials to stem the spread of the virus were hampered by their own confusing guidance and failure to heed warnings.

In early March, as the virus was silently spreading, some health officials threatened to quit if Mr. de Blasio did not lock down the city.

Soon he did so, without top officials resigning at the time.

Some current and former health officials said the departure of Dr. Barbot reflected Mr. de Blasio’s history of distrust of his health department. Lilliam Barrios-Paoli, a former deputy mayor for health under Mr. de Blasio who worked with Dr. Barbot, called it “a bad day for the city.”

Multiple City Council members tweeted their dismay about Dr. Barbot’s resignation. In a statement shared on social media, Councilwoman Carlina Rivera said, “I am disappointed that women in leadership like Dr. Barbot are pushed out after speaking their mind.”

After 6 Weeks, Victors Are Declared in 2 N.Y. Congressional Primaries

2.5 Million Lose Power and One Is Killed as Isaias Batters N.Y. Area

The Mayor Blames the Virus for Shootings. Here’s What Crime Data Shows.

A Police Department precinct in Harlem came under scrutiny after liking posts on Twitter that supported conspiracy theories. [The City]

The rapper Jay-Z is partnering with Long Island University to open a school for entertainment management. [Daily News]

And finally: Christmas with no Rockettes

For the first time in 87 years, the “Christmas Spectacular” at Radio City Music Hall won’t go on.

“We regret that the 2020 production of the ‘Christmas Spectacular Starring the Radio City Rockettes’” has been canceled, the show’s producer, Madison Square Garden Entertainment, said in a statement. The company cited “uncertainty associated with the Covid-19 pandemic,” making the production the latest mainstay to fall as the country continues to fight the outbreak.

More than 75 million people have seen the dancers perform since the Christmas show began in 1933, according to the Rockettes’ website. During a typical season, each of the 80 Rockettes performs up to four shows a day, with each one kicking up to 650 times.

[Read more about the canceled production.]

This year’s show was scheduled to run from Nov. 6 to Jan. 3. As the news broke, several of the dancers posted their own statements on Instagram.

“Christmas has officially been cancelled,” wrote Samantha Berger, who has been performing with the Rockettes for 15 seasons. “Until Next year,” she added with two broken-heart emojis. “Please Wear a Mask.”

The Rockettes are now selling tickets for November 2021, and many of the performers are holding out hope.

“We are in this together,” Danni Heverin wrote on Instagram. “Looking forward to the next time we can celebrate Christmas time again in NYC.”

It’s Wednesday — kick up your heels.

I was a tourist in town, walking up the east side of Central Park, when I saw a woman sitting on a stone bench inside the park.

It was midday, but she was dressed as if for a party. Her face was in her hands, and she was sobbing as if she had just lost everything in the world.

I make my living with words and pictures, and this one was perfect: the woman’s bright red dress, her perfectly coifed blonde hair, the gray stone and green leaves, the jarring contrast of beauty and grief.

The woman’s head was down, and my camera was ready. It would take only a second, and she would never know.

I couldn’t do it, not even to snap a photo for my eyes only. In this very public place, it was her private moment, and it could not belong to me. I longed to console her, but even that felt like a trespass.

I kept on walking, and silently wished her well.

New York Today is published weekdays around 6 a.m. Sign up here to get it by email. You can also find it at nytoday.com.

We’re experimenting with the format of New York Today. What would you like to see more (or less) of? Post a comment or email us: [email protected].

Barcelona's Interest in Isak Increased after Koeman's appointment. Larsson has a high opinion of the player (Mundo Seportivo)
Manuel Pellegrini: When you play against Real Madrid and var, it's too much
PSV and Porto are Interested in Barcelona midfielder PUC. He doesn't want to leave the club
Puyol about Barcelona: If we want to win the championship, we need to perform very well
Schalke sacked Wagner. The team has not won the Bundesliga since January
Iacini on 3:4 with Inter: Even a draw would be an unfair result, given how many chances Fiorentina created
Ramos Pro 3:2 with Betis: the Referee tried his best and didn't do anything intentionally
Source https://www.nytimes.com/2020/08/05/nyregion/oxiris-barbot-nyc-health-commissioner.html

Filly Swiss Skydiver to run against males in Preakness

Brad Parscale, Ex-Campaign Manager for Trump, Is Hospitalized in Florida

Pelosi preparing for House to decide presidency if neither Trump or Biden win electoral college: report

Brad Parscale Reportedly Surrenders Himself To Police After Wife's 911 Call