I was born with sarcoidosis -- a chronic inflammatory disease -- in my skin, but no one knew. It wasn't until I became an emancipated adult at 15 that I was diagnosed. I'd suffered extreme pain, photophobia and loss of vision for several days. 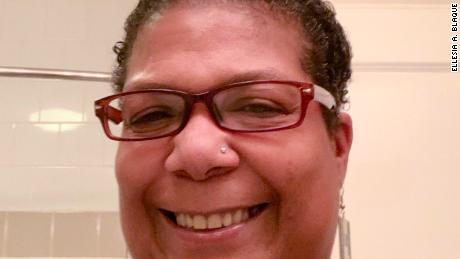 Upon diagnosis, the doctor flatly and coldly suggested that I "Learn Braille because you will be blind or dead before you turn 27." I remember my retort as if it were not nearly 44 years ago: "You are not God and you don't get to choose when I die or how I die." The doctor quickly wrote my first prescription for prednisone, a steroid used to treat diseases associated with inflammation. The prescription was for 80 milligrams per day, with five refills. He never explained to me that I would gain a massive amount of weight, that taking it would promote osteopetrosis and other disorders over time, or that one day, it may not even work and I would probably die without a substitute drug, which in 1978, was non-existent.

As he sent me on my way, ignoring the pain in my eyes, which felt like someone was hammering homebuilding nails into them, I felt tears rolling down my face. They burned my chubby cheeks as I walked the three miles back to my apartment, trying to see through the cotton eye patches that I was using to protect my eyes from the sunlight.

Over time, three things changed: the disease progressed, infecting my optic nerves and brain; the prednisone damaged my bones and agility; and I became a disabled woman well read on my disease, treatments and medical specialists. Yet, until I turned 39, one thing was constant: I was uninsurable.

And during the 14 years between diagnosis and my graduate school fellowship, which included healthcare insurance, I was forced to be a thief. I stole prescription pads and learned how to write them correctly. I stole my medication from the pharmacies with an order, grab and run sequence. I went to emergency rooms for care and gave fictitious names just to get my medication when the one prescription pad I stole was on its last page, in hopes that I could steal another. When I turned 40, the surgeries began and I thanked God I was insured; but I was angry that having been uninsured for decades, my body was ravaged by potentially deadly disorders that had never been diagnosed -- and no one cared, except me.

It was then that I became a medical advocate for myself, and in a few years, a medical advocate for others either asking for or open to help. This is what led me, a person who was unsure if I was even going to vote at all -- because I was frustrated with the systemic racism, police brutality and the recent stream of videos of racist Whites accosting Blacks in their daily lives -- to the town hall in Philadelphia on Tuesday.

I wanted to ask President Donald Trump if he would protect the lives of millions of people like me, who have serious, deadly pre-existing conditions and be our advocate for our right to live.

Rather than allowing me to finish my question -- as I had to respectfully demand him to do -- or answering my question directly and honestly, the leader of the free world made feel like an inanimate object. He rambled and repeated the same claim that a new health care plan -- better than the Affordable Care Act -- was on its way.

He addressed me in a way that made me feel like an inconvenience, rather than his forced constituent (I say forced because I didn't vote for him in 2016). Encountering my question, one that millions of other Americans have, seemed to be a circumstance he had to suffer through to promote his reelection.

Rather than seeing a human being asking for his support and help, perhaps all he saw was a fat Black woman -- a metaphoric rock in his shoe that, if not for saving face, he would have begrudgingly removed and resentfully thrown into the Schuylkill River on his way back to Air Force One.

When I walked into the National Constitution Center on Tuesday night, I wasn't sure if I would vote at all. Now, my vote is going to Joe Biden. For Americans, particularly those without a pre-existing medical condition who are still unsure if they want to participate this November, I ask that you consider this: One day you or a loved one may find yourselves in the same situation as me -- fighting for your life.

And after four years of Donald Trump attempting to dismantle the ACA, making promises he will never keep, and not devising a national plan to assure millions of Americans with pre-existing conditions will be able to afford coverage, I suggest you vote for the Joe Biden and Kamala Harris ticket.

Arsenal have not conceded at home for the first time since July 1. Goalkeeper Runarsson made his debut for the Londoners
Sandro Tonali: Milan on the crest of a wave. The Rossoneri shirt is pressing, but I'm getting in shape
Kadyrov's adviser hit the judge in the groin, and his son was dismissed from Akhmat and banned for three years. At first they all denied
AEK Carrera lost both matches in the Europa League with a total score of 1:5
Stefano Pioli: Milan have not achieved anything yet. The season is long, we will face difficulties
Mourinho 0:1 with Antwerp: the Best team won and the worst team lost
Bale did not make a performance in his first three games for Tottenham. He hasn't scored since January
Source https://edition.cnn.com/2020/09/18/opinions/trump-town-hall-philadelphia-health-care-undecided-voter-blaque/index.html?utm_source=feedburner&utm_medium=feed&utm_campaign=Feed%3A+rss%2Fcnn_latest+%28RSS%3A+CNN+-+Most+Recent%29

2020 Election Live Updates: "If Florida goes blue, it's over," Biden says as he and Trump campaign in Florida

Lawrence out, No. 1 Clemson looks for 10th straight over BC

Debris falls from supertall NYC skyscraper; no one injured

No. 1 Clemson dealing with rash of injuries on defense vs BC

Jason Blum Gets $11.4 Million for Historic Mansion in Off-Market Deal

French terror attacks are a stark warning to US voters

Which states have the most electoral votes?

‘We’ve got to stop the bleeding': Democrats sound alarm in Miami

How Tristan Thompson Supported Khloe Kardashian During Her Coronavirus Battle

Black leopard mauls man who paid to have pictures taken

'The Mandalorian' is back. This guide to 'Star Wars' lore will help you follow it

On COVID-19, Andrew Cuomo damned himself with his own words

Cam Newton on Patriots' struggles: 'Losing is not acceptable in this locker room'

O'Brien: Trump put an end to Obama-Biden 'leading from behind foreign policy' toward China

Superstore's Nico Santos On Keeping the Humor Amid the Pandemic Reality

Jeff Bridges shares update after Lymphoma diagnosis: 'This cancer is making me appreciate my mortality'

Parents, advocates in 2 Md. counties weigh in on back-to-classroom plans

Pompeo wraps up anti-China tour of Asia in Vietnam

2020 Daily Trail Markers: How ads from the two campaigns differ in the final sprint

Trump and Biden Converge in Florida, an Elusive Prize Still Up for Grabs

Yanks plan to exercise Britton option, not Gardner or Happ

Canceled Rose Parade Being Revived As A Variety Special

Karlie Kloss Is Pregnant! Look Back at Her and Joshua Kushner's Love Story

Americans, your vote matters for the planet's survival

Facebook doesn't censor conservatives. It plasters their views all over your feed.

Daily coronavirus cases reached a new high on Thursday with more than 83,700 cases

What's on TV Friday: 'My Big Italian Adventure' on HGTV