Republicans and Democrats largely ignore poor people because they do not expect them to vote at the same levels as their higher-income neighbors. But 2020 could change that. In the midst of the worst economic crisis since the Great Depression, campaigns that court low-income nonvoters by focusing on issues like expanding Medicare and raising wages could transform the political landscape.

The election for governor in Kentucky last year reveals the power of poor and low-income voters to do just that. Gov. Matt Bevin, an unpopular Republican incumbent who embraced austerity measures, was endorsed by President Trump, who had won Kentucky by 30 percentage points in 2016. When the Kentucky branch of the Poor People’s Campaign, which builds coalitions to address issues affecting poor and low-income people, invited organizations of low-wage workers and health care advocates in Lexington and Louisville to join coal miners from Appalachia in a movement to motivate nonvoters, the tide of the election started to shift. Low-income people began to talk to one another about how much they had in common. These new relationships helped foster a sense of commitment. These people stood together in churches and told their stories of poverty, marched together on the Statehouse in Frankfort and canvassed neighborhoods together to talk with residents about the issues that mattered to them. People who often feel ignored by political campaigns shifted the public conversation.

Mr. Bevin had used the tropes of Christian nationalism to cast his pro-corporate policies as anti-abortion, but everyday Kentuckians spoke out to say that health care, living wages and voting rights were moral issues to them. Mr. Bevin’s Democratic challenger, Andy Beshear, courted those voters and inspired a turnout 44 percent higher than the turnout four years earlier, including many low-wage voters who cast ballots for the first time. 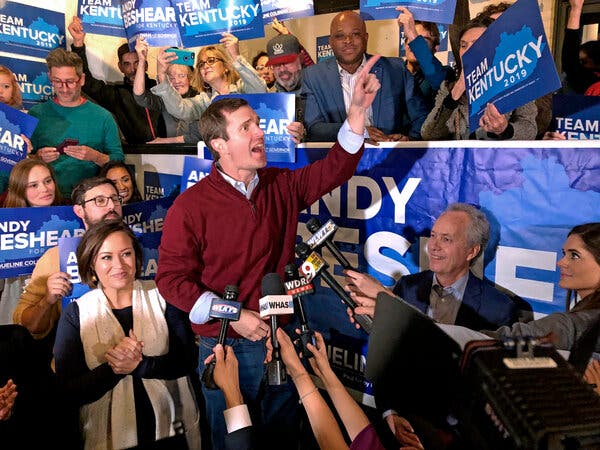 While voter participation surged in the traditional Democratic strongholds of Fayette and Jefferson Counties by 18 and 13 percentage points, respectively, an increase of 11 to 16 percentage points in rural Kenton, Scott, Campbell and Warren Counties flipped areas of the state that had long been considered red. Mr. Beshear defeated Mr. Bevin in 2019 not only because of an increased turnout in blue counties, but also because a higher turnout of low-income voters changed the landscape in red counties. In a race that was decided by 5,100 votes, he needed the increased turnout in rural, majority-white counties.

That could happen around the country in November if campaigns and candidates follow Kentucky’s example.

In presidential elections, low-income-voter turnout over the past 36 years has consistently been 20 percentage points below that of higher income voters, according to a new report from the Poor People’s Campaign. The report shows that eligible nonvoters across income brackets in 2016 reported the same top reasons for not voting: They didn’t feel they were represented by the candidates who were running, or they didn’t think their vote would make a difference. Among the 34 million poor and low-income Americans eligible to vote, those views, combined with an array of voter-suppression measures, kept many away from the polls. Mr. Trump’s actual base of support was made up of wealthier Americans, and he lost handily among low-income voters.

If poor people voted at levels similar to their higher-income neighbors’, not only could their voting power flip swing states, but also, according to the report, they could crack the “Solid South” that Republicans have counted on for decades by flipping North Carolina, Georgia, Florida, Mississippi, Texas and Arizona.

A road to victory through the South for Democrats in 2020 would be transformative because it could also unexpectedly add Senate seats in these so-called red states, resulting in governing majorities in the House and the Senate that could pass federal anti-poverty legislation. While Senate seats in Colorado, Arizona, Maine and North Carolina are the most likely to flip, according to current polling, a surge in low-income voters could open a path to victory in places like Georgia, Mississippi and even Kentucky.

Though it may seem counterintuitive for Democrats to invest heavily in states that Republicans have controlled for decades, our organizing among poor and low-income voters suggests they can be mobilized by campaigns that look past tired partisan divides to directly address their needs.

For far too long, Republicans have maintained power in high-poverty states by working to keep low-income-voter participation down. And Democrats have too easily accepted that their political fortunes depend on increasing turnout in reliably blue districts or so-called purple states, like our home state, North Carolina. But a broad coalition of low-income Black, white and Latino voters stands ready to turn out in record numbers for candidates who speak to the needs of poor and low-income people.

While we are encouraged that the Democratic Party has included plans for “Ending Poverty” in its draft platform, candidates and campaigns need to take this message directly to the people. A historic low-income-voter turnout in 2020 would mean a victory for Democrats, not only in the Rust Belt but also in less expected places across the Bible Belt. It would also mean much more than a change of the party in power in Washington: It would guarantee that neither Democrats nor Republicans could overlook the needs of poor and low-income Americans in the years to come.

William Barber II (@RevDrBarber) is the president of Repairers of the Breach and a co-chairman of the Poor People’s Campaign. His most recent book is “We Are Called to Be a Movement.” Jonathan Wilson-Hartgrove (@wilsonhartgrove), a steering committee member at the campaign, is the author of “Revolution of Values: Reclaiming Public Faith for the Common Good.”

Barcelona's Interest in Isak Increased after Koeman's appointment. Larsson has a high opinion of the player (Mundo Seportivo)
Manuel Pellegrini: When you play against Real Madrid and var, it's too much
PSV and Porto are Interested in Barcelona midfielder PUC. He doesn't want to leave the club
Puyol about Barcelona: If we want to win the championship, we need to perform very well
Schalke sacked Wagner. The team has not won the Bundesliga since January
Iacini on 3:4 with Inter: Even a draw would be an unfair result, given how many chances Fiorentina created
Ramos Pro 3:2 with Betis: the Referee tried his best and didn't do anything intentionally
Source https://www.nytimes.com/2020/08/11/opinion/2020-low-income-voters.html

Wildfire with 'dangerous rate of spread' burning in Napa County

He lost his brother to Covid-19. Twelve days later, he died, too

NFL picks for Week 3: Beat up 49ers still have enough to top Giants

Steve Doocy: If you invite the president of the US to your house, you really should tell your spouse

Book excerpt: "The Office of Historical Corrections" by Danielle Evans

Trump has stacked the federal bench, but he's not winning many election court battles

Tejashwi Yadav ahead of Bihar Assembly elections: 'Will fill 10 lakh vacancies soon after returning to power'

Schumer to Democrats: Focus on health care to beat Barrett

No forgiveness: Small businesses still on hook for rescue loans

Some Black Americans Buying Guns: 'I'd Rather Go To Trial Than Go To The Cemetery'

Giants vs. 49ers: Preview, predictions, what to watch for

Big companies are swallowing up smaller ones. Why that's not good for the economy

Harmeet Dhillon: Amy Coney Barrett could have major impact on these landmark cases in Supreme Court

The Week in Business: The Recovery Hits a Wall

Trump is fuzzy on tax policy as Biden goes all in

Fighting erupts between Armenia and Azerbaijan over disputed region

The Latest: Azarenka frustrated by cold, damp at French Open

Jets vs. Colts: Preview, predictions, what to watch for

Newt Gingrich: How the Bidens worked with China to get rich — at America's expense

Trump has the votes in court fight, but Democrats have the political edge

How Trump's base appeals have backfired

Analysis: How Trump's base appeals have backfired

Critic Charles Finch on Reading Hundreds of Books a Year

Martial Law, Total Mobilization in Armenia After Clashes with Azerbaijan

Black-owned gay bars are dwindling. Can they survive Covid?

Everything coming to and leaving Netflix in October 2020

Black Americans are #sickandtired of the lack of justice for police killings. The Breonna Taylor decision is yet another disappointment

E.P.A. to Promote Lead Testing Rule As Trump Tries to Burnish His Record

There’s Gold in Them Thar Braes

Sudan Is Focus of U.S. Efforts to Improve Ties With Israel

By Lowering the Debate Bar for Biden, Has Trump Set a Trap for Himself?

In a Book About Trauma, She Hopes to Show What Survival Looks Like

Trump Isn’t Trying to Win. Cheating Is All He Has Left.