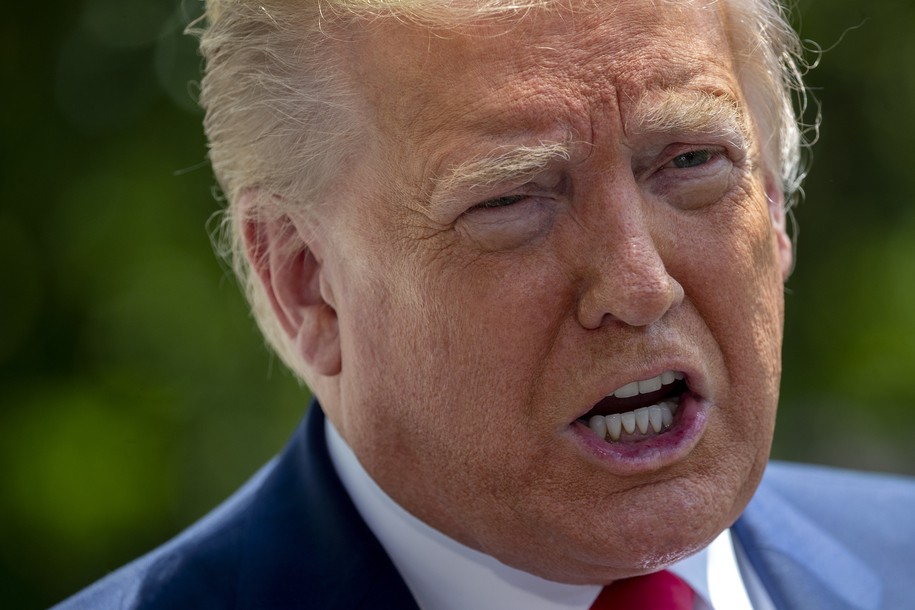 In a typically lie-strewn White House press event, Trump Press Secretary Kayleigh McEnany gave a completely nonsensical answer to questions about just who ordered the attack on protesters around and at St. John's Church in the minutes before Donald Trump announced he would be walking there. Did Trump give the order to attack? Did Attorney General Barr give that order? In a sign of just how very much nobody in the White House wants to be associated with what now seems self-evidently an illegal act, the empty-souled talking head McEnany was abstract about the precise details of who ordered that action.

McEnany, who lies repeatedly during each event, noted that Attorney General William Barr "decided that morning" to expand the perimeter around the White House. (Note: The United States attorney general is not in charge of the security configuration of the White House.) But she also confirmed that Trump gave "an order" indicating he wished to "go to the church."

"When the president gives an order, people act. It's not as if he needs to walk through every detail of how a plan goes about. He says 'I want to go to the church,' he goes to the church and everyone executes the plan and the order that the president puts into place."

But was, pressed a reporter, "the plan still for the president to walk out there, even if the protesters were still there?"

"I'm not aware of the determinations that the Secret Service had as they arranged for the president to walk out there," said McEnany, but "I would just note again that the decision to expand the perimeter was a decision made in the morning by Attorney General Barr." (Note: The United States attorney general is not in charge of the Secret Service and cannot give those orders, and something has gone extremely wrong if he has seized command of those forces. McEnany is either lying to the nation or confirming that a slow-rolling coup is currently taking place.)

Translation: Whatever the plan was, the plan turned out to be that in the minutes immediately after Trump's short speech was to start, when news networks had already turned their cameras on the Rose Garden, it was exactly then that forces around the White House began firing flash-bang grenades, tear gas, and rubber bullets at the crowd in order to clear the peaceful protest immediately. Numerous reporters at the scene confirmed that there was no violence at the location and no warning was given before the attack.

Because protesters were assembled at the church he "wanted" to stand in front of, Donald Trump, a fascist and traitor to his oath and nation, had multiple options available to him. He could have decided not to go. He could have decided to meet with the protesters, walking through them with a full contingent of troops and Secret Service officers if that is what the lifelong coward needed to feel safe.

Or he could have simply delayed his carnival side show for a mere 30 minutes or so—Trump has repeatedly kept reporters waiting for long periods for no reason, or possibly because he could not be pulled away from a particular television show—to allow officers to push protesting Americans back more slowly, less violently, and without engaging in a no-warning history-shaking show of dictatorial paramilitary force. That is all it would have taken.

Trump chose to do none of these things because the obvious Trump intent, in delaying his short speech after gaining network attention and only at that moment ordering the immediate clearing of the park and church, was for the networks to broadcast his attack. There can be no question about that. Trump “ordered” federal personnel to take action he knew would include violence, and timed the attack so that the nation would be watching. William Barr “executed” that order, as did whichever federal officers were in the actual, non-Barr chain of command.

Kimmich is recognized as the best defender of the 2019/20 Champions League
UEFA posted a photo of Messi and Ronaldo: together again
Liverpool will play against Atalanta Miranchuk and Ajax in group D of the Champions League
Neuer is recognized as the best goalkeeper of the 2019/20 Champions League
Drogba received a presidential award UEFA
Calvert-Lewin, Saka and Barnes are called up to the England team for the first time. Maguire returned to the squad
Lazio leases Pereira from Manchester United with a buy-out option for 27 million euros. Potentially the biggest transfer in the history of Rome
Source https://www.dailykos.com/stories/2020/6/3/1950204/-White-House-confirms-Trump-gave-order-resulting-in-assault-on-St-John-s-Church

3 Things LeBron James Can Teach You About Business Growth

US Secretary of Defense makes rare visit to Algeria

Why record UK house prices could be falling again soon

'What can we do different?' Louisville police chief gets her chance to lead during a tumultuous time

Understanding critical race theory: What it is -- and isn't

In Argentina, nearly half in poverty as coronavirus deepens economic crisis

Earnings expected to plunge again but there are hopeful signs

How we can avoid an election disaster

Amid coronavirus, entrepreneurs in Cuba reinvent to survive

The Armenia-Azerbaijan Fighting Could Spiral Into A Larger Regional Conflict

Why I’m Teaching My Kids That Computers Are Dumb Machines

What is TikTok? And what does President Trump have to do with it?

Lawrie to quit European Tour after this week’s Scottish Open

Montana mail-in voting: What to know

A first in 187 days — no coronavirus deaths in Maryland

Yes, the drive-thru is slower — service time has increased by 30 seconds as demand soars during pandemic

Gird Yourselves for a Biden Presidency

Chris Wallace on the debate: ‘Never dreamt it would go off the tracks the way it did’

After ruling K-pop, BLACKPINK aim to takeover pop world too

The best Zulily deals to shop this week, according to our editors

Prime members can save $50 on Audible's yearly subscription

Twitter down: Thousands of users say app not working globally

How Donald Trump completely whiffed on his debate mask answer

Frederick Wiseman on the life of American institutions