A number of countries around the world have been lockdown for weeks in an effort to "flatten the curve" and reduce the spread of coronavirus. Flattening the curve does not necessarily mean seeing a decrease in total cases right away; it would first produce a decline in the number of new cases, which should result in fewer hospitalizations and death in the weeks that follow.

By flattening the curve, officials hope to ensure that the health care system doesn't become overwhelmed and unable to help those who need it. With some of the most affected countries like Spain and Italy on lockdown for weeks, many are wondering if their efforts are actually working.

Here's what data from Johns Hopkins can show us:

Italy has been under a nationwide lockdown for about four weeks and the country has begun to flatten the curve. Italy hit its apparent peak in daily cases on March 20, with more than 6,000 new cases that day. On March 29 and 30, Italy saw a drop in daily cases for two consecutive days.

Since then, the number of daily cases has stayed between 4,000 and about 4,800. When looking at the growth of the virus over time in Italy, it appears the curve is flattening. 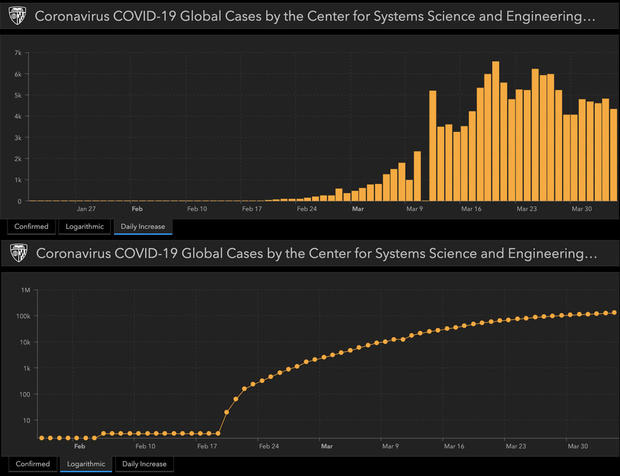 A chart of Italy's daily new coronavirus cases (top) and a logarithmic graph, as of April 4, show the daily increase in cases has slowed, and the country seems to be "flattening the curve." There are still over 4,000 new cases each day, but there has not been a massive spike in new cases in recent days. Johns Hopkins

Spain now has more confirmed cases than Italy, with over 135,000. A peak in daily cases occurred on the March 24, with more than 9,000 cases reported that day. However, the daily increase has continue to drop in recent days. Starting on April 1, Spain saw a drop in daily cases for four consecutive days.

Similar to Italy, when looking at a graph of the virus' spread over time, it appears Spain is starting to flatten the curve. 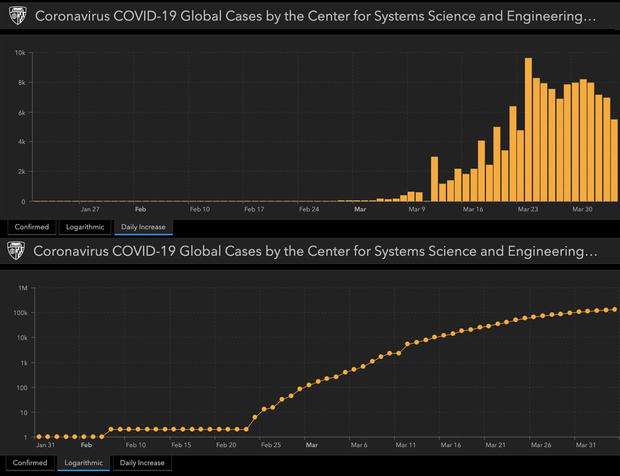 A chart of Spain's daily new coronavirus cases (top) and a logarithmic graph, as of April 4, show the daily number of new cases has slowed, although there are still more than 5,000 new cases per day, and the country seems to be "flattening the curve." Johns Hopkins

France has been on lockdown for about the same amount of time as Spain. The growth of the virus has been steady recently, except for a spike on April 3, which could have been caused by new reporting measures. Last week, the country also saw a spike in deaths after the health ministry began including nursing home fatalities in its data, according to Reuters.

France's curve has not completely flattened (as of April 4) but the daily increases have started to slow, save for April 3 when the number of new cases jumped, possibly due to a backlog of cases being reported. Johns Hopkins

China saw a huge spike in new cases on one day, with over 15,000 new cases on February 12. However, the growth significantly slowed after that. Hubei province, where the virus originated, went on lockdown at the end of January. More and more areas of the country were later locked down, but restrictions in some areas have already been lifted.

Wuhan's lockdown is set to be lifted on April 8, nearly two and a half months after it was imposed.

There has been doubt raised by President Trump and health officials around the world about whether China is releasing accurate data on its number of cases.

China, where the virus originated, has been locked down the longest. Although the country did flatten its curve, it has been under a lockdown much longer than most countries.  Johns Hopkins

Austria has managed to prevent a huge spike in daily cases since March 29. The country has been shut down for about three weeks and its government says that may be enough. Austria plans to start reopening shops next week, although it will require residents to wear masks, according to Reuters.

"We reacted faster and more restrictively than in other countries and could therefore avoid the worst. But this fast and restrictive reaction now also gives us the possibility to come out of this crisis more quickly," Chancellor Sebastian Kurz said.

Like Austria, Germany plans to reopen soon. The country has been under a lockdown since March 22 and became the fourth country to top 100,000 cases. Still, officials hope to return to normal life on April 19 — that's just under a month of lockdown. According to Reuters, Germany would implement a list of steps including mandatory mask-wearing in public and limits on gatherings.

The earliest statewide "stay at home" order began in California on March 19 and New York soon followed. The majority of states have since done the same, although a few governors are still holding out.

U.S. health officials predict the peak lies ahead, with President Trump warning of a "hell of a bad two weeks" to come.

The U.S. has more cases confirmed than any other country, with over 337,000 as of Monday, according to Johns Hopkins. Only some parts of the country, like California, have showed evidence of flattening the curve.

In New York, the current epicenter of the virus, Governor Andrew Cuomo said on April 2 that the state's apex, or "battle of the mountaintop," could come this week or next, CBS New York reported. On Monday, Cuomo said the number of new cases appears to have leveled off in the last few days.

"It could still go any way. We could still see an increase," Cuomo said Monday. "It still depends on what we do."

Josep Bartomeu: Setien is doing a great job. We have full confidence in him
Pique on La Liga: Barca do not like to fall behind, but we have made every effort to change the situation
Pep Pro 0:1 with Southampton: city liked the Game, but it's not enough to win
Mandzukic is Interesting to Fenerbahce and Galatasaray. It is also claimed by Loco and Milan
Messi wants to finish his career at Barca. Bartomeu believes that Leo will not leave in a year
Gasperini about Atalanta: we Want to reach the Champions League and break the club's record for points in Serie A
Hames can leave Real Madrid for the Premier League for 25 million euros. A year ago, Atletico and Napoli offered 45-50 million euros for him. Real Madrid Midfielder Hames Rodriguez is likely to change clubs at the end of the season
Source https://www.cbsnews.com/news/which-countries-flatten-the-curve-coronavirus-graphs-when-will-united-states/

The Louvre Partly Reopened After Being Shut Down for 16 weeks

800,000 Indians may be forced to leave as Kuwait clears draft expat quota bill

Want To Create A Better Mask? It's Harder Than It Seams

Everyone’s an Antiracist. Now What?

I’m a Direct Descendant of Thomas Jefferson. Take Down His Memorial.

How to Sell Your Rape Story

Will We Be Hostages to Drug Makers’ Covid Vaccine Pricing?

(Let Us Out of This Clause)

Coronavirus updates: US reports over 49,000 new cases in a single day