Where Police Reform Has Worked 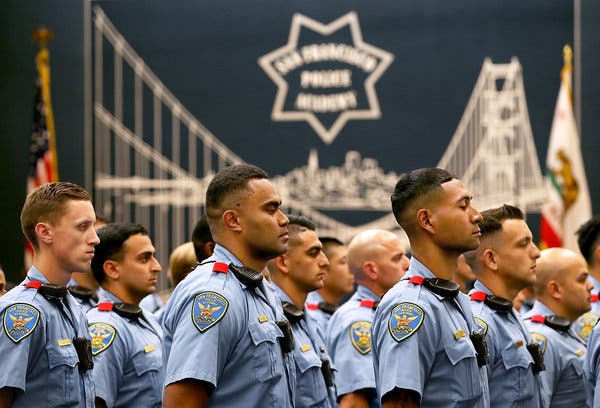 In several big cities, however, things have changed. Police departments have adopted new policies, and, while problems remain, the number of shootings and deaths have fallen significantly.

It’s happened in Los Angeles, where fatal police shootings have declined in each of the last four years, down to 12 last year. It’s happened in San Francisco. And it’s happened in Baltimore, Chicago, Philadelphia and Phoenix, Samuel Sinyangwe, a data scientist and activist, writes for FiveThirtyEight. “Many of these reforms were initiated in response to protests and public outcry over high-profile deaths,” he adds.

The most sweeping proposals to emerge in recent days, like defunding the police, are unlikely to attract broad political support. Many Americans feel positively toward the police, as David Byler of The Washington Post points out — although there are large gaps by race.

Still, most Americans also say that the police have a racism problem, and most favor reforms, such as body cameras and outside investigations of misconduct. Drew Linzer of the polling firm Civiqs notes that support for the Black Lives Matter movement surged in recent days to almost 50 percent, “the highest it has ever been in over three years of polling.”

All of which points to some common political ground on police reform. “The problem is not that we lack a playbook for fixing the police,” a former police commissioner in Philadelphia and three other experts write for the Times Opinion section. “We have one. The problem is that we have not successfully followed the one we have.” Barack Obama posted a Twitter thread last night making similar points.

Why hasn’t reform worked in Minneapolis? The police department “failed to set clear criteria on the use of force and de-escalation,” Jamiles Lartey and Simone Weichselbaum of The Marshall Project report. The department also failed to “weed out bad cops” and “continued to use choke holds.”

After the memorial service for George Floyd in Minneapolis yesterday.Credit...Alyssa Schukar for The New York Times

A memorial service on Thursday for George Floyd was by turns personal and political, celebrating both the life he had lived and the movement that his death has inspired. Floyd’s brother Philonise recalled playing football and eating banana-and-mayonnaise sandwiches; one of his cousins, Shareeduh Tate, said, “The thing I miss most about him is his hugs.”

In a defiant eulogy, the Rev. Al Sharpton said: “George Floyd’s story has been the story of black folks. Because ever since 401 years ago, the reason we could never be who we wanted and dreamed of being is you kept your knee on our neck.” Later, with the crowd rising, he added, “It’s time for us to stand up in George’s name and say, ‘Get your knee off our necks.’”

More developments from the protests:

2. Some good news on the virus

If you look at one of the charts tracking the coronavirus in the U.S., you’ll probably notice a disturbing pattern: The number of new cases has virtually stopped falling, hovering around 20,000 for the past 10 days.

But the actual trend may be more encouraging. The number of tests being conducted has been rising rapidly in recent weeks — which means more virus cases are being uncovered than otherwise would have been. Another key measure is the percentage of tests that come back positive (as Nate Silver of FiveThirtyEight has argued), and it has continued to decline:

Taken together, the various measures suggest that the virus’s spread continues to slow — but only modestly and not as rapidly as in some other countries.

3. An economic burden for women

The lockdown has already created burdens for mothers. They have taken on a disproportionate share of day care, home schooling and housework, research has shown. Now the reopening of many workplaces may cause a new set of problems.

The lack of child care options — with day care centers, camps and schools closed — may force women out of the labor force to take care of their children. And even temporary time away from a job often brings permanent costs, in terms of missed promotions and opportunities, as Patricia Cohen and Tiffany Hsu of The Times explain. “The limited gains made in the past decades are at risk of being rolled back,” concluded a U.N. report on the virus’s impact on women.

BACK STORY: Teaching your kids about racism

How should parents discuss race with their children? Start early, and keep the conversation going. Talk about racial differences in positive ways. Make sure any home library has books with black protagonists.

These suggestions — and many more — come from Jessica Grose, editor of The Times’s Parenting section. She spoke with experts and wrote up a list of suggested books. She told us:

We wanted to provide information for parents who want to have conversations with their children about racism and the protests over the killing of George Floyd. We also wanted to make clear that it’s a privilege to choose to have these conversations; as many of my sources emphasized, black families are having and have been having these conversations, and reading these books.

The big takeaway here is that nonblack families don’t just need to talk about racism with their kids — they need to show their kids they are also taking action.

One comment, from Jacqueline Dougé, a pediatrician and child health advocate based in Maryland, really stuck with me: “Because of our culture, I have a heavy burden as a black mom. But if I think my kids are going to end racism alone, I’m deluded.”

More resources: Jessica also recommends the conversation guides from EmbraceRace and Raising Race Conscious Children. And you can subscribe to Jessica’s newsletter here.

Stick this sauce on everything

Lemon goop, syrup and vinaigrette.Credit...Gentl and Hyers for The New York Times

What is lemon goop? It is somewhere between lemon marmalade and a salty, tangy jam. Stewed lemons, sugar and sea salt are turned into what is technically a condiment, though the cookbook author Dorie Greenspan prefers to call it a “transformer” — for seafood, veggies and more.

Here is Greenspan’s guide to making it.

For fans of Sally Rooney

“Exciting Times,” the debut novel by author Naoise Dolan, follows a young Irishwoman as she becomes entrenched in the lives of Hong Kong’s elite. It’s already drawing comparisons to the work of another acclaimed young Irish novelist, Sally Rooney.

Our reviewer, Xuan Juliana Wang, writes that “jealousy and obsession, love and late capitalism, sex and the internet all come whirling together in a wry and bracing tale of class and privilege.”

Our weekly suggestion from Gilbert Cruz, The Times’s Culture editor:

Next Friday, the latest Spike Lee film, “Da 5 Bloods,” will be released on Netflix. It’s about a group of black vets who go back to Vietnam on a personal mission decades after the war. (A trailer is here.) Lee is an essential American filmmaker and there’s never a bad time to go through his filmography. Until then, I strongly recommend you make time for (or rewatch) “Do the Right Thing.”

The 30-year-old film about the tensions that grow over the course of a hot day on a Brooklyn block, resulting in a terrible act of violence, has always felt vital but feels particularly urgent again. “Do the Right Thing” is simultaneously blunt and subtle — appropriate for a film that embraces duality, that makes room for the philosophies of Martin Luther King Jr. and Malcolm X, that makes its viewers both like and dislike almost everyone in it. Recently, our co-chief film critics rewatched it and declared it still a towering achievement. That’s the truth, Ruth.

Or try this week’s news quiz.

You can find all of our puzzles here.

Thanks for spending part of your morning with The Times. See you next week. — David

In today’s episode of “The Daily,” five protesters discuss what brought them out to the streets. And listen to the series finale of “Rabbit Hole,” our podcast about what becomes of our lives as we move online.

The Times is providing free access to much of our coronavirus coverage. Please consider supporting our journalism with a subscription.

Ian Prasad Philbrick and Sanam Yar contributed to The Morning. You can reach the team at [email protected].

Napoli will pay about 81 million euros for Osimhen. Medical check-up is scheduled for Thursday
Jose Mourinho: Financial fair play is dead. It is better to open the doors to the circus, let everyone have fun
🟡 The new Barca uniform is inspired by the 1920s, the club's first Golden period. The checkers were removed, and the replica is not being sold yet because of the marriage
We study the environmental damage caused by flights in football. Leader of the anti-rating of dirty players-2019-suddenly Marquinhos
Pep Guardiola: We didn't expect Liverpool, Tottenham, Arsenal, Chelsea to protect us, but we are able to protect ourselves
Barcelona and PSG want to sign Alaba for free in a year
Lokomotiv – CSKA. Who will win the last top match of the season?
Source https://www.nytimes.com/2020/06/05/briefing/george-floyd-buffalo-coronavirus-your-friday-briefing.html

Meghan McCain Goes Off During Cancel Culture Debate: It’s a “Miracle” I’m Still on ‘The View’

Vampire-slaying kit with Bible, crucifix and gun goes to auction