Anthony Reid barely remembers the blow that knocked him out.

A 62-year-old public bus driver in New York, Mr. Reid was on his last run in East New York, Brooklyn, when passengers complained that a man in the back was not wearing a face covering. Mr. Reid pulled over and called out to the man, reminding him that masks were required on public transportation.

Then everything went dark.

He woke up in the back of an ambulance, his left eye swollen shut and the taste of warm blood in his mouth. The maskless passenger had attacked him from behind, the paramedics told him.

“It was a calm exchange with him, but then he just knocked me out cold,” said Mr. Reid, who is still recovering from his eye injury he suffered on that July night.

As cities emerge from lockdowns and people return to public spaces, the new cultural wars over wearing a mask — or refusing to — have sparked confrontations in retail stores, parks and restaurants.

But in New York, where mask compliance has been generally high in most indoor settings, many of these confrontations are playing out on buses, where dozens of drivers have been attacked after trying to enforce the rules.

The frequent attacks have become so alarming that transit officials are now imposing $50 fines on riders who fail to wear masks on buses and subways in an effort to crack down on uncooperative passengers and make workers safer.

“This is a last resort for those very few people who refuse to wear a mask when offered,” said Sarah Feinberg, interim president of New York City Transit, which runs the city’s subway and buses.

Since mid-April, when Gov. Andrew M. Cuomo mandated that people wear masks on public transportation, there have been at least 177 instances of transit workers being harassed or assaulted by riders who refuse to wear face coverings or follow social-distancing protocols. Of those incidents, 95 percent occurred on buses, according to the transit agency. At least two people have been charged with assaulting transit workers in coronavirus-related confrontations.

Even before the pandemic swept across New York, bus drivers were already particularly vulnerable to assault: The Police Department does not have a unit dedicated to patrolling the bus network, and unlike their counterparts in the subway, drivers come into direct contact with passengers who may be agitated or mentally ill.

At the height of the pandemic this spring, bus drivers were on the front lines working at great personal risk. Over 4,000 transit workers got sick and 131 died from the coronavirus.

Since then, the outbreak has receded in New York and 45 percent of the bus network’s usual ridership has returned. But disputes among passengers over wearing masks have become common, forcing drivers to intervene.

When someone boards their bus without a mask, drivers say they are faced with a grim choice: say nothing and risk that an infected rider will spread the virus, or tell the passenger to put on a mask and risk a violent reaction.

“When you confront someone, it can escalate quickly. He could spit on you, he could throw something at you, he could hurt another passenger,” said Alexander Kemp, a bus driver in Brooklyn. “But what if that person is sick and contaminates everyone on this bus? And you could have prevented that?” 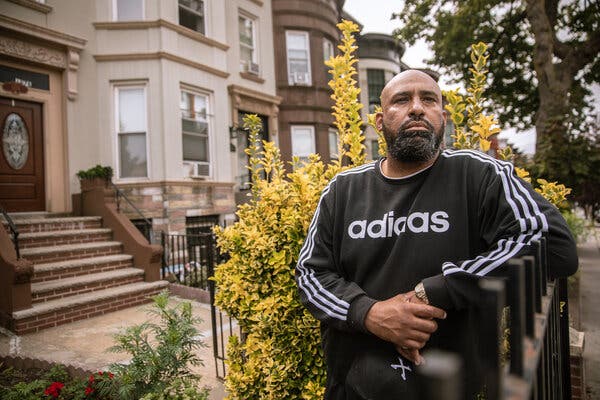 “When you confront someone, it can escalate quickly,’’ said Alexander Kemp, a bus driver. “He could spit on you, he could throw something at you, he could hurt another passenger.” Credit...Amr Alfiky/The New York Times

After Mr. Kemp asked a passenger recently to put on a face covering, the man started screaming profanities and throwing punches into the air around other passengers. The passenger approached the driver’s seat and stared Mr. Kemp down for a few seconds, he said, before storming off the bus. No one was injured.

But in cities around the world, as drivers gamble with their safety to protect public health, similar confrontations have turned far more violent, sometimes with deadly consequences.

In France, a bus driver in Bayonne, a city in the southwestern part of the country, was beaten to death by four passengers in July after he asked them to put on masks. The same month, a passenger in Lubbock, Texas, hit a bus driver with a two-by-four and smashed her window after she asked him to put on a mask.

In San Francisco, three men beat a driver with a baseball bat when he ordered them off a bus for refusing to put on a mask — one of 72 mask-related altercations the authorities have logged on streetcars and buses in the city between the end of April and beginning of September.

The Metropolitan Transportation Authority, which oversees the city’s subway, buses and two commuter rails, has made millions of free masks available to riders in all subway stations and has equipped 6 percent of its bus fleet with free mask dispensers in a pilot program.

The agency has also rolled out digital posters, public service announcements and social media campaigns to remind riders that masks are mandatory in the transit system.

The M.T.A.’s own police force, along with city officers assigned to patrol the subway system, can eject passengers who refuse to wear a mask and issue a fine. In August, the transit agency also directed 160 M.T.A. police officers to patrol buses.

Transit officials say this multipronged approach appears to be working: Observational studies conducted by the agency have found that roughly 90 percent of riders wear masks.

But many bus drivers say mask usage varies greatly by neighborhood and tends to be worse outside Manhattan. In July, a survey by the Transport Workers Union, which represent most M.T.A. workers, found that some bus routes had mask compliance rates as low as 61 percent.

“We need mask dispensers on all buses and we need more enforcement, so if people aren’t following the rules, they can be escorted out of the bus by the police,” said Tony Utano, the president of the Transport Workers Union Local 100, which represents M.T.A. workers.

Still, the increased patrols have also fueled concerns that punitive measures could fall disproportionately on the city’s Black and brown communities, given the police department’s history of racial bias in cracking down on fare evasion and low-level offenses in the subway. Many bus riders, especially outside Manhattan, are people of color.

“The police’s record here in terms of fare evasion was conclusively not equitable,” said David Jones, an M.T.A. board member and president of the Community Service Society of New York, an antipoverty nonprofit. “Things could be exacerbated now even further because the people using public transportation are lower-wage workers. Now suddenly you are going to be giving out fines people can’t afford to pay.”

The Police Department’s role in enforcing public health mandates has already drawn criticism: At the height of the pandemic this spring, viral videos of officers arresting Black and Hispanic residents over social-distancing rules — while other photos showed officers handing out masks to white people in crowded parks — sparked outrage. Some elected officials accused the police of a racist double standard.

The police have denied any racial bias, but the city has taken a more hands-off approach in enforcing social-distancing rules.

Transit officials said M.T.A. police and the city’s Police Department would impose the new $50 mask fines, though N.Y.P.D. officers have come under scrutiny themselves for not wearing masks when on patrol.

The police commissioner said that fines were a last resort.

“We are not looking to have summonses issued, give summonses, and further hurt people that are already hurt in New York City,” the commissioner, Dermot Shea, told NY1 on Monday. “But we want compliance, that’s the message.”

Many drivers say they are worried that the situation will only get more fraught as schools reopen and buses become more crowded.

“The buses are packed now, and schools aren’t even open yet,” said Wayne Lizardi, 49, a bus driver who works in the Bronx. “Once it’s back to normal, the lack of distance, the mask issue, it’s all going to be even worse.”

Barcelona confirmed the resignation of Bartomeu as President
Joshua Kimmich: We should have finished the game with Lokomotiv earlier, but we didn't have any obvious moments
Manuel Neuer: Loko played very well. Bayern had to work hard to win
Lewandowski has not scored a point in two rounds of the Champions League. Last season, he failed to do so only in the final
Bayern extended their record streak to 13 consecutive wins in the Champions League
Ronaldo will not play Barcelona (Romeo Agresti)
Ole Gunnar Solskjaer: Leipzig impressive progresses. He is aiming for trophies
Source https://www.nytimes.com/2020/09/18/nyregion/bus-drivers-nyc-assault-face-mask.html