With the state on track to reopen Friday, and Chicago’s reopening set for early June, many folks throughout the city and state will now be able to gather in groups of 10 or fewer. But with all the excitement and restlessness of being able to see and spend time with loved ones after being isolated from them for more than two months, there are still a few safety precautions to keep in mind.

The general rule of thumb is that outside is better than inside, and masks are better than no masks, said Dr. Emily Landon, executive medical director of Infection Prevention and Control at the University of Chicago Medicine.

“Indoor activities that involve eating and drinking are sort of the last thing you want to do,” she said.

It seems safe for us to start having more contact with people we haven’t been quarantined with since certain regions of the state have met Gov. J.B. Pritzker’s measurements to move into the next phase, but we want to use these new human encounters sparingly and carefully, almost looking at the governor’s stipulation of 10 or fewer as a guide, Landon said.

The reason behind this suggestion is to decrease your social net and risk of contracting COVID-19. For instance, if you have unprotected contact with a group of people, you’re taking on some amount of risk, and not only does that risk stay with you, but you pass it on to the next group of people you’re with, explained Landon.

“As we go forward, and we have our first ventures out with people who we weren’t quarantining with, or staying home with in the stay-at-home period, those activities are going to be more risky than we might imagine,” she said. 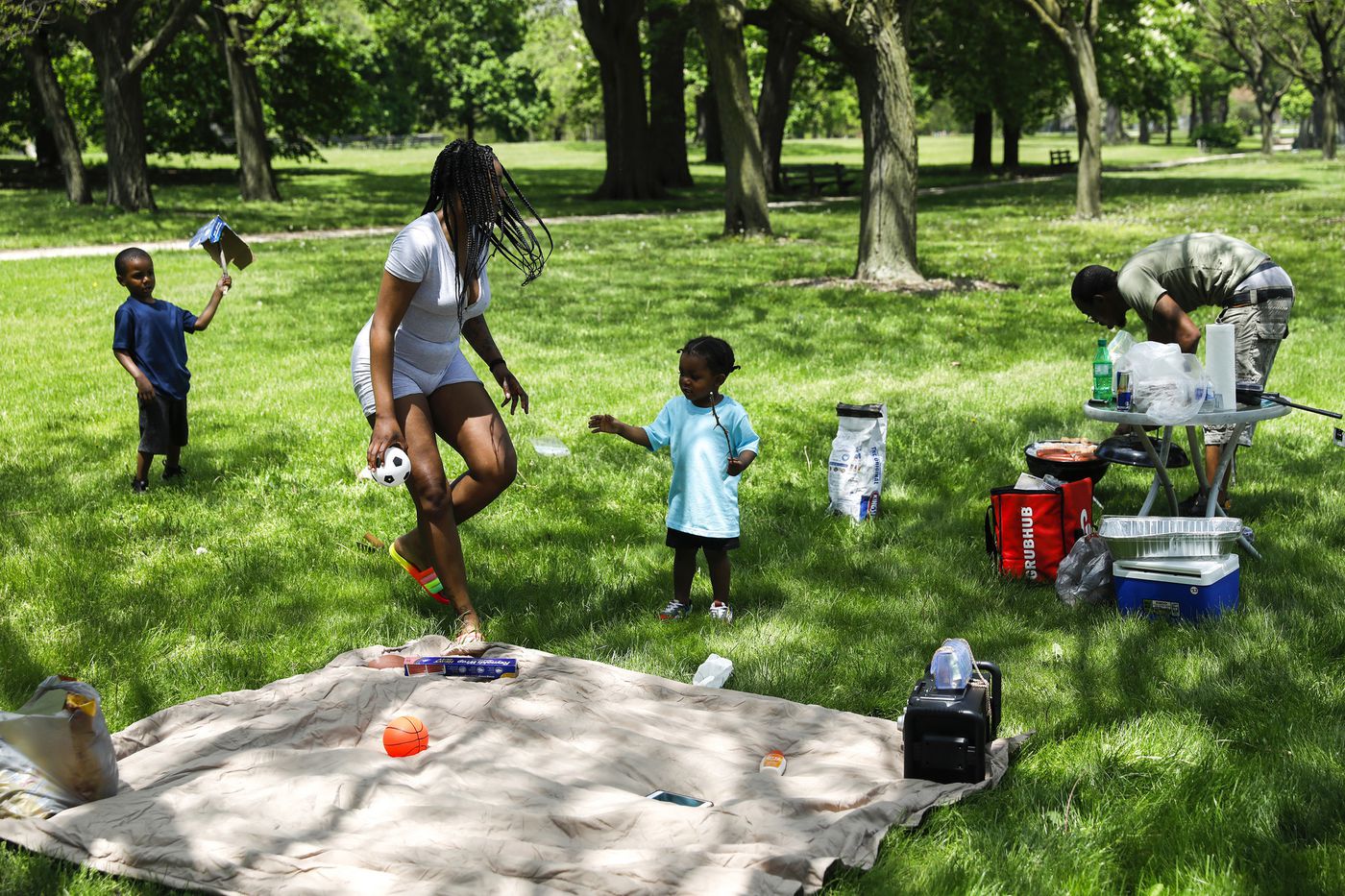 Having a family picnic in the park is a low-risk activity, according to one expert. (Jose M. Osorio / Chicago Tribune)

These precautions don’t have to end any interactions though, especially if you know how to take activities and make them lower risk, such as changing a backyard barbecue into a backyard games tournament instead — all while wearing masks.

You and your best friend going for a walk, then sitting on a bench to talk, is considered a pretty low-risk activity, Landon explained. Similarly, two parents meeting up in the park with their older children, who kick around a soccer ball in an open area, and everyone is wearing a mask, would be considered a low- to medium-risk activity.

Having dinner with your mother at her home, for example, without a mask, if you haven’t spent much time with other people, is probably a low-risk situation.

Swimming pools for fitness, not recreation, are OK, too, especially if it’s an outdoor pool. And Landon thinks it is possible to socially distance on a beach — you just have to be careful.

“If you show up at the beach and there’s not room for you to have a big space around you, then you need to go home — or get there earlier next time,” said Landon. “Bring a big blanket so people won’t get too close to you.”

Hangouts like having three to four friends over for drinks on your balcony are less ideal.

“They’re going to need to be in your house, and outside on your balcony, so you’ve got them in an enclosed space eating and drinking, and if those three or four friends also hung out earlier in the week on their balcony with three or four other friends, all of a sudden it’s starting to look like less safe activity,” said Landon.

She said a person can pick up the virus in minutes, but is less likely to contract it if outside and practicing social distancing.

When it comes to physical greetings, like hugs, Landon said to be “really careful with casual contact,” and to think about people in two categories: those you are willing to have unprotected contact with, like a family member you haven’t seen in two months, and those you are not.

If hugs or other forms of contact greetings are outside the bounds of your personal risk tolerance, communicate those boundaries.

“Once you acknowledge what level of risk tolerance you’re willing to accept for yourself and your unprotected contact — that’s the key here — then you can spend that risk in a way that makes you get the most back, the best return on that investment,” said Landon.

People who are at a higher risk of contracting COVID-19, like the elderly and those with preexisting medical conditions, should be the most cautious when it comes to being in public spaces and gathering with more people. It’s also important for the individuals who live with those who are higher-risk to follow the same restrictions in an effort to protect them, said Landon. “It’s kind of like having a newborn baby.”

Because people who may have COVID-19 can be asymptomatic, Landon urges everyone to be wary of others, even if your friends or family appear healthy.

“It’s important that even as we spend time with other people, that we try and keep our distance and wear our masks,” said Landon.

Good summer behavior will determine the next wave of the virus, Landon said. And as the state begins to transition into new phases, and we slowly start to increase the number of people we spend time with, Landon says we have to get used to wearing masks and adopting them as a personal tool that keeps everyone safe.

“We’re fighting a virus, not an ideology,” she said. “Masks are not an infringement of your freedom any more than pants are. It’s clothing that you put on your face to try to protect other people and to protect yourself.”

Coach of Orenburg Pro 0:1 with Rubin: Morally devastated, could have drawn
Kike Setien: Griezmann played a great match, understood Messi well, scored a great goal. We changed something
Barca President on the Real Madrid match: VAR always favours one team. I have an unpleasant feeling
Faty scored the 9,000 th goal in the history of Barcelona
Griezmann scored in La Liga for the first time since February with a pass from Messi
Suarez came out on the 3rd place in the list of the best Barca Goalscorers in history
Guardiola lost 3 away games in a row in the League for the first time in his career
Source https://www.chicagotribune.com/coronavirus/ct-life-safety-hangout-reopen-illinois-gatherings-tt-0528-20200528-womvcbqjlffdjarsdcaq43qa54-story.html#ed=rss_www.chicagotribune.com/arcio/rss/category/news/