Bollywood has become a divided house over nepotism debate. Many small and big names have voiced their views on the issue after the death of Sushant Singh Rajput, an actor who had the potential to become a superstar in the Hindi film industry. Now, a journalist's story from his personal experience indicates that the people, who enter Bollywood without background, are humble and usually have empathy towards others. 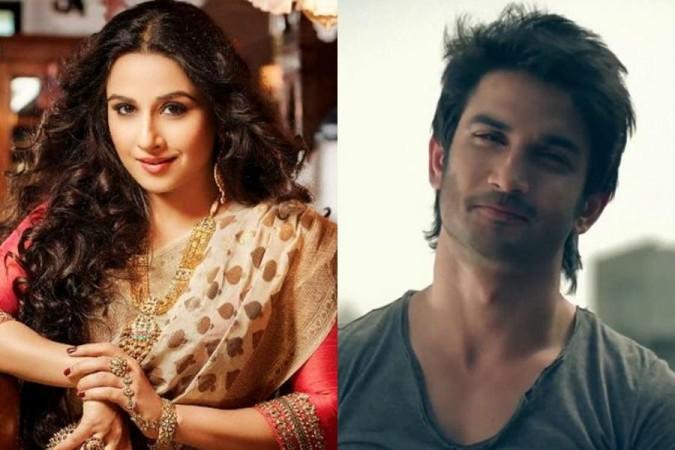 Journalist Soumya Dipta, on Twitter, has opened up on one such story where he calls insiders as "arrogant" and "outsiders" are kind and usually empathetic to help others. He has opened up about an assignment involving Vidya Balan and him.

After started working on it, a tragedy struck him in 2012 after which he failed to follow up on the project with Vidya Balan. However, the actress herself took active interest to make the project a reality even before the deadline without showing any starry airs.

He had wondered over her decision to stop her movie shoots and work on his project, but he had tears in his eyes when he realized why she did take part in the photoshoot. Her gesture helped him to overcome the "dark" phase.

The journalist claims that he had seen such humble and kind nature with Sushant Singh Rajput who died of suicide on 14 June. The Tweets can be read below:

During May 2012, I joined a media group as Bureau Chief in Mumbai. My brief was to work with a newly formed team in Kolkata which was launching a Bengali newspaper. The stakes were high and so was the work pressure.  At that time my mother was suffering from terminal stage cancer.

It was very difficult for me to run around for the treatment of my mother between two cities and rise up to the challenge of launching a newspaper in a market where the leader had already created firewalls to prevent entry of a new player. But we had a very determined, young team

Durga Puja was fast approaching and we decided to launch a special Puja edition with the perfect 'Bengali' face in Bollywood. Many editorial meetings later, Kolkata team decided to move over all Bengali actresses in Mumbai and voted overwhelmingly for a Tamil actress.
Vidya Balan

The next few days were a blur. My editors asked me not to worry about office anymore and told me that nobody from any of the offices will call me.
My colleagues in Kolkata came to see me at home.
They were being supportive but the guilt of not completing my work kept pinching me.

Two days later, my mobile received a message. It was Vidya.
She sent a short message. "How are you?"
I didn't want to tell her anything.
She told me that she learnt about a photo-shoot and she enquired about the delivery deadline.
I said I had only seven days to deliver the shoot

I asked her not to think about it as it was too short a time to deliver a photoshoot. On top of that I wasn't in Mumbai.
I sent her an apology text for not following up properly with her team and said that I understand why she won't be able to do it.
Vidya just sent a smiley back

The next day, her manager called.
Then her PR team.
Then her assistant...
Before I knew it, the ball was set in motion.
They sent me a mail saying that she will be doing the photo-shoot.
Her team mentioned a point clearly and boldly:
Vidya Balan won't be charging us a penny!

Most of us who are aware of special shoots know the work that goes behind it.
I again sent a message to Vidya again saying that I am not in Mumbai and I won't be able to arrange for the shoot. I was making sure she knows what she was agreeing to.
She sent me a smiley again.

The message exchange wasn't happening in real-time. She messaged when she was free between shots and I got back when I checked my phone, usually hours later. Yet, it never made a difference.
Her manager said that they have been instructed to conduct the photoshoot without me

How can that happen? How will they know what to shoot & the concept of the shot?
Her staff said that she will be arranging for everything on her own. Her personal staff will be roped in for the shoot.
I wanted to send her a saree from Kolkata. Vidya said she will arrange that too

Vidya Balan's creative team then got in touch to know about the concept of the shoot.
They told me to send me a photoshopped picture of the exact shot that we have in mind. Vidya will replicate that shot. We sent her team the below photoshopped image as a reference.
Sindoor Khela 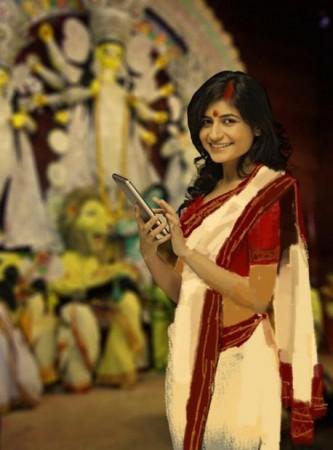 In the middle of this, I started to feel better.
Some demons had descended over me. It was like a heavy object that was constantly pressing against my chest.
Every time I looked at my mom's picture, dark thoughts would cloud my mind.
But thanks to Vidya, I started feeling better.

Two days later, around 11 am, Vidya's PR team called to inform that she is in the studio and was getting ready for the shoot. I was dumbfounded.
They told me that she had arranged everything on her own.
I asked where the food is coming from.
They said, it was from Vidya's kitchen

For the next three hours, her PR kept updating me about the progress of the shoot, even informing me about the exact time when the first shot was clicked.
By late evening, I got a text message from Vidya saying that the shoot was done and that "the photographs are very nice"

That a leading Bollywood actress would go to such lengths to get a photoshoot done, was beyond me. I couldn't fathom why Vidya Balan cancelled her film's shooting and submitted the final pictures within five days when the deadline was of seven. I didn't know how to thank her

I just sent her a brief "Thank You". I was actually at a loss of words.
Then came her final message, "My deepest condolences to you".
It was accompanied with one more text message.
I kept looking at her final text as tears rolled down my cheeks.
It was the first time I cried

Those tears helped me recoup. I realised that Vidya Balan single-handedly helped pull me out of a very dark, depressive phase. Magazine cover shoots & concept shoots with privileged actors born into prominent Bollywood families are usually a nightmare. They drive you up the wall.

Actors who come from a middle-class background aren't like the ones who are born with a movie role written for them. The nepotism products are condescending and patronising.
"Outsiders" are usually empathetic and never dither to do those little acts of kindness that help others. 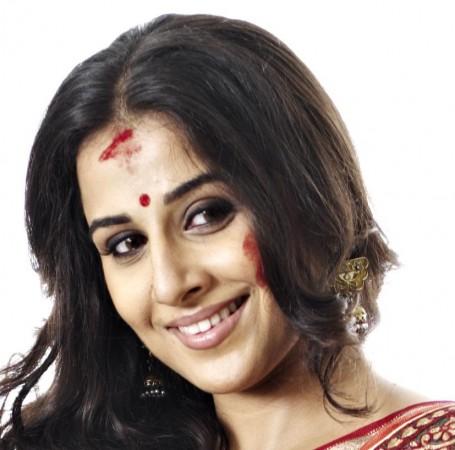 No other Bollywood actor has ever done for me what Vidya Balan did.
I don't know if I could ever come back to the profession had it not been for the kindness of Vidya.
I had thought of retiring and leaving Mumbai forever. That kind act of Vidya Balan changed my life's course

Her acts of kindness didn't just end with the shoot.
Most stars carefully select pictures that they want to share with the media. But Vidya shared all the rough shots so that I don't have to involve myself with selecting the shots. Her photographer also sent mugshots. Here's one.

After years, I had heard about another Bollywood actor who had a similar level of empathy like Vidya Balan.
He would go out of his way to help people, he would provide for his friends in need, he would donate money freely for the distressed.
He was Sushant Singh Rajput.

Bollywood is a toxic place full of bad guys.
All of you should know the backstabbing, petty politics and rejection Vidya Balan faced in her professional life. I have heard those horror stories too.
Yet she soldiered on till she achieved stardom.
Thanks for listening.

FDA: Don't use rapid COVID tests on people without symptoms

UN voting on indefinite extension of arms embargo on Iran

At Sturgis, Trump supporters look to turn bikers into voters

Need a new TV show to get into? Start with these 9 great British and Aussie imports

How to make crazy delicious spinach, artichoke and crab dip

Protecting grapes from deer and birds

Marge Simpson has something to say to the Trump campaign

How to Focus, Be Productive and Maintain Balance During a Crisis

The only 4 skincare products you need, according to this dermatologist

Military Families Have Been Voting by Mail for Decades.

22 unique and thoughtful gifts for new parents and their baby

Joe Keery and Finn Wolfhard on the Strangest Thing of All: Social Media