What is the Benadryl challenge? Why the FDA, TikTok users and toxicologists are warning against dangerous trend

UPDATE 9/25/20: The Food and Drug Administration issued a warning regarding the Benedryl challenge on Thursday, citing news reports of teens fatally overdosing and cautioning that higher doses than recommended “can lead to serious heart problems, seizures, coma, or even death.”

A new alarming trend on TikTok is prompting teens to take dangerously high amounts of Benadryl — and experts are warning the activity could be fatal. In July, Cook Children’s Medical Center in Texas wrote a blog post warning that three teens had been hospitalized in one week after ingesting large amounts Benadryl. Now, in Oklahoma, preliminary reports suggest that it may have been connected to the death of a 15-year-old (as of Wednesday, her cause of death has yet to be revealed).

In the wake of the hospitalizations in Texas, medical officials put out a statement warning against other teens putting their health in danger due to the challenge.

“One of the teens who ended up at Cook Children’s is a 14-year-old named Rebekah,” the July 14 post reads. “She took 14 Benadryl pills in the middle of the night on Memorial Day.” Cook Children’s added that the Benadryl binge was inspired by “videos on TikTok” that purportedly showed teens on high doses hallucinating. The phenomenon, which some are dubbing the “Benadryl challenge,” is the latest in a string of dangerous TikTok trends, including the nutmeg challenge and the cinnamon challenge.

But with potentially life-threatening side effects, the Benadryl trend may be the most dangerous yet. Yahoo Life spoke with a toxicologist about why it’s so dangerous — and what parents need to know.

Even safe doses of Benadryl can have ‘adverse effects’

On its website, Benadryl writes that the drug — known officially as diphenhydramine — temporarily relieves “symptoms due to hay fever or other upper respiratory allergies,” including runny nose, sneezing, watery eyes and itchy throat. The drugmaker recommends “one to two 25 mg tablets every four to six hours — and no more than 6 doses in 24 hours.”

But Dr. Kavita Babu, director of the division of medical toxicology and a professor of emergency medicine at UMass Memorial Medical Center, says that dosage is intended for adults. “Younger kids may have low dosing limits depending on their weight,” she tells Yahoo Life. Additionally, she says that “even in therapeutic dosing,” Benadryl can “have adverse effects like sedation, dry mouth, and difficulty urinating.” RxList.com warns of additional side effects, including dizziness, loss of coordination and upset stomach. 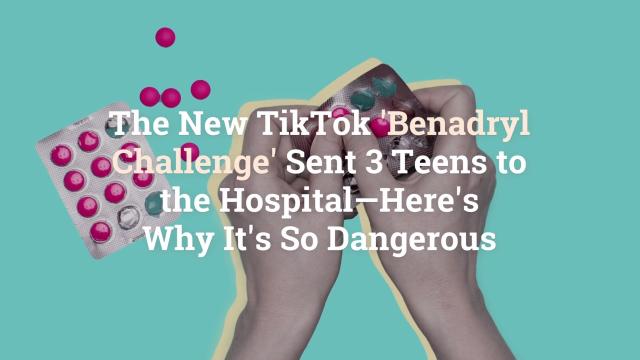 The teens reportedly took more than a dozen Benadryl tablets to get high.

An overdose of the drug can prove deadly

Babu says that early signs of a diphenhydramine overdose include “sedation, slowed/slurred speech, dilated pupils and flushing.” Mount Sinai, which also notes that diphenhydramine is the active ingredient in Advil PM, writes that a Benadryl overdose can affect the nervous system causing “delirium, hallucinations, nervousness and confusion.”

At even higher doses, such as the 14 pills taken by one Texas teen, Babu says the drug can affect the heart, leading to side effects that may turn fatal. “In high doses, diphenhydramine can produce seizure and abnormal cardiac rhythms,” says Babu. “These can both be life-threatening. We are often able to treat both of these if patients are rapidly transported to the emergency department.” She says that in the event that a teen shows a “change in mental status (like sleepiness or confusion)” parents should call 911 immediately, even if they are not sure whether Benadryl is involved.

While some of the Benadryl videos on TikTok seem to make light of the hallucinogenic-like reaction that occurs, newer videos show teens warning against trying it. “This is a PSA, please stop trying to trip on [Benadryl],” one video, captioned “I had to go to the hospital and almost died,” says. The user, identified as Levi, continues: “I took way too many Benadryl one time on purpose…Your walls are going to look like static, you’re going to feel like bugs are crawling up your skin the entire time. You’re going to sweat; you’re going to feel like death. Don’t f**king do it.”

Babu agrees. “Don't do it! In addition to running the risk of seizures and abnormal cardiac rhythms, people just feel horrible after taking that much diphenhydramine (with dizziness, cotton mouth, difficulty walking and urinating). And the effects last for hours,” she tells Yahoo Life. “In addition, the dose of diphenhydramine that is safe for friend might make your very sick or even kill you. Teenagers are at a point in their lives where underlying issues with seizures or cardiac problems may not have been unmasked yet. You may have a special vulnerability to diphenhydramine's effects at high doses. It's not worth the risk.”

Arsenal will exclude Ozil and Sokratis from the Premier League bid
Bartomeu will miss the match against Ferencvaros due to a relative's covid. Barca President wants to get to the game with Real Madrid
Liverpool and Manchester United are among the clubs in talks to create a European Premier League
Thibaut Courtois: real want to win the Champions League and La Liga
Tiago and Matip didn't train with Liverpool today. They will probably not play Ajax
Griezmann will not return to Atletico from Barcelona
Miranchuk was included in Atalanta's bid for the Champions League match with Midtjylland
Source https://www.aol.com/article/lifestyle/2020/09/25/what-is-the-benadryl-challenge-why-the-fda-tiktok-users-and-toxicologists-are-warning-against-dangerous-trend/24630517/

The world's longest flight is back -- and now it's even longer

The world's longest flight is back -- and it'll be longer

This car just smashed through speed records at 316 mph

Jennifer Garner Still Having A Baby With Ex-Boyfriend Jon Miller?

Jeffrey Toobin suspended from New Yorker, on leave from CNN, after he said he accidentally exposed himself on Zoom call

If Democrats Can, Should They Pack US Supreme Court?

US home construction up 1.9% in September to 1.4 million

Department of Justice to sue Google for antitrust violation