Narendra Modi had urged people to switch off the lights at their homes and light up earthen lamps, candles or mobile phone torches for nine minutes at 9 pm on April 5 to display the country's "collective resolve" to defeat the coronavirus.

Millions of Indians on Sunday observed a nine-minute blackout called by Prime Minister Narendra Modi and lit candles and diyas (earthen lamps) to "challenge the darkness spread by coronavirus pandemic". At 9 pm for 9 minutes, people across India switched off their lights and lit earthen lamps and candles as part of the exercise. 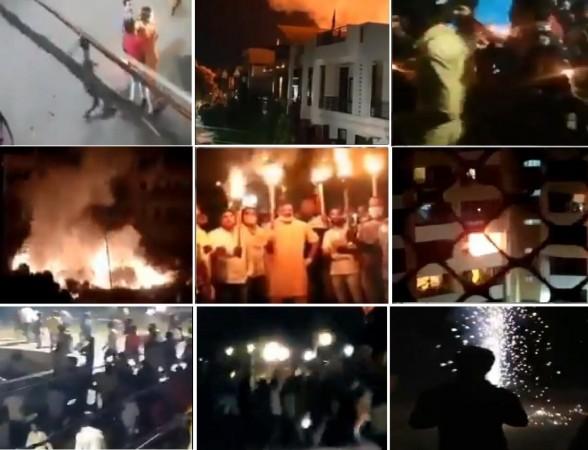 However, there were many who misunderstood the exercise and defeated the purpose of the prime minister's 9 pm 9 minutes blackout by bursting fire-crackers and taking out Diya and candle marches. Narendra Modi had urged people to switch off the lights at their homes and light up earthen lamps, candles or mobile phone torches for nine minutes at 9 pm on April 5 to display the country's "collective resolve" to defeat the coronavirus.

1. A building caught fire in Jaipur due to mindless firecracker bursting. The tweet says Delhi, but it actually happened in Rajasthan's Jaipur.

2. Across the country, people decided to take out their 'Diya March' and completely ignore the Social Distancing.

3. Some miscreants set fire at Ramakrisnanagar in Patna, Bihar. Overworked firemen who go around and sanitize roads for will now have to put their lives at risk and deal with this.

4. BJP MLA and his supporters take out candle march against COVID-19.

5. An apartment caught on fire at Oshiwara, Mumbai.= reportedly due to firecrackers.

6. Corona ki baraat? In Yogi Adityanath's Uttar Pradesh, a group of people took out their own march on Sunday.

7. A group of people dancing with mobile phone torches. Social distancing goes for a toss.

8. People took the blackout as their license to burst firecrackers. They call it "the power of Modi".

9. A person decided to show some stunt. He caught fire while breathing fire.

The homes of Benfica players were threatened after the attack on the club bus
Have you seen the Loco gun? The ball comes out of it with the same sound as when you hit it, but there is no impact! How so?
Chelsea have agreed to transfer Werner for 60 million euros
Ronaldo dressed up as Aladdin, Georgina as a Power Ranger for the children's birthday
During a 6-hour shift, you can't drink, eat, or go to the toilet. Two monologues from the RPL about doctors who are fighting the virus
APL presented a calendar until July 2. Manchester City and Liverpool will play on this day
Wesley Sneijder: I Could have been like Messi or Ronaldo, but I didn't want to. I enjoyed life, they sacrificed a lot
Source https://www.ibtimes.co.in/watch-nine-times-people-defeated-purpose-pm-modis-9-pm-9-minutes-show-816853