The 2016 emails, provided to The Guardian, were sent from Patrick Caughran, identified as the founder of Team Rugged, a group that reportedly trains teen boys and men in their early 20s for religious combat in the state.

Before his election last year, Washington state Sen. Matt Shea denied that a document called "Biblical Basis for War," that he distributed to supporters, was advocating for a holy war between Christian “patriots” and Muslim “terrorists,” according to The Spokesman-Review of Spokane. 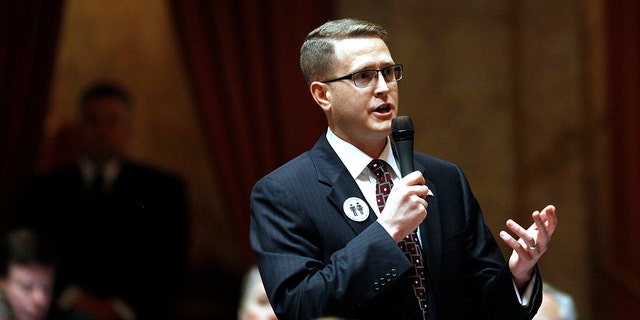 Shea, who represents Spokane Valley, claimed the document, which described how a "Holy Army" should kill those that disobey “biblical law,” had notes for a scholarly sermon about the Old Testament.

Team Rugged’s website describes itself as “a Christian organization that strongly believes in building manly character and the capability to stand in adversity in young men,” according to The Guardian.

An email from Caughran to Shea, however, stated the group’s entire purpose was to “provide patriotic and biblical training on war for young men, according to The Spokesman-Review.

“Everything about it is both politically incorrect and what would be considered shocking truth to most modern Christians,” he wrote. “There will be scenarios where every participant will have to fight against one of the most barbaric enemies that are invading our country, Muslims terrorists.”

“There will be biblical teaching ... on biblical warfare, the responsibilities, regulations, principles and mindset," Caughran wrote about the training, according to The Guardian, "so that our young men will be better prepared to fight against physical enemies, and to do so, God’s way and with His blessing," The Guardian reported.

Shea has been open about his ties to the group before. In 2017, he posted a Facebook video showing him interviewing members of Team Rugged at the annual God and Country Celebration in Marble, Wash., Seattle's Q13 FOX reported.

The Washington state House of Representatives has hired a private investigator to figure out if Shea was promoting political violence, The Spokesman-Review reported.

Europe Races to Ready Hospitals for Coronavirus Break Out

Home of the Week: Celebrating a Craftsman classic in Angelino Heights

How to watch the South Carolina primary

All U.S. troops to withdraw from Afghanistan under peace deal

Turkey opens gates into Europe as migrants gather on border