Players for the Atlanta Dream and other teams across the W.N.B.A. have begun a public show of defiance by wearing T-shirts endorsing the Democratic opponent of the Dream’s co-owner Senator Kelly Loeffler, Republican of Georgia, who is in a tightly contested race for her seat and has spoken disparagingly of the Black Lives Matter movement.

Images of players, including the nine-time All-Star Diana Taurasi, wearing the shirts endorsing Dr. Raphael G. Warnock flooded social media on Tuesday ahead of a nationally televised matchup between Atlanta and the Phoenix Mercury.

Across the chest of the black T-shirts were two words “Vote Warnock,” a reference to the Atlanta pastor who is one of the top Democrats running against Loeffler in a special election in November.

It was the latest escalation in a conflict that has roiled the W.N.B.A. in recent weeks. Loeffler, who owns 49 percent of the team, has publicly and frequently derided the league for dedicating its season to the Black Lives Matter movement, provoking sharp criticism from some of the league’s most high-profile figures. The players’ union has called for her ouster, but W.N.B.A. Commissioner Cathy Engelbert told CNN in mid-July that Loeffler would not be forced to sell the team. 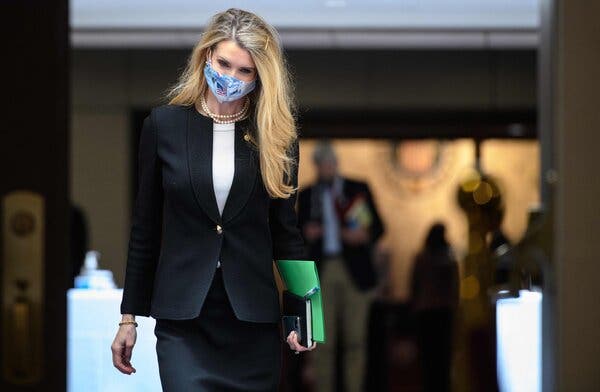 Senator Kelly Loeffler, Republican of Georgia, has criticized the W.N.B.A. for its commitment to social justice this season and disparaged the Black Lives Matter movement.Credit...Mandel Ngan/Agence France-Presse — Getty Images

Neither the Loeffler nor the Warnock campaigns immediately returned requests for comment.

Elizabeth Williams, who has played for the Dream since 2016, said in an interview on Monday that the players plan to “vocally support” Warnock in the coming weeks, and that players have had “several” conversations with him.

“When we realized what our owner was doing and how she was kind of using us and the Black Lives Matter movement for her political gain, we felt like we didn’t want to feel kind of lost as the pawns in this,” Williams said.

Williams said the idea to publicly endorse Warnock came from Sue Bird, the 11-time All-Star guard for the Seattle Storm. Both Williams and Bird are executives in the players’ union. The union also consulted with Stacey Abrams, the Democrat who lost a close race for the Georgia governor’s seat in 2018 to Brian Kemp, a Republican. Abrams joined the players’ union board of advocates last summer.

In planning the demonstration, the players thought it was important that the T-shirts debuted during a game that was nationally televised. Tuesday’s game between the Dream and Mercury was scheduled to be broadcast on ESPN 2. Williams said that the Dream players will continue to wear the T-shirts in upcoming games, and other teams have agreed to do so, too.

“We can’t really do anything about her ownership,” Williams said, referring to Loeffler. “That’s not something we can control. We can control who we vote for.”

The teams’ coaches were made aware of the demonstration, Williams said, but she was unsure whether Mary Brock, the philanthropist who owns the other 51 percent of the Dream, was told ahead of time. Brock thus far has not publicly addressed the conflict between Loeffler and the W.N.B.A. players.

This level of public protest — players on a team openly campaigning against their own owner — is virtually unheard of in professional sports. But it is not out of character for players in the W.N.B.A., a league that has frequently shown a willingness to tackle social justice issues publicly. In 2016, W.N.B.A. players were among the first professional athletes in the United States to demonstrate against police brutality, also with T-shirts. The W.N.B.A. initially fined those players before rescinding the fines.

Recently, the league has waded deeper into politics, in large part because of its players’ willingness to do the same. In 2018, the W.N.B.A. partnered with Planned Parenthood for an initiative called “Take a Seat, Take a Stand,” which sent a portion of ticket proceeds to multiple groups including Planned Parenthood. Since then, W.N.B.A. players have often been spotted at the front lines of demonstrations, especially recently after the deaths of George Floyd and Breonna Taylor, who were killed by the police.

The initial response to Loeffler, who is not involved in the day-to-day operations of the team, came after she wrote a letter in early July to Engelbert, saying, “I adamantly oppose the Black Lives Matter political movement, which has advocated for the defunding of police.” Loeffler also accused the movement of promoting “violence and destruction across the country.”

One of the most high-profile rebukes came from Dream players, who issued a collective statement on July 10: “It is not extreme to demand change after centuries of inequality. This is not a political statement. This is a statement of humanity.”

Loeffler has since made a cause celebre of criticizing the W.N.B.A.’s commitment to social justice, frequently conducting interviews painting herself as a victim of so-called “cancel culture” as a result of the backlash from players.

In her Senate race, Loeffler is fighting to remain in the seat she was appointed to late last year after Johnny Isakson stepped down because of health problems. To win, a candidate must get 50 percent of the vote. If no candidate reaches that mark, the top two candidates will have a runoff, which is widely expected to be the outcome. The other top candidate in the race is Representative Doug Collins, a Republican and ardent supporter of President Trump.

Collins and the W.N.B.A. players have one thing in common: They want Loeffler to sell her stake in the team. But Collins’s reasoning was different. On July 7, he issued a statement that said Loeffler should “get out of the liberal agenda advocacy business,” in reference to the Dream.

Asked if she was bothered that the W.N.B.A. was not forcing Loeffler to sell her stake, Williams said: “Honestly, I think that she wants the league to push her out. She wants that to be part of this statement that she’s making that, ‘Oh, Black Lives Matter is divisive. They pushed me out because they feel differently, blah blah blah.’

“So I think, ironically, playing this kind of wait and see game is more frustrating for Kelly than it is for us,” Williams said.

Barcelona's Interest in Isak Increased after Koeman's appointment. Larsson has a high opinion of the player (Mundo Seportivo)
Manuel Pellegrini: When you play against Real Madrid and var, it's too much
PSV and Porto are Interested in Barcelona midfielder PUC. He doesn't want to leave the club
Puyol about Barcelona: If we want to win the championship, we need to perform very well
Schalke sacked Wagner. The team has not won the Bundesliga since January
Iacini on 3:4 with Inter: Even a draw would be an unfair result, given how many chances Fiorentina created
Ramos Pro 3:2 with Betis: the Referee tried his best and didn't do anything intentionally
Source https://www.nytimes.com/2020/08/04/sports/basketball/wnba-dream-loeffler-warnock.html