Northam, a Democrat, plans to have the statute moved off its massive pedestal and placed in storage while his administration seeks input on a new location, The Associated Press reported.

The move by Northam comes amid turmoil across the nation and around the world over the death of George Floyd, who died in police custody on May 25 after a Minneapolis officer pressed his knee into Floyd’s neck for several minutes in moments captured on cellphone footage.

Floyd’s death has sparked protests and outrage over issues of racism and police brutality and prompted renewed calls for the removal of Confederate memorials across the country.

The statue in Richmond -- the former capital of the Confederacy -- has become a frequent target of vandalism during the protests, with demonstrators chanting “tear it down” on Tuesday. The Lee monument was erected in 1890, decades after the end of the Civil War.

The Lee statue is one of five Confederate monuments along Monument Avenue in Richmond. It has been the target of vandalism during protests in recent days over Floyd's death. The base of it was covered this week with graffiti, including messages that say "end police brutality” and “stop white supremacy.”

It was not immediately clear when the statue would be removed. 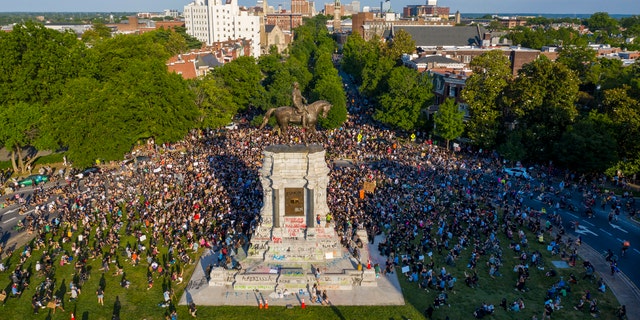 Also on Wednesday, Richmond Mayor Levar Stoney announced plans to remove the other Confederate monuments along Monument Avenue, which include statues of Confederate President Jefferson Davis and Confederate Gens. Stonewall Jackson and J.E.B. Stuart. Those statues sit on city land, unlike the Lee statue, which is on state property.

Stoney said he would introduce an ordinance July 1 to have the statues removed. That’s when a new law goes into effect, which was signed earlier this year by Northam, that undoes an existing state law protecting Confederate monuments and instead lets local governments decide their fate.

Earlier this week, work crews in Alexandria, Va., took down a bronze statue of a Confederate soldier named "Appomattox" after years of calls for its removal, while in Birmingham, Ala., authorities began pulling down a five-story-tall obelisk to Confederate troops that has stood for more than a century.

The obelisk has also been vandalized by protestors and another monument to the Confederacy -- a statue of former Confederate officer Charles Linn -- was toppled during the protests over the weekend.

The death of Floyd has sparked nationwide furor over police brutality and racial injustice, and has also sparked a renewed demand for the removal of statues and monuments to the Confederacy.

That movement to remove them first entered the national consciousness following the violent clash between white supremacists and counter-protestors over the planned removal of a different Robert E. Lee statue in Charlottesville, Va., in 2017, but cities and states have long been struggling about what to do with the monuments.

Following the 2015 massacre on nine people in Charleston, S.C., by white supremacist Dylan Roof, Maryland’s Montgomery County executive decided to remove a Confederate monument in the Washington, D.C., suburb of Rockville. The 13-ton statue of the Confederate soldier, which had stood in the town since 1913, was transferred to White's Ferry, a privately run Potomac River ferry named after a Confederate general.

Atalanta captain Gomez is the first Serie A player in the twenty-first century to give 15 assists in a season
Manchester City arranged a championship corridor for Liverpool
Mohamed Salah: I hope to stay in Liverpool for a long time
La Liga President: Many try to justify failures on the field by talking about rest and schedule
Rivaldo on Griezmann: I Don't understand why the world champion and multi-million dollar transfer only comes out at the last minute
The Doctor Sociedad: The Youngster from serious injury. We are not currently considering the option of surgery
Klopp made Liverpool Champions. Now it's your turn: the game Showsport
Source https://www.foxnews.com/politics/virginia-gov-northam-to-order-removal-robert-e-lee-statue-richmond

Native tribal leaders are calling for the removal of Mount Rushmore

Mount Rushmore hasn't had fireworks for more than a decade because it's very dangerous. Here's why

Stream It Or Skip It: ‘The F**k It List’ on Netflix, a Tone Deaf Blend of Teen Comedy and Coming-of-Age Drama

Child care is essential to reopening the economy

Trump's approach to the presidency: Ignore the challenges and embrace the easy

Over 80 killed in Ethiopia unrest after singer shot dead

$1 billion shortfall, furloughs could bring US immigration system to a halt

Column: Fans may not like what they see on return to stands

US, Russia share a complex and bloody history in Afghanistan

Fact-checking a mask meme shared by Trump Jr. on Facebook

Trump Admin. To Roll Back Transgender Protections In Homeless Shelters

Ri-Karlo Handy, Editors Guild & The Urban League Team Up With Mentorship Program For Creators Of Color