Embattled Venezuelan President Nicolas Maduro took aim at the United States during his UN General Assembly address on Wednesday, accusing Washington of "criminal, inhuman aggression" toward his regime in a long, winding pre-recorded speech from Caracas.

"The world must know that we are prepared to fight with the force of our history, our spirit, reason and international law," Maduro proclaimed with regards to repeated U.S. attempts to pressure him to step down and the bevy of subsequent sanctions imposed, which he called an "illegal blockade."

Maduro also degenerated the U.S. – which along with more than 50 other countries, does not recognize him as the legitimate Venezuelan leader and instead acknowledges opposition leader Juan Guiado as interim president – as "the most serious threat to peace in this world."

Guaido also purported to carry his message to the international community, releasing a pre-taped response to Maduro's return to the global stage by challenging UN member countries to "do what's right, stop human rights violations that in this instant continue, to collaborate to put an end to the terror that the egregious (Maduro) dictatorship intends to impose." 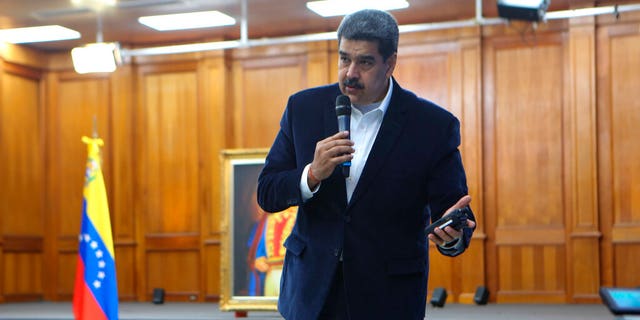 This photo released by the Venezuelan Miraflores presidential press office shows President Nicolas Maduro speaking over military equipment that he says was seized during an incursion into Venezuela, during his televised address from Miraflores in Caracas, Venezuela, Monday, May 4, 2020. Maduro said authorities arrested two U.S. citizens among a group of “mercenaries” on Monday, a day after a beach raid purportedly aimed at capturing the leader that Venezuelan authorities say they foiled. (Miraflores press office via AP)

Maduro himself made no mention of the explosive UN Human Rights Council-commissioned report unveiled earlier this month, detailing the extensive and systematic human rights abuses orchestrated from Maduro's inner-circle which amount to crimes against humanity.

According to the findings, his government and security forces have engaged in an assortment of brutal torture tactics ranging from electric shocks, genital mutilation, and asphyxiation to kill and maim dissidents.

A three-member panel appointed by the Council claimed in the 411-page document that it "had reasonable grounds to believe" that Maduro, the interior minister, the defense minister, and the directors of Venezuela's security and intelligence services "ordered or contributed to" the arbitrary detention, enforced disappearances, and torture of critics and extrajudicial killings. 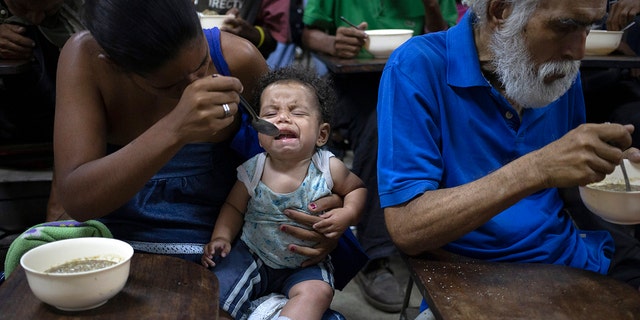 Zoraida Silva, 26, feeds her six month baby Jhon Angel, at a soup kitchen in The Cemetery slum, in Caracas, Venezuela. Silva said that she can not afford to have 3 meals a day, and she has been eating at the soup kitchen for two years ago. According to a survey recently published by the U.N. World Food Program, one of every three Venezuelans cope with food insecurity, unable to get enough food to meet their basic dietary needs. (AP Photo/Ariana Cubillos)

Moreover, the panel said Maduro and his top brass did not prevent abuses, although they had the authority and ability to do so.

Investigators have strongly recommended that their involvement in these alleged abuses be further investigated, and determinations made as it pertains to their individual and criminal responsibility.

The Venezuelan government has not officially responded to the report; however, the foreign minister, Jorge Arreaza, alleged on Twitter that it was "plagued by falsehoods" and "controlled by governments subordinated to Washington."

And despite Maduro's vast unpopularity and the impassioned protests for his removal that have permeated the Venezuelan streets for more than six years, Maduro has retained a firm grip on Caracas – even as the country has fallen into dizzying economic and humanitarian decline, made all the more devastating amid the coronavirus pandemic.

Earlier this year, the U.S. Department of Justice took the pressure campaign a step further by indicting Maduro on charges of narco-terrorism – and placing a $15 million bounty on his head.

Ronaldo will not play Barcelona (Romeo Agresti)
Ole Gunnar Solskjaer: Leipzig impressive progresses. He is aiming for trophies
VAR cancelled out a penalty against Lokomotiv due to an offside move by levandowski
Julian Nagelsmann: Leipzig are confident enough to talk about winning the game against Manchester United
Ronald Koeman: I hope Cristiano will play. The best players should be on the pitch
The 25% black and Asian rate for new club employees is set out in the FA diversity Code
Muller is playing his 545th game for Bayern. More than only two players since 1965
Source https://www.foxnews.com/world/maduro-denounces-the-u-s-as-the-most-serious-threat-to-world-peace-in-un-address

Obama Slams Trump: ‘Even Florida Man Wouldn’t Be Doing Some of This Stuff’

13 Best Stocks to Buy If Joe Biden Wins the Presidency

Uzo Aduba to Star in ‘In Treatment’ Reboot at HBO

Marlon James talks about the roots of Black fiction

Pope Francis Advisors Pushing Him To Wear Mask: 'We're Working On It'

Collins votes against Barrett, heads home to save Senate job

Florida added to Chicago’s travel quarantine list this week, Michigan could be next. Here’s what you need to know to avoid a large fine.

Vote early, but don't put that ballot in the mail

Boston mayor urges residents to get tested after coronavirus spike

Democrats Are Poised to Expand House Majority in GOP Turf

Barack Obama slams Jared Kushner’s comments on Black success: ‘Who are these people?’

Over 4,400 pounds of Trader Joe's fish have been recalled

The family of a Latino former Obama official suspected he died of Covid-19. They were right.

Panthers’ McCaffrey back at practice after missing 5 games

All of Harry Styles’ tattoos and their meanings