(Want to get this briefing by email? Here’s the sign-up.) 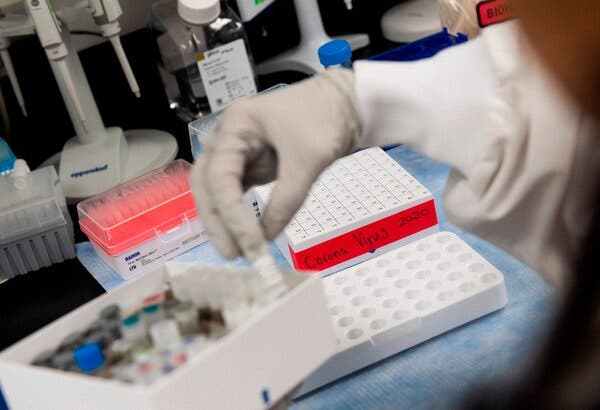 1. Novavax, a closely watched vaccine maker that got $1.6 billion from the federal government, announced encouraging results in two preliminary studies.

In one study, 56 volunteers produced a high level of antibodies against the virus without any dangerous side effects. In the other, researchers found that the vaccine strongly protected monkeys from coronavirus infections. Above, the Novavax lab in Gaithersburg, Md.

Other vaccines are further along with clinical trials, but Novavax’s stands out because it is protein-based — the same proven technology used for existing vaccines against diseases like chickenpox — which could make it safer and easier to manufacture in large amounts.

Carl Zimmer, one of our science writers, thinks a number of coronavirus vaccines will turn out to be safe and effective. “I think that there will be a patchwork,” he told us.

Still, Republican senators who have largely sat out the talks sounded downbeat about striking a deal before they are scheduled to begin a monthlong recess on Friday.

3. At least 70 people died and 3,700 were injured after huge explosions rocked Beirut.

With the wounded still streaming into hospitals and the search for missing people underway, the figures were likely to go higher. Videos posted online showed people bleeding amid the debris. At least one hospital was overwhelmed and turned the injured away.

“Highly explosive materials,” seized by the government years ago, were stored where the explosions occurred, the head of Lebanon’s general security service said. He warned against getting “ahead of the investigation” and speculating about a terrorist act.

At least two people were killed after a tornado spawned by the tropical storm touched down in Bertie County, N.C. At least 12 people were hospitalized, and three were unaccounted for. In New York, a person was killed after a tree fell on a vehicle in Queens.

Tornadoes also landed in parts of southeastern Virginia and southern New Jersey, while another likely touched down in Delaware. Tropical storm conditions and a risk for tornadoes are expected to reach New England tonight, the National Hurricane Center said. Above, a damaged house in Suffolk, Va.

More than three million people along the Eastern Seaboard lost power as Isaias swept through. But officials said that the storm’s rapid pace, moving nearly 35 miles per hour, helped limit river flooding in some places and allowed the authorities to mobilize swiftly.

(Did you know that when the first Europeans arrived in the Americas, they had no word for “hurricane”? With exquisite timing, a book published today, “A Furious Sky” by Eric Jay Dolan, tells the 500-year history of America’s hurricanes.)

5. In the East, a hurricane. In the West, a wildfire. They’re related.

Some experts say that the pair of hazards bracketing the country this week offers a preview of life under climate change: relentless overlapping disasters, major or minor. Above, fighting the Apple Fire in Cherry Valley, Calif., over the weekend.

For hurricanes, warmer oceans provide more energy, making storms stronger. And warmer air holds more moisture, so the storms bring more rain. For wildfires, a warming climate and shifting precipitation patterns have lengthened the fire season and contributed to an increase in larger fires that can grow more rapidly.

“What makes climate change so insidious is that it alters hazards, like flooding, just enough to turn what otherwise could have been just an emergency into a disaster, and disasters into catastrophes,” an emergency management expert said.

6. The Census Bureau reversed course: Instead of seeking more time, it will wrap up four weeks early with 60 million U.S. households still uncounted.

The bureau has offered no explanation for the change. It had said only months ago that the pandemic had made additional time necessary. Above, the Census Bureau director, Steven Dillingham, appearing before a House committee last week.

Census experts have said that shortening the count would wreak havoc with efforts to reach the hardest-to-count households — immigrants, minorities, young people and others — and called it a bald move to politicize the count in favor of Republicans. Last month, President Trump demanded that the census exclude undocumented immigrants from the population totals used to allocate House seats.

The oil giant also cut its dividend in half as lower oil prices and plunging demand from the effects of the pandemic took a toll.

But BP won over investors by speeding up its reinvention as a lower carbon company. Shares rose more than 7 percent after BP said it would increase investments in sources like solar and wind power by tenfold within a decade, while cutting oil and gas production by 40 percent.

8. Interest rates are low, but consumer loans are harder to get.

There has hardly been a better time to borrow, with rates driven to rock-bottom levels by the pandemic.

But the crisis also means it is harder for lenders to get an accurate read on consumers’ financial health. Credit issuers have tightened their standards, often requiring higher credit scores, heftier down payments and more documentation.

That hasn’t stopped the creditworthy from borrowing. Even with more stringent criteria, the mortgage industry made $865 billion in loans during the second quarter, the highest amount since 2003. Above, Anil Lilly toured his new home last month in Washingtonville, N.Y.

Only if you’re sweating. For our Science section, the cartoonist-engineer Randall Munroe asked experts about the hottest temperature a normal human could tolerate.

Their answer is that it’s limited by sweat — how quickly we can produce it and how quickly it evaporates.

One study found that a person who is at rest, wearing minimal clothing in a very dry room and drinking water constantly, could probably avoid overheating in temperatures as high as 115 degrees Fahrenheit.

See, it’s really not the heat — it’s the humidity.

Credit...Jeremy and Claire Weiss for The New York Times

10. And finally, the hoarders started with freeze-dried food. Now they want tents and kayaks.

Early in the pandemic, consumers bought up survival gear: ready-to-eat chili, water filters and backup power. Then they turned to indoor activities, like grooming supplies and video games. Spring brought a rush on bikes, pools and trampolines; bait and tackle spiked in April.

Now, it’s a mad dash for camping gear. Any of it. Above, backyard camping in Maplewood, N.J.

For much of the outdoor recreation industry, this is generally good news: lots of people buying lots of things. But with it have come shortages, back orders and long waits. And nobody is quite sure what’s going to happen when winter arrives.

Have a rustic evening.

Mane scored twice for Chelsea at Stamford bridge. Only Coutinho and McManaman were able to do this
Tiago made his debut for Liverpool, replacing Henderson in the match against Chelsea
The referee after VAR removed Christensen for a foul on the main. This is the first red Chelsea in the Premier League since 2018
Barca defender of Modibo Interesting Everton, and Wolverhampton, Leicester and Benfica
Semedu for 40 million euros will move from Barca to Wolverhampton (ESPN)
Showsport: Tiago will make Liverpool more variable and thinner. Bayern will feel the loss, but only in the top matches
Jose did not include Dele alli even in the application (it seems, because of the conflict), but so far remained the winner-Son scored 4 from Kane's assists
Source https://www.nytimes.com/2020/08/04/briefing/vaccine-stimulus-beirut.html