A Utah police officer died after a fatal shooting and another was injured while responding to a domestic violence call Thursday, authorities said.

The shooting occurred around 12:15 p.m. in the 300 block of Jackson Avenue in Ogden, located 40 miles north of Salt Lake City, when officers responded to a call from a woman who said her husband had threatened to kill her.

Ogden Police Chief Randy Watt said the suspect confronted the officers and was uncooperative before retreating into the home. When the officers followed, they were fired upon through the door, he said. 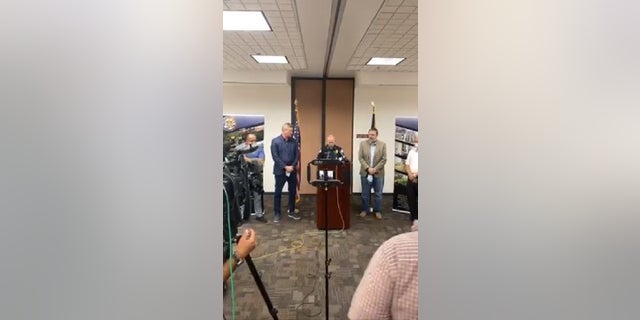 Ogden, Utah Police Chief Randy Watt holds a news conference to announce the death of one of his officers during a domestic violence response call Thursday. (Ogden Police Department / Facebook)

The officer who was killed was dragged from the scene and taken to a hospital, where he was pronounced dead.

“A fine young officer with just 15 months on the job was killed,” Watt said during a news conference.

An adult probation and parole officer was also struck by gunfire and taken to a hospital with a non-life-threatening wound, Watt said. The gunman was also killed by officers, he said.

Children inside the home were removed and found unharmed. The gunman was found dead inside.

The shooting triggered a lockdown of the neighborhood in the northeast part of the city. Watt declined to name the deceased officer or the suspect.

“Our hearts are broken. We have lost one of our own," Watts said, holding back tears. "The days to come will be hectic for us."

"There is no greater love than to lay down one’s life for one’s friends. The worst days in this profession are those where we lose our brothers and sisters in the line of duty. Information is still being gathered. Take a moment to think on and honor the fallen officer, their family, their colleagues and their communities," a Facebook post from the Utah Fraternal Order of Police said.

Kike Of Setian: Of course, we can win the championship. This is evidenced by facts and mathematics
Bartomeu on Messi: We have to renew the contract. Leo told me that he wants to finish his career at Barca
Chelsea are willing to pay Havertz 8 million euros a year and will soon start negotiations with Bayer
Showsport - about the crisis in Barcelona: Bartomeu set up Setien, star senators impose tactics on coaches
Barca President: VAR is being used unfairly. After the restart, there are solutions that help some and harm others
Real want to sign Mbappe for free in 2022. Subscription bonus – 100 million euros
Pep is a great coach, but not a very good driver. For 4 years in Manchester, damaged 4 cars worth more than half a million euros
Source https://www.foxnews.com/us/utah-police-officer-killed-shootout-domestic-violence-call-officials

Justin Timberlake, a Tennessee native, says Confederate statues 'must be taken down'

New Mexico Leaders To Militia: If You Want To Help Community, Stop Showing Up Armed

Leading Iraqi expert on ISIS, other militant groups shot outside his home

Brit Hume: Why biased coverage of Trump's Mount Rushmore speech 'could be a turning point'

9 of the US's wildest, weirdest and most spectacular outdoor art experiences

‘It Will Consume Your Life’: 4 Families Take On Rare Diseases

Anubhav Sinha on discussions after Sushant's death: I suspect there is some politics that has gotten into it

Women, young people and low earners are getting hurt most by jobs crisis

Column: No, a chiropractor can't cure COVID-19 (or diabetes, for that matter)

The Best Places to Enjoy Nature in NYC During COVID-19

California braces for a spike in coronavirus deaths as infections soar. But how bad will it be?

Sen. Tim Scott on race, police reform, and why ending qualified immunity is a nonstarter for the GOP

Army veteran Sen. Tammy Duckworth hits back at Tucker Carlson for claiming she hates America: 'Walk a mile in my legs'

Novavax gets $1.6 billion from government to develop coronavirus vaccine

Aerial ballet: How airplanes fill up with fuel mid-air

Harry and Meghan call for Britain to confront colonial past

Scaramucci: Trump is ‘doubling and tripling down on full-on racism’

North Korea rejects talks as US envoy arrives in Seoul

Chicago pastor reacts to weekend violence, death of 7-year-old: 'We have to take back our cities'

GOP Sen. Chuck Grassley Bails On RNC 'Because Of The Virus Situation'

#BlackoutDay2020 is today. Here's what you need to know

Is Kanye West running for president? Probably not.

House Democrats include removal of Confederate statues in funding bill

The Bull Run Is Over: It’s Time To Replace Luck with a Plan

What you need to know about coronavirus on Tuesday, July 7

Film Festivals In The Pandemic Era: Here’s The Latest Update From 16 Key Events

12 Productivity and Time-Management Books to Read this Summer

"MLS is Back Tournament" rolls on despite coronavirus concerns

Masks are effective only if you wear them properly. Here's the right (and wrong) way

Sierra peak on the verge of losing its Confederate name

Daywatch: How Illinois compares as COVID-19 cases spike in US, charges filed in July 4 killing of 7-year-old and thousands of Chicago businesses got PPP loans of at least $1 million

The ugly truth about millions of American jobs: They are not coming back