Unusually powerful storms with winds exceeding 100 miles per hour ripped through parts of the Midwest on Monday, knocking out power for about one million customers, downing countless trees and utility poles and flipping cars as they crossed several states within several hours, officials said.

“Everybody in town is without power except those with a generator,” said Mayor Joel Greer of Marshalltown, Iowa, which is about 50 miles northeast of Des Moines. Mr. Greer declared a state of emergency for his city, which is still recovering from a tornado that struck in 2018.

“It hit us at a time when we were just getting back on our feet,” Mr. Greer said.

About one million customers were without power across the Midwest, according to outage maps from energy companies. 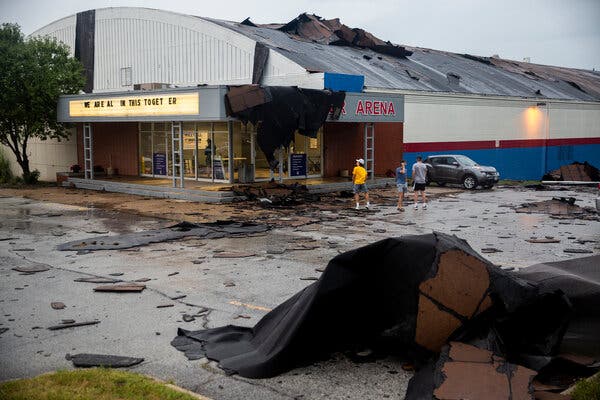 The storms hit parts of Iowa and eastern Nebraska on Monday morning before they surged through northern Illinois and began heading across Lake Michigan and northern Indiana later in the day, the National Oceanic and Atmospheric Administration said in a statement.

The extensive damage was caused by the derecho, which is a line of severe thunderstorms that produce high winds. “In fact, derecho comes from the Spanish word for straight,” said Patrick Marsh, a science support chief at the National Weather Service.

Derechos are formed when warm, humid air rises into the atmosphere and mixes with cooler, denser air before returning to the surface, he said. Then the cold, dense air hits the ground, spreads out, he said. storms have wind speeds that can exceed 100 miles per hour — much like a weak hurricane.

Tornados can be “a possible byproduct” of derechos, according to Eric Lenning, a meteorologist at the National Weather Service in Chicago. Tornados move in a circular direction and affect a smaller geographical region.

“The tornadoes would be more localized” than a derecho, he said.

Derechos occur a couple of times a year across the United States, but most do not usually produce wind speeds near 100 m.p.h., Mr. Marsh said. The powerful derecho on Monday was similar to the “Super Derecho” of May 8, 2009, which hit several states, including Kansas, Missouri, Illinois, Kentucky, Tennessee and Arkansas. Another powerful one occurred in 2012, he said.

Damage from a derecho can cover hundreds of miles. If wind damage covers 240 miles and includes numerous reports of wind gusts of at least 58 miles per hour, then “the event may be classified as a derecho,” according to the National Weather Service. Because they cover so much territory, Mr. Lenning said, derechos can last for several hours and travel across large portions of the country.

“We’ve had derechos that start in the Chicago area and hit Washington, D.C.,” he said.

Even after such storms pass, Mr. Lenning warned, there can be dangerous aftereffects. “Stay out of Lake Michigan, because the water levels could fluctuate rapidly because of the wind’s interaction with the water,” he said.

Randy Renstrom of Grinnell, Iowa, said there was extensive damage to houses and businesses in that city, which is about 55 miles east of Des Moines. His electric provider, Alliant Energy, estimated that his power would be out for two days.

Mr. Renstrom said his wife, Ashley Renstrom-Schaefer, 37, told him that the storm on Monday was similar to what she experienced when she was in Houston in 2008 and Hurricane Ike ripped through the city: The sky quickly grew dark and streets filled with roaring winds as trees were uprooted, flattened and bent in one direction.

While Mr. Renstrom, 40, said the damage to his home was limited to a few loosened shingles on the roof, his neighbors were not as lucky. One neighbor’s trailer tipped over. Across the street, another neighbor’s garage door and underside of her porch were damaged.

“There is a randomness to whose house got hit and whose did not,” he said, “much like when a tornado touches down in a neighborhood.”

Barcelona's Interest in Isak Increased after Koeman's appointment. Larsson has a high opinion of the player (Mundo Seportivo)
Manuel Pellegrini: When you play against Real Madrid and var, it's too much
PSV and Porto are Interested in Barcelona midfielder PUC. He doesn't want to leave the club
Puyol about Barcelona: If we want to win the championship, we need to perform very well
Schalke sacked Wagner. The team has not won the Bundesliga since January
Iacini on 3:4 with Inter: Even a draw would be an unfair result, given how many chances Fiorentina created
Ramos Pro 3:2 with Betis: the Referee tried his best and didn't do anything intentionally
Source https://www.nytimes.com/2020/08/10/us/derecho-storm-chicago-weather.html