The British immigration minister said Tuesday that the U.K. and France have agreed to a plan to stop a wave of illegal immigration that has seen hundreds of migrants making their way across the English Channel into Britain this month.

Immigration Minister Chris Philp said the U.K. and France had “reaffirmed our unshakeable shared commitment” to ensure this route was “unviable.”

“It is facilitated by ruthless criminal gangs, it puts lives at risk and it is totally unnecessary,” he told Sky News after meeting with French officials in Paris.

“We have worked on a joint operational plan, a revised and new operational plan, with the objective in mind of completely cutting this route and we’re going to be working at pace in the coming days to make that plan a reality,” he said.

At least 235 migrants in 17 boats landed or were picked up by British Coast Guard and Border Force boats on Thursday, surpassing the prior week’s high of 202 arrivals in one day. 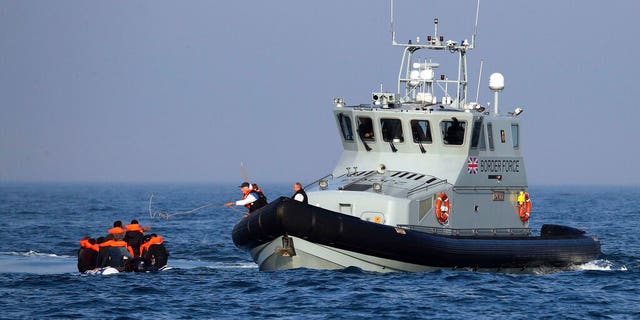 A Border Force vessel assist a group of people thought to be migrants on board from their inflatable dinghy in the Channel, Monday Aug. 10, 2020.(Gareth Fuller/PA via AP)

Philp said over 1,000 migrants had been detained by the French government this year, but that the numbers still getting through was “unacceptable” to both governments. He noted that European Union laws such as the Dublin Regulation, make it harder for the U.K. to return migrants and that Britain is set to be free of that regulation in 2021 when it fully leaves the bloc.

Philp’s remarks come after Home Secretary Priti Patel described the flows as “appalling and unacceptably high." But Patel warned that the matter was “complex” and faces “serious legislative, legal and operational barriers.”

The countries have made a number of agreements over the years to stop the flows into Britain, which primarily come either across the Channel or via the Dover-Calais port of entry, with the migrants traveling on the back of trucks or on trains.

Last month, Patel and French Interior Minister Gerald Darmanin agreed to set up a joint intelligence unit to stop the smuggling gangs that are helping the migrants make their journey into the U.K.

The U.K. Daily Telegraph reports that French authorities stop vessels but if migrants threaten to jump in the water, they withdraw as preservation of life is the priority. They then shadow the migrants to make sure they arrived in the U.K. safely.

Barcelona's Interest in Isak Increased after Koeman's appointment. Larsson has a high opinion of the player (Mundo Seportivo)
Manuel Pellegrini: When you play against Real Madrid and var, it's too much
PSV and Porto are Interested in Barcelona midfielder PUC. He doesn't want to leave the club
Puyol about Barcelona: If we want to win the championship, we need to perform very well
Schalke sacked Wagner. The team has not won the Bundesliga since January
Iacini on 3:4 with Inter: Even a draw would be an unfair result, given how many chances Fiorentina created
Ramos Pro 3:2 with Betis: the Referee tried his best and didn't do anything intentionally
Source https://www.foxnews.com/world/uk-france-plan-illegal-immigrant-boats-across-english-channel

Jimmy Carter and a lifetime's response to race

The renaissance of roller skating

Falcons-Bears game is on after A.J. Terrell’s positive COVID-19 test

Americans to political campaigns: Please, please don't come to our houses during a pandemic

Barrett could be Ginsburg’s polar opposite on Supreme Court

Presidential debates: When the whole world is watching

What are the key issues Trump, Biden will debate?

2 Injured After Car Plows Into Crowd Of California Demonstrators

Printing 'Best before date' on sweets must from Oct 1

Is Amy Coney Barrett Joining a Supreme Court Built for the Wealthy?

Republicans Get Ready to Confirm Barrett to Supreme Court Before Election

Mariah Carey on the darkest chapters of her life

The Bear fire nearly wiped this town off the map. Miraculously, one landmark survived

Learn to Profitably Advertise and Market Your Brand With These Courses

Clashes break out between Armenia and Azerbaijan over disputed region

Bhaichung Bhutia: Every country needs a good league and good teams playing in it

Brain-eating amoeba kills Texas boy, 6, as thousands ordered not to use water

Military suicides up as much as 20% in COVID era

The Latest: Americans Isner, Korda to meet at French Open

Save up to 68 percent on these grills, outdoor ovens and BBQ accessories

Polls: Biden remains ahead in Michigan and Wisconsin

Trump says he did not discuss Roe v. Wade with Amy Coney Barrett

As Covid-19 rages on, countries need to support migrant workers