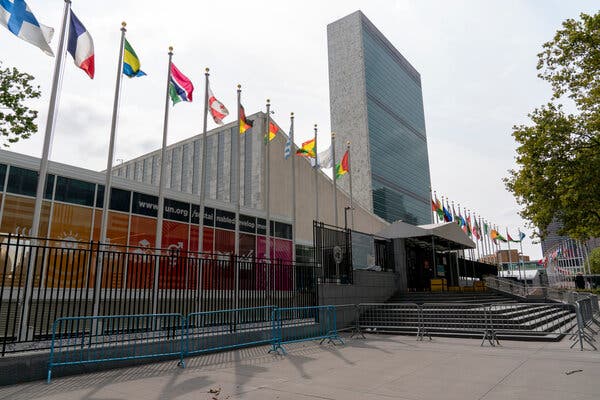 For the first time in the organization’s history, the General Assembly will be held virtually. The world leaders usually gather yearly at the United Nations headquarters in New York.Credit...Mary Altaffer/Associated Press

Taking a moment to mark a milestone.

The General Assembly will begin its annual speeches by world leaders on Tuesday, but on Monday it held a separate and largely virtual gathering to commemorate the passage of the United Nations into its fourth quarter-century.

In the cavernous hall at the headquarters of the organization, each delegation was limited to one or two envoys spaced far apart and wearing masks. The new president of the General Assembly, Volkan Bozkir of Turkey, opened the commemoration by declaring the organization’s commitment to multilateralism, a tenet of the United Nations Charter that obliges nations large and small to work together.

“Without your continued commitment to multilateralism, we would not be sitting here today,” he said.

The secretary-general, António Guterres, told the gathering that the avoidance of a third world war was a “great achievement of which member states can be proud — and which we must all strive to preserve.”

The delegates later unanimously adopted a resolution commemorating the 75th anniversary of the United Nations, “born out of the horrors of the Second World War” in 1945. “There is no other global organization with the legitimacy, convening power and normative impact of the United Nations,” it stated.

What may have once been conceived as a simple celebration now had a more poignant, even elegiac air.

“The U.N. is marking its 75th anniversary at a time of great disruption for the world, compounded by an unprecedented global health crisis with severe economic and social impacts,” the organization says on a website dedicated to the milestone. "Will we emerge stronger and better equipped to work together? Or will distrust and isolation grow further?"

The pandemic has not only illustrated worrisome tendencies among many countries to turn inward but may also be worsening them.

Add to that the rise of xenophobic strongmen around the world, climate change and a new cold war between the United States and China, and the magnitude of the problems confronting the world body become clear.

A General Assembly, minus the assembly.

There had already been a lot of speculation, but in June, U.N. leaders made it official: For the first time in the organization’s history, world leaders would not be gathering in personfor their annual meeting.

No pointed provocations from pariahs at the podium. No fervent pleas for world peace. No speeches ostensibly aimed at the assembled luminaries but really intended for constituencies back home.

At least, not in person, anyway. Not in a time of pandemic. This is no year for an entourage.

So when world leaders give their addresses this week during the General Debate, it will be in prerecorded videos shown on a giant screen in the General Assembly Hall at the U.N.’s Manhattan headquarters. But most viewers — like the speakers themselves — will be nowhere in the vicinity.

The speeches can, however, be introduced in person by representatives of member states who are based in New York. (The 75th anniversary commemoration will be handled in similar fashion.)

As it happens, should a world leader turn up intent on speaking in person — if to a largely empty chamber — he or she will not be turned away. And as recently as a few days ago, there was speculation that some, including President Trump, might opt to appear. But last week, aides said he had decided against it.

As the focus returns to diplomacy, a new push for a nuclear weapons ban.

Three years after U.N. negotiators formally adopted a treaty that would ban nuclear weapons, it remains six ratifications shy of the 50 it needs to take effect.

On Sunday, on the eve of the General Assembly, a coalition of former world leaders decided to give it another push.

Fifty-six former prime ministers, presidents, foreign ministers and defense ministers from 20 NATO countries, plus Japan and South Korea, released an open letter imploring their current leaders to join the Treaty on the Prohibition of Nuclear Weapons.

“All responsible leaders must act now to ensure that the horrors of 1945 are never repeated,” the letter urged, referring to the atomic bombs dropped on Japan by the United States, the only wartime use of nuclear weapons. “Sooner or later, our luck will run out — unless we act. The nuclear weapon ban treaty provides the foundation for a more secure world, free from this ultimate menace.”

The signers of the letter made note of the pandemic, which U.N. officials have called the greatest challenge in the organization’s history. “We must not sleepwalk into a crisis of even greater proportions than the one we have experienced this year,” they said.

Ceferin made it clear that we are categorically against it. UEFA on Bartomeu's words about the European super League
Pep on the criticism: Defeat is becoming a disaster these days because of social media. Sometimes the opponent is better than us, this is life
FIFA about Bartomeu's words about the European super League: we do not know about any agreement
Brother, don't give up on him. He's playing against us. Benzema asked Mendy not to give the ball to Vinicius at half-time of the match with Borussia
In 2010, Pirlo negotiated with Barca. The main playmaker of the generation was ready to go to Pep even in the rotation
Chugainov about Loko in the Champions League: there are Chances to get out of the group. The team looks confident and worthy
Bayern and Alaba failed to agree a new contract for the third time
Source https://www.nytimes.com/2020/09/21/world/americas/united-nations-general-assembly.html

Gérard Depardieu Rape Case To Be Re-Opened In France

Free Webinar | Nov. 12: How to Write a Great Business Book

Meghan seeks to postpone trial in privacy suit against paper

Why Covid-19 death rates have fallen, and why they could rise again

The 5 Key Metrics Every Business Needs to Track

What's Next for PayPal After Integrating Cryptocurrencies?