Cities across the globe rallied with U.S.

London — British Prime Minister Boris Johnson said Wednesday that the death of George Floyd at the hands of Minneapolis police was "inexcusable," and he understands why people are protesting.

In his first public comments on the turmoil roiling the U.S., Johnson told lawmakers "what happened in the United States was appalling, it was inexcusable, we all saw it on our screens and I perfectly understand people's right to protest what took place." 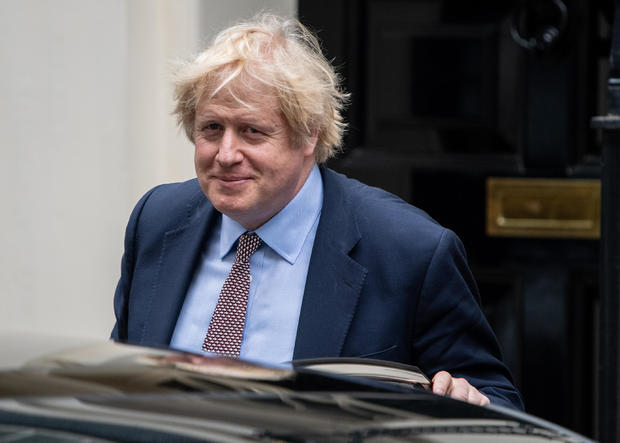 He added that protests "should take place in a lawful and reasonable way."

Johnson, who has sought to nurture close ties with President Donald Trump as he leads the U.K. out of the European union, deflected calls from the opposition to suspend exports of tear gas and rubber bullets to the United States.

Johnson said all British arms exports comply with the country's human rights obligations, "and the U.K. is possibly the most scrupulous country in that respect in the world."

Most British police officers do not carry guns, though armed units have been involved in several fatal shootings in recent years.

Johnson's chief political opponent, opposition leader Sir Keir Starmer, spoke just before the prime minister and took him to task for waiting so long to voice his thoughts on the Floyd killing.

"This has shone a light on racism and hatred experienced by many in the U.S. and beyond," said Starmer, adding: "I'm surprised the Prime Minister hasn't said anything about this yet - but I do hope that next time he speaks to President Trump, he will convey to him the U.K.'s abhorrence about his response to the events."

In his subsequent remarks, Johnson did not mention Mr. Trump or allude to the American leader's rhetoric about the protests.

Britain's police chiefs also weighed in on Wednesday, issuing a joint statement from all of the nation's forces saying they "stand alongside all those across the globe who are appalled and horrified by the way George Floyd lost his life. Justice and accountability should follow."

The statement said the police were "appalled to see the violence and damage that has happened in so many U.S. cities," and hoped for a quick resolution to the violence that has marred the protests. As thousands gathered in London for a protest sparked by Floyd's killing, the statement also sought the public's help:

"The right to lawful protest is key part of any democracy, which U.K. police uphold and facilitate. But coronavirus remains a deadly disease and there are still restrictions in place to prevent its spread, which include not gathering outside in groups of more than six people. So for whatever reason people want to come together, we ask that people continue to work with officers at this challenging time."

Policing in America amid national protests against police brutality

The police said there was a "long established tradition of policing by consent" and working with across the U.K., adding: "Officers are trained to use force proportionately, lawfully and only when absolutely necessary. We strive to continuously learn and improve. We will tackle bias, racism or discrimination wherever we find it."

But as CBS News' Charlie D'Agata reported, the recent protests around the world sparked by Floyd's killing are not being held simply in solidarity with the U.S. demonstrators: it has reignited rage against racial injustices in communities across the globe, including in Britain.

CBS News' Haley Ott was reporting from London's iconic Hyde Park on Wednesday as thousands gathered for a demonstration, chanting Floyd's name — along with, "the U.K. is not innocent"!

"My mum was a protester in apartheid and that was 30 to 40 years ago," Roz Jones, a 21-year-old student from London told the Reuters news agency. "It's pretty disappointing that we have had to come out today to protest the same thing today they were protesting, how many years ago?"

There were no reports of mass arrests as the demonstration in London grew, with little regard for social distancing guidelines.

Agent de Bruyne: Kevin is not thinking about leaving Manchester City. 90% of news is nonsense
Ronaldo is the king of alcohol. I was out with Vieri, begging for beer from the media, and I figured out how to drink in front of the coach
MLS is back: almost 9 minutes of protest against racism and a giant virtual adidas logo in the center of the field
Solskjaer on MATIC: I'm Glad he stayed. We need experience in a team with children who run around
Germany manager Bierhoff: Havertz is a player for Real Madrid
Buffon's agent: Gianluigi should become a coach. He can lead Juve
Barcelona won the court against Santos in the Neymar case. The Brazilians demanded more than 61 million euros
Source https://www.cbsnews.com/news/uk-prime-minister-boris-johnson-and-british-police-condemn-appalling-killing-george-floyd/