Two of-the-Moment Monologues and a Multitude of Karens

Mary isn’t merely white; on a paint chip she’d be somewhere between “eggshell” and “iceberg.”

Or on a psychological profile. Though she’s blond and blue-eyed and wears a snowy eyelet dress with pearl earrings, and her living room completes the picture with ivory candles in a fireplace untouched by smoke, her privilege and fragility go deeper than just her skin and décor. In her own way, she’s a Karen waiting to happen — except that her rage is mostly self-directed. She’s a woman who, for 10 years, has maintained a stately public image while keeping something huge and unseemly submerged under pressure.

In “Jack Was Kind,” a nerve-racking 70-minute livestream monologue written and performed by Tracy Thorne, it takes nearly an hour for Mary to tell us what that thing is, even though in the world of the story it has long since been infamous. The shock of the revelation — which involves her husband, Jack, a Supreme Court justice — is meant as a peep-behind-the-headlines payoff.

But for all its timeliness and Greek-drama intensity, let alone Thorne’s terrifying performance as a wife barely able to understand her complicity in the abuses of power, something about the treatment of her big confession in “Jack Was Kind” left me cold — and I didn’t understand what it was until a week later.

That’s when I saw another new livestream monologue, “Karen, I Said,” written and performed by Eliza Bent. In this wicked 45-minute satire on wokeness, the problem is evident right from the start: Karen, a 38-year-old white woman, has called the police on a man of color for delivering a meat lasagna instead of the “vegetarian goddess” variety she ordered.

It’s key that Karen is not the main narrator of her tale the way Mary is of hers. The first part of “Karen, I Said,” is an Instagram story made by another white woman, Karyn, who has been Karen’s best friend since seventh grade. (Both are played by Bent.) Evidently their politics and emotional lives have diverged, because woke Karyn is horrified by racist Karen’s behavior. “He’s not threatening you!!!” Karyn shouts, before calling the police herself, to report the “nonemergency.” “Take a chill pill, Karen!” 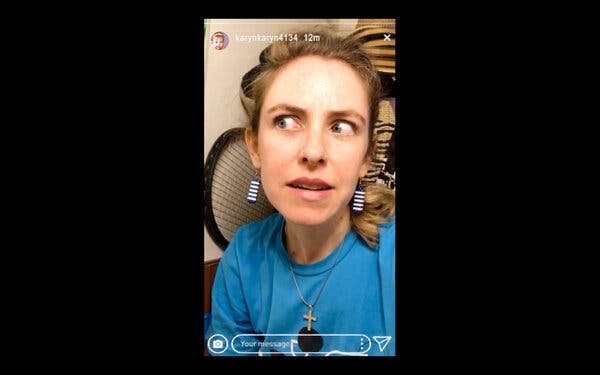 Eliza Bent as Karyn in “Karen, I Said.”

This incident is by no means the payoff of “Karen, I Said”; it’s merely where Bent’s interest begins. After about 25 minutes in which Karyn tries to share her potted understanding of enlightened thinking — she refers to “micro-aggravations” and “white prestige” — the play shifts format and point-of-view, now becoming a Zoom chat in which Karen, in her kitchen, tries to apologize for her behavior and at the same time excuse it. “I am an animal rights advocate,” she points out, suggesting she was driven mad by meat sauce. “Bet my friend Karyn didn’t mention that, did she? Correction: Ex-friend.”

In a final turn, we are introduced to Karin — pronounced, she explains defensively, “Kaaarin,” and once again played by Bent. Also white and 38, Karin is leading a meeting of a Zoom group called “Consciousness Raising, Health & Wellness as Regards to Anti-Racism, Racial Healing, and Historic Macro-Injustices in the Workspace and Beyond.” But as the virtue-signaling and language-policing pile up hilariously in the comments sidebar, she loses control of her agenda and the meeting descends into chaos.

“I used some imagery: water, icebergs, air to describe white supremacy,” she acknowledges. “I want to apologize if that was triggering for those of us here suffering from Climate Grief.”

The live version of “Karen, I Said,” directed by Tara Ahmadinejad, finished its four-performance run on Saturday, but there are plans to post a recorded version on Bent’s Vimeo page. That’s a good thing, even though this disastrous derailment of liberal good intentions is better experienced in real time. Bent’s satire — developed in previous works including “Toilet Fire” and “Aloha, Aloha, or When I Was Queen” — is more scathing when it punctures the pretensions of a visible Zoom audience of (mostly) white wannabe do-gooders like me than when it pins meme-able “Karen” behavior to the wall for remote inspection. Nevertheless, she suggests, both are elements of the same pathology.

“Jack Was Kind” — produced by the solo theater company All for One, and available through Oct. 10 on its website — never reaches that level of critical insight. In that sense its content is well matched by its familiar dramaturgical and technological form: Mary merely monologues at the camera on her computer, with little variety of tone or composition. (The director is Nicholas A. Cotz.) That Thorne sustains the story as it drops hints but avoids its punchline is a tribute to her acting skills; the portrait of a woman spectacularly ill-informed about herself is at times devastating.

It might have been even more so had it not been satisfied with easy gestures and straw antagonists. Mary quotes her overwoke, college-age daughter saying things like “Mom, you are so disappointing right now, you know that, don’t you?” as if being married to a monster were a worse sin than being the monster himself. And when the fog of details occasionally clears to reveal what Mary has learned, it’s a small lesson for us, if not for her: Women are doomed to rageful uselessness by the failures of men “going back to the dinosaurs.”

That Mary does not connect this to anything beyond her immediate world is, I came to feel, a missed opportunity, especially now. She is so focused on the way her complicity has interfered with her own comfort and family cohesion that she barely sees how her husband’s behavior has done much worse, and to many more people. Of course, that understanding would be difficult to dramatize in a one-woman play, and Thorne seems more interested in character as something playable than in character as a moral phenomenon.

“Karen, I Said,” is likewise written to its author’s strengths as a performer — Bent is notably excellent at accents and speech patterns — but reaches way past the easy tropes of Karenism and even the easy explanations of it. If “Jack Was Kind” roots around in the gender dynamics that feed the phenomenon, “Karen, I Said” is looking at the various ways people attempt to grow past their privilege, usually failing. Thorne is interested in the fact of white fragility as experienced by women, but Bent is interested in what you do about it.

It’s an important distinction because, ultimately, it doesn’t much matter where the problem of privilege comes from. Dealing with it does. The really withering thing about “Karen, I Said” is its suggestion that “dealing with it” — in Instagram stories, Zoom meetings and perhaps even the theater — is just another way of enjoying it.

Mitryushkin on the move to Fortuna: Germany is a country of goalkeepers. I can learn a lot here
Scott Micromini: There is no point in beating PSG if you don't play the same way with Leipzig
Alejandro Gomez: Have Ricica was the coronavirus, and he fell into a depression. Now everything is fine with him
Lyon wants to rent Griezmann and is ready to give Barca Depay for free in the event of a deal (Okdiario)
In the attack against Bayern, Nikolic can use the Hoffenheim technique-luring into the pressure and a long pass to the Alaba zone
Bayern - Loko-Utkin's first match as a commentator: insured Yevgeny Mayorov, set up in the corridor, after the return 0:5 joked about beer
Former Spartak goalkeeper Mitryushkin became a player of Fortune
Source https://www.nytimes.com/2020/09/27/theater/Karen-I-Said-jack-was-kind.html

The Memo: Florida and Pennsylvania hold keys to victory

Lessons From the 2000 Election

Help! I Think My Girlfriend Is Making Up Her Sensitivity to Smell.

Man accused of planning sexual assault at River North hotel so he could sue has a history of falsely claiming he’s paraplegic in lawsuits, prosecutors say

My Boyfriend Says I’m Turning Into My ‘Drama Queen’ Mom. Is This My Destiny?

What Could Have Kept Me Out of Prison

What 2,392 Incarcerated People Think About #DefundThePolice

HSBC plans to speed up restructuring as profits drop 36%

Burgundy and Gold grab bag: Dallas, was it just a dream?

There Is Nothing Left to Say. It’s Just Time to Vote.

Is cash in danger of extinction?

Coronavirus deaths are rising again in the U.S., as feared