President Trump denied that he was taken to an underground White House bunker during tumultuous protests in Washington D.C. this past weekend and pushed back on criticism of his walk Monday to the historic St. John's Episcopal Church.

In an interview Wednesday on the "Brian Kilmeade Show," the president said that the mainstream media was to blame for both narratives.

"Well, it was a false report. I wasn't [there]. I went down during the day and I was there for a tiny little short period of time and it was much more for an inspection," he remarked.

According to a report in the New York Times, Secret Service agents had "abruptly rushed the president to the underground bunker used in the past during terrorist attacks."

A senior administration official confirmed the information to Fox News after The New York Times first reported the story on Sunday.

The president explained he had only ever visited the bunker two or three times and "all for inspection" because "someday [he] may need it."

"And, I read about it like [it was] a big thing. There was never a problem. We never had a problem. Nobody ever came close to giving us a problem," he assured.

He told Kilmeade that while the Secret Service did not escort him anywhere for his safety, they said it "would be a good time to go down [and] take a look." 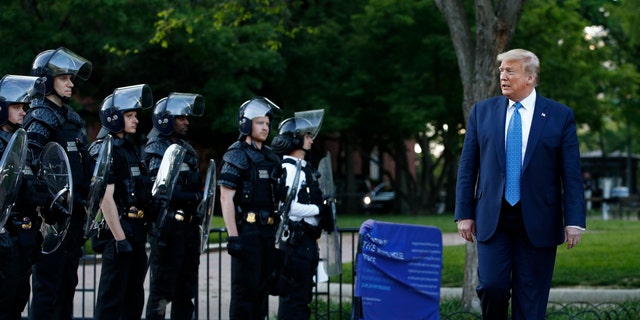 President Donald Trump walks past police in Lafayette Park after visiting outside St. John's Church across from the White House Monday, June 1, 2020, in Washington. Part of the church was set on fire during protests on Sunday night. (AP Photo/Patrick Semansky)

Trump also argued against eyewitness accounts Monday night of tear-gassing and beating protesters and members of the media who hindered his pathway to St. John's Church across the street.

“Seeing President Trump stand in front of St. John’s Episcopal Church while holding a Bible in response to calls for racial justice — right after using military force to clear peaceful protesters out of the area — is one of the most flagrant misuses of religion I have ever seen,” Interfaith Alliance President Rabbi Jack Moline said in a statement. "This only underscores the president’s complete lack of compassion for Black Americans and the lethal consequences of racism.”

The Right Rev. Mariann Budde, bishop of the Episcopal Diocese of Washington, to which St. John’s belongs, said she was “outraged” by the moment and noted that Trump didn’t pray during his visit.

The president also denied knowledge of whether or not there were protesters surrounding the area.

"Nobody tells me that," he noted.

"It was very fast. I think it was very symbolic. I did hold up a Bible. I think that's a good thing, not a bad thing. And, many religious leaders loved it," Trump affirmed.

"Why wouldn't they love it? I'm standing in front of a church that went through trauma."

Bayer sports Director Feller on Havertz: We agreed that if possible, he could leave this summer
Roma midfielder under has agreed a 5-year contract with Napoli for 3.5 million euros a year
Baros will end his career at the end of the season
Pogba and Brunu were injured when they collided in training. The Bournemouth game is in question (Daily Mail)
Ex-President of Barca Gaspar: Messi has a few more years to be the best player in the world
Morata scored a double for Atletico for the first time since March last year
Rummenigge on Tiago: there have been no Contacts with Liverpool, but he wants something new
Source https://www.foxnews.com/media/trump-bunker-inspection-church-tear-gas

Protesters block roadway to Mount Rushmore ahead of Trump’s arrival

‘Hamilton’ film offers our imperfect union a message of hope

CNN slights Mount Rushmore as 'slave owners' in 2020, but called it 'monument to 4 great presidents' in 2016

Cleveland Indians "to determine the best path forward" for name

Dozens of administrators attended a school reopening meeting in California. One of them tested positive for Covid-19

The Cleveland Indians are considering a name change

Column: So you couldn’t focus on a book for a while, but now you’re ready? 6 good books to read right now