On Tuesday, a day after mobilizing military policemen and an Army Black Hawk helicopter for aggressive crowd control during a photo op, President Trump deployed elements of the 82nd Airborne Division to Washington.

These were down payments on his pledge to use the nation’s armed forces to quash the nationwide protests triggered by the death of George Floyd, if the president is not satisfied with state and local efforts.

Legal and military experts have debated whether Mr. Trump can or should deploy troops in response to the protests. On Wednesday the secretary of defense, Mark Esper, broke with the president, saying he did not think the military was needed.

While the protests continue, the widespread looting and arson that marked some of them over the weekend have abated. What’s left, though, is yet another example of Mr. Trump’s dangerous fetishization of the military.

Early on, he surrounded himself with what he called “my generals” — John Kelly, James Mattis, H.R. McMaster and others. He seems obsessed with military parades. He panders to excessively violent military personnel. Two common threads connect it all: a desire to obscure his own flagrant evasion of military service and to gain vicarious credibility as a tough guy.

Through the first three years of his administration, Mr. Trump’s fatuous strutting amounted to a largely harmless and certainly transparent charade. Now, though, he actually appears to be contemplating a form of martial law, oblivious to the customary American abhorrence for it.

Unlike, say, China’s People’s Liberation Army, U.S. forces are essentially expeditionary, focused on external threats and overseas operations. There is a clear historical aversion to using the military for domestic law enforcement, and federal laws restrict military authority and actions in the domestic context.

It’s true that the Insurrection Act of 1807 allows the president to deploy the armed forces domestically to quell civil disorder that renders ordinary law enforcement impracticable. But presidents have used it only about 20 times, in most cases at the request of a state governor.

Although the statute does not require state consent, it is clearly preferred. The only explicitly defined instances in which the federal government can ignore state resistance, established by expansions of the original act during and after the Civil War, are direct rebellion against federal authority and persecution of African-Americans by the Ku Klux Klan. Neither instance remotely fits the present circumstances. (An amendment passed in 2006 granting the president broader authority to deploy federal troops without state consent when state and local law enforcement have been compromised was opposed by all 50 governors and repealed in 2008.)

The last president to invoke the Insurrection Act was George H.W. Bush in 1992, to calm the riots in Los Angeles over the acquittal of a policemen on trial for beating Rodney King, also a black man. Gov. Pete Wilson of California had requested federal assistance without showing that state and local agencies were unable to enforce the law, and legal scholars and law-enforcement experts have since criticized that request as an overreaction. 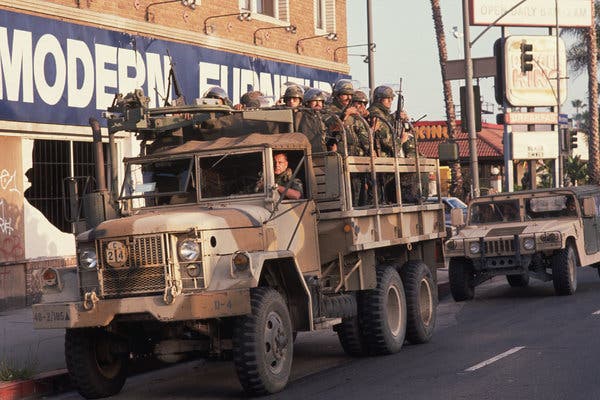 Troops arriving in Los Angeles after rioting in the wake of the verdict in the Rodney King case, in 1992.Credit...Peter Turnley/Corbis/VCG, via Getty Images

In any case, no state has thus far asked for national military assistance, and several have overtly refused Mr. Trump’s offer. Thus, the legal basis for his resort to the act is shakier than Mr. Bush’s was. (Mr. Trump has more leeway to deploy troops in Washington than in the states.)

Beyond legal risks, there are practical ones. The Covid-19 pandemic has already stretched the U.S. military’s range of functions, claiming some of its resources for public health. Deploying the military domestically also increases the risk of spreading the disease among the troops. And the more we demand of the military at home, the less able it is to perform its core functions overseas, thus compromising the United States’ strategic interests.

None of this, obviously, matters to the president. His priority is not American interests. It is getting re-elected. Having botched the Covid-19 response and squandered one opportunity to cast himself as a wartime president, he now sees another chance — to run as a hard-core law-and-order candidate, with the military as the ultimate martial prop.

As Mr. Esper asserted on Wednesday, the military must remain an apolitical institution. If Mr. Trump does decide to use the military for political intimidation, it will fall to the military itself to show restraint, even if it means disobeying orders.

Whether it will do so is open to doubt. Certainly, the early hope that generals would act as the “adults in the room” has proved hollow, in part because Mr. Trump simply removed those who offered resistance, but also because it was unrealistic to expect professionals hard-wired to respect civilian control to resist it on a wholesale basis.

Traditionally, servicemembers must carry out orders as long as they don’t consider them patently illegal — or else resign. The military now finds itself in highly unusual, if not unprecedented, circumstances, and may need new standards to handle them.

In 2010, Andrew Milburn — then an active-duty Marine Corps lieutenant colonel, now a retired colonel — wrote that a military officer’s oath and code of ethics accord him the “moral autonomy” to disobey an order he believes would harm the United States, its military or the soldiers in his charge “in a manner not clearly outweighed by its benefits.” In his view, “generals like being generals, and thus would select judiciously those causes for which they were prepared to sacrifice their careers.”

Mr. Milburn’s argument was controversial then; I voiced deep skepticism about it in a piece in Harper’s. But over the course of nine years — perhaps especially in the last three — it has gained some traction in the military, and U.S. military doctrine has come to recognize greater flexibility in dealing with orders considered improper.

In fact, the general whom Mr. Trump tasked with responding to the protests, Chairman of the Joint Chiefs of Staff Mark A. Milley, has advocated such flexibility. In 2017, as Army chief of staff, he gave a speech for the Atlantic Council in which he expressed support for “disciplined disobedience” for the sake of a mission’s “higher purpose.”

We may be close to the moment at which active-duty servicemembers need to consider disciplined disobedience. American democracy depends in part on the ingrained commitment of its armed forces to civilian control. But as more and more military leaders — including, publicly, two of General Milley’s predecessors — are coming to recognize, the risk has increased that a president will abuse that control to subvert the very democracy it is meant to uphold. There may yet be hope that they will decline to facilitate Mr. Trump’s dangerous overreach.

Jonathan Stevenson is a senior fellow at the International Institute for Strategic Studies and managing editor of Survival. Trained as a lawyer, he served on the National Security Council staff from 2011 to 2013 and as a professor of strategic studies at the U.S. Naval War College.

Calvert-Lewin, Saka and Barnes are called up to the England team for the first time. Maguire returned to the squad
Lazio leases Pereira from Manchester United with a buy-out option for 27 million euros. Potentially the biggest transfer in the history of Rome
Dest will play for Barca under the 2nd number. Dani Alves was playing under it
Bielsa on Guardiola: his Barcelona was one of the best in history. Pep teams play like no other
Barcelona offers 10 million euros with bonuses for Eric Garcia, Manchester City wants 30 million
Atletico are close to renting Torreira from Arsenal with a buy-out option. They believe that the Party will remain
Barcelona have bought a new Dani Alves. Meet Sergino Dest
Source https://www.nytimes.com/2020/06/03/opinion/trump-army-insurrection-act.html

Coronavirus clusters in NYC growing at an alarming rate

L.A. Chamber Orchestra goes all in on a virtual, and visual, concert season

‘Mulan’ Will Stream On Demand This Tuesday, October 6

LeBron James’ More Than A Vote group brings in over 10,000 poll workers

Creepy COVID-19 Halloween masks are for sale on Amazon

Trump's attacks on vote-by-mail are new, but little else about his war on voting is

‘Raised By Wolves’ Creator On Season One Finale & Season 2: Sometimes The Scariest Thing Comes From Within

California to develop plan for reparations for Black Americans

When Will ‘Raised By Wolves’ Season 2 Premiere on HBO Max?

Galleries and an Auction House Follow Collectors to Florida

You've never seen a movie character like Old Dolio in 'Kajillionaire.' Here's how she came to be

Everything You Need to Know About Digital Nomad Visas

There are proven ways to keep protests peaceful. Trump is doing the opposite.

Map: Mail-In Voting Rules By State — And The Deadlines You Need

What is B2B and B2C in marketing?

How A Barrett Confirmation Would Compare To Past Supreme Court Timelines

Venus isn't habitable -- and it could be all Jupiter's fault

Influencer Chiara Ferragni Is Pregnant With Baby No. 2

Madrid back under city-wide lockdown after surge in coronavirus cases

It Took a While, but the Yankees Win a Doozy

We are one vote away from losing our fundamental liberties, Sen. Ted Cruz says

How to transition your home for fall, according to interior designers

In another breakthrough, Israel to begin negotiations with Lebanon over maritime border

These brands still haven't replaced their logos. Here's why

Google to pay $1 billion over 3 years for news content

Latinas in this state faced a huge wage gap. Then came coronavirus.

Kavak becomes the first Mexican startup to become a 'unicorn'

NFL pushes back Titans vs. Steelers after more COVID-19 positives

‘The Masked Singer’ Shocker: Mickey Rourke Unmasks Himself Before He’s Even Eliminated