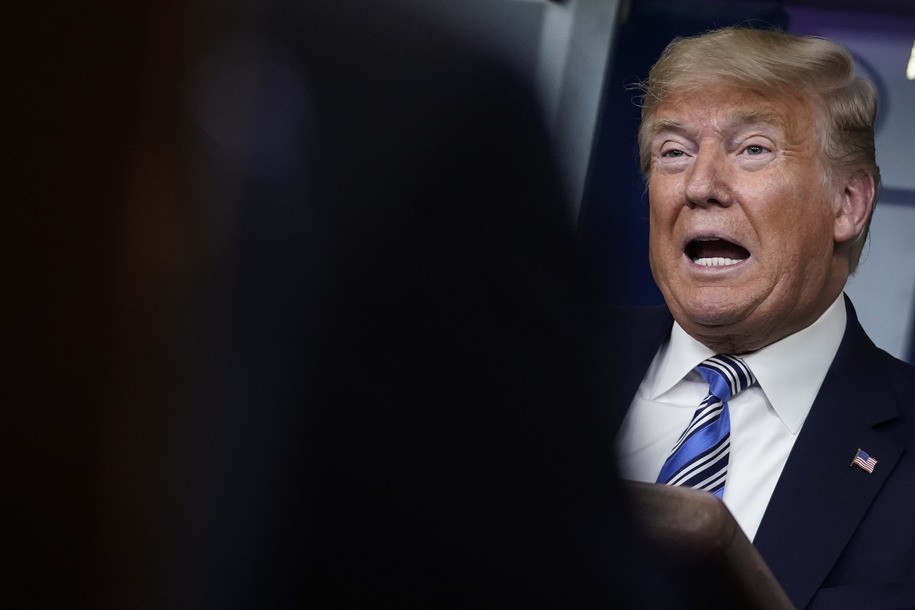 Fewer and fewer people are into ... this.

This is the current national state of play with Donald Trump as he faces his worst job ratings in two years:

It’s a legit roadmap of the 2020 presidential election. 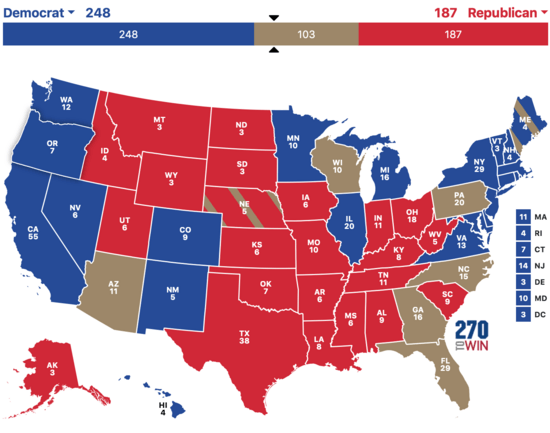 It’s a little confusing, since the color blue in the first map “approves of Trump,” while in the second map it means the exact opposite. But it’s still not too hard to sort out: Blue states really don’t like Trump. Red states like Trump. There are the edge-case states—states that are evenly divided on the question, but aren’t current battlegrounds (Iowa, Montana, New Mexico, Ohio, South Carolina, Texas, and Utah). And then there are the seven battlegrounds—all states that voted for Trump in 2016, and all states in which his numbers are currently net-negative.

Arizona continues to surprise. Who would’ve thought it looks better for presumptive Democratic nominee Joe Biden than Pennsylvania does? And worse for Trump, his numbers are trending even lower. For example, let’s look at Arizona:

Since the coronavirus pandemic hit, Trump has gone from -10 net favorables in Arizona, to -14. Arizona has around 4 million registered voter. Going from -10 to -14 net favorability means that around 160,000 Arizona voters changed their mind about Trump.

Democratic Sen. Kyrsten Sinema won the state by just 56,000 votes in 2018. Democrats picked up the secretary of state office by 20,000 votes. These shifts in public opinion may seem small, but in a tight battleground state, every point matters. And it should be noted, the shift in job approvals in Arizona started during the impeachment hearings. They really did set the stage.

Florida is Florida, balanced on a razor’s edge, but once again, impeachment took a bite out of Trump, and the pandemic is further widening the split. Looking at Michigan, however, and impeachment didn’t leave any mark, but the pandemic is:

Click around and see for yourself, but the virus is having an impact in every one of these battleground states. (In every state, actually, but only the battlegrounds are close enough for it to matter.) This is the reason much of the battleground polling lately has been so gaudy-good for Joe Biden and Democratic down-ballot candidates (like the recent Civiqs surveys out of North Carolina and Georgia. Even South Carolina looked better than 2016 numbers).

Will it stay that way? We can’t assume that, of course. It helps us that Trump isn’t trying to actually win new voters. The a-hole is running ads mocking Biden for wearing a mask, when 72% of Americans support wearing masks. He's playing to his peanut gallery. He’s certainly not trying to minimize the continued death toll, having given up entirely on the matter. He’d rather pretend everything is fine so states open up as quickly and as fully as possible. And while some renewed economic activity is inevitable as restrictions loosen up, that still won’t save tens of millions of jobs before November.

So will Trump be able to recapture that support he’s recently lost? It’s possible! The charts obviously do show their up-and-down fluctuations over the last four years. A skilled, capable, compassionate, and focused leader could certainly manage to parlay this crisis into broad popular support. President George W. Bush hit 90% approvals after 9/11, despite having ignored a report that literally warned that al-Qaida was about to strike the nation. The public wants to rally around their leader in a crisis.

Trump isn’t skilled or compassionate or capable. He’s a barely functioning adult. And this crisis has made it harder and harder for people to cling to the notion that Trump is actually a good president.

It’s hard for people to admit that their sincerely held beliefs were wrong. And politics is now akin to religion—part of one’s self-identity. Leaving the Republican Party is like leaving a cult. Not everyone can manage it. And yet, it’s happening. It happened in 2018, with suburban white women testing the waters, and the water was fine! Newly re-minted House Speaker Nancy Pelosi wasn’t the boogeyman! She ended up being nothing like that asshole in the Senate, Mitch McConnell.

Can Trump reverse that trend? Sure, it’s within the realm of possibility, but no, he won’t. He can’t. He probably doesn’t even want to.

Agent de Bruyne: Kevin is not thinking about leaving Manchester City. 90% of news is nonsense
Ronaldo is the king of alcohol. I was out with Vieri, begging for beer from the media, and I figured out how to drink in front of the coach
MLS is back: almost 9 minutes of protest against racism and a giant virtual adidas logo in the center of the field
Solskjaer on MATIC: I'm Glad he stayed. We need experience in a team with children who run around
Germany manager Bierhoff: Havertz is a player for Real Madrid
Buffon's agent: Gianluigi should become a coach. He can lead Juve
Barcelona won the court against Santos in the Neymar case. The Brazilians demanded more than 61 million euros
Source https://www.dailykos.com/stories/2020/5/29/1948516/-Trump-keeps-screwing-everything-up-and-it-s-killing-him-in-the-battleground-states