Speaking after the legendary U.S. Navy Blue Angels roared overhead, President Trump ushered in the July 4th weekend Friday night at Mount Rushmore in South Dakota with a full-throated condemnation of "far-left fascism" and a defense of "Judeo-Christian principles."

The president asserted that recent attacks on the nation's monuments, alongside "cancel culture" and the rise of the Marxist ideology of the Black Lives Matter (BLM) organization, were symptoms of a "left-wing cultural revolution" that was threatening to "overthrow the American revolution." BLM explicitly advocates the destruction of the "nuclear family struture," which Trump said was in fact the "bedrock of American life."

"We only kneel to Almighty God," Trump remarked, in a clear shot at athletes who kneel in protest during the national anthem. "We will not be intimidated by bad, evil people. It will not happen."

Trump went on to characterize endemic efforts to terminate and humiliate dissent as a form of "totalitarianism" and an "attack on our magnificent liberty" -- and promised that it "will be stopped very quicky."

“This movement is openly attacking the legacies of every person on Mount Rushmore," Trump said, referring to George Washington, Thomas Jefferson, Theodore Roosevelt and Abraham Lincoln.

"From this night, and from this magnificent place, let us go forward united in our purpose and rededicated in our resolve. We will raise the next generation of American patriots."

Trump's comments followed a series of protests and riots across the country that led to the destruction of numerous monuments, as well as the terminations of high-level academics and policy experts simply for challenging Black Lives Matter.

"They want to silence us," Trump said, as cheers of "U-S-A!" broke out. "But we will not be silenced. ... We want free and open debate, not cancel culture. ... Their goal is not a better America. Their goal is to end America. ... But just as in centuries past, the American people will stand in their way."

Trump specifically praised the FBI's recent arrest of the "ringleader" of several statue attacks, as well as his executive order to increase punishments for those who deface monuments.

'"Tonight, as we meet here tonight, there is a growing danger that threatens every blessing our ancestors fought so hard for, struggled, and bled to secure," Trump said, warning of a concerted attempt to "wipe out our history" and "indoctrinate our children."

That was an apparent reference to public schools' decision to teach false information from The New York Times' "1619 Project." The author of that project has acknowledged her own anti-white racism, and core claims of the project have been debunked by historians.

"Those who seek to erase our heritage want Americans to forget our pride and our great dignity, so that we can no longer understand ourselves or America’s destiny,” Trump said.

It is time, Trump said, for American politicians to summon "bravery" to confront the moment. 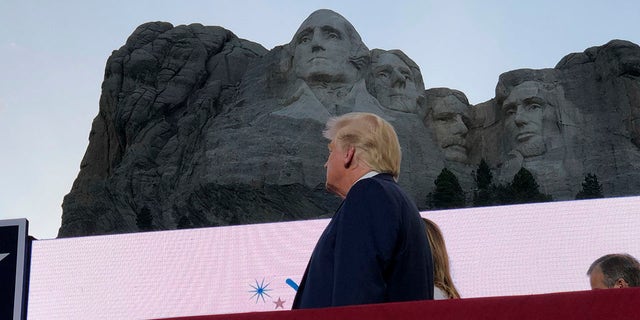 The event drew thousands of spectators, most of them without masks, even as coronavirus cases spike across the country. The president was set to speak before a big fireworks show, the first to be held at the site in over a decade.

Hours before Trump arrived, protesters blocked a road leading to the monument. Authorities worked to move the demonstrators, mostly Native Americans protesting that South Dakota's Black Hills were taken from the Lakota people against treaty agreements. About 15 protesters were arrested after missing a police-imposed deadline to leave. 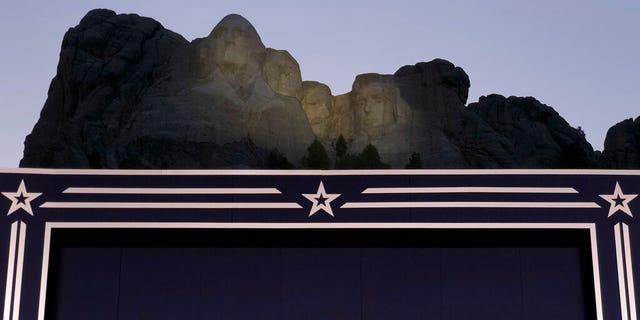 Trump was expecting a South Dakota show of support, with the state Republican Party selling T-shirts that feature Trump on the memorial alongside George Washington, Thomas Jefferson, Theodore Roosevelt and Abraham Lincoln. But concern about the coronavirus risk and wildfire danger from the fireworks, along with the Native American groups' protests were also present.

Republican Gov. Kristi Noem, a Trump ally, had said social distancing won't be required during the event and masks will be optional. Event organizers were to provide masks to anyone who wanted them and planned to screen attendees for symptoms of COVID-19.

Fox News' John Roberts and The Associated Press contributed to this report.

We found out how the fascinating logo of Iceland appeared: Game of thrones has nothing to do with it, the source of audacity is the success of the national team
Ronaldo-Casillas: Proud that we shared great moments
Bayern want to sell Boateng in the summer. The club has no offers yet
Solskjaer on the Europa League: a Trophy would be a big step forward for Manchester United. We want to win something
Juve have contacted Zidane, Pochettino, Inzaghi, Spalletti and Gasperini about working at the club. The Real Madrid coach refused
Coach Of Brentford: We went from a mid-level team to the third team of the season. This is an incredible achievement
Burnley are not going to sell Tarkowski for less than 50 million pounds
Source https://www.foxnews.com/politics/trump-in-fiery-mount-rushmore-address-decries-rise-of-far-left-fascism-calls-on-americans-to-rise-up