During his remarks at Mount Rushmore on Friday evening, President Trump said he plans to establish, via executive order, a "National Garden of American Heroes," which he described as "a vast outdoor park that will feature the statues of the greatest Americans to ever live."

"The American people are strong and proud, and they will not allow our country and all of its values, history, and culture to be taken from them," Mr. Trump said.

"To destroy a monument is to desecrate our common inheritance. In recent weeks, in the midst of protests across America, many monuments have been vandalized or destroyed. Some local governments have responded by taking their monuments down," the executive order said.

"My Administration will not abide an assault on our collective national memory," the order added. "In the face of such acts of destruction, it is our responsibility as Americans to stand strong against this violence, and to peacefully transmit our great national story to future generations through newly commissioned monuments to American heroes."

The order mandates the creation of a task force, which will develop plans for creating the garden. The garden will be available for public access by no later than July 4, 2026, according to the order. 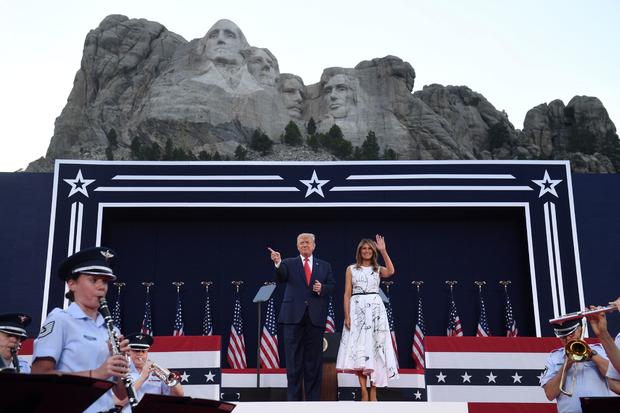 Mr. Trump's event drew concerns about the spread of the coronavirus, as several states have seen a serious uptick in cases in recent weeks. Several tribes in the region raised concerns about the event leading to an outbreak of the virus, as Native American communities have been particularly ravaged by COVID-19.

"The president is putting our tribal members at risk to stage a photo op at one of our most sacred sites," Harold Frazier, chairman of the Cheyenne River Sioux Tribe, told the Associated Press.

Dybala became the MVP of Serie A-2019/20, Immobile-the best forward
Real Madrid: Casillas will always be a Real Madrid player. The best goalkeeper in the history of Spain
In Spain, complete chaos: Espanyol refuses to fly out of La Liga, Depor and all the others - from Segunda
Ferran Torres passed a medical before transferring to Manchester City and signed a contract until 2025 (Fabrizio Romano)
Emmanuel Adebayor: Mourinho is the best coach in the history of football
Casillas announced his retirement
De Gea has found a double-the coach of Scottish Ross County. In his team, 19% of the players are called Ross – even all the goalkeepers
Source https://www.cbsnews.com/news/watch-live-trump-to-deliver-4th-of-july-remarks-at-mount-rushmore/

U-M regents had to push president for outside counseling for provost survivors, sources say

Of Course, the GOP Thinks Fact-Checkers Are Biased

Traveling outside Illinois? Chicago residents must quarantine after visiting 22 states and Puerto Rico. Here’s what you need to know to avoid a large fine.

2020 PGA Championship: What to know about the event

Trump targets 'false' ads from Big Pharma, says he is first president 'to take them on'

Curbside Larry is not a pitchman. He's a literacy hero

Roku Ultra, our favorite streaming device, is on sale now

U-M regents had to push president for outside counseling for provost victims, sources say

Trump on John Lewis' legacy: "He didn't come to my inauguration"

China Won't Accept 'Theft' of TikTok, According to State Newspaper