Trent Dilfer, a Super Bowl champion with the Baltimore Ravens, knows a thing or two about evaluating quarterbacks in the NFL. And in a year where the position is thriving at an all-time high, Dilfer says no crowd noise in stadiums due to the coronavirus pandemic, is a huge reason why veteran quarterbacks are having success, especially on the road.

“It’s massive,” Dilfer, who spoke with Fox News in a recent interview, said about the lack of crowd noise. “I didn’t watch a ton of the pregame stuff, but if that wasn’t at the top of the list of topics, then producers failed miserably. Veteran quarterbacks, the only thing that they worry about is crowd noise. That’s it.”

Dilfer said when quarterbacks are on the road, they worry about how they are going to communicate with their offensive linemen, running backs and wide receivers. The goal for the quarterback is to get the offense into the best play, but without a crowd noise, communication isn’t an issue now.

“Even an average guy like me. If I was going into Minnesota, I’d think about torching them,” Dilfer added. “With the noise, some of the things I would worry about are, ‘Will my left tackle hear the snap count?’ ‘How will I audible?’ ‘Will my running back hear me make a check?’" 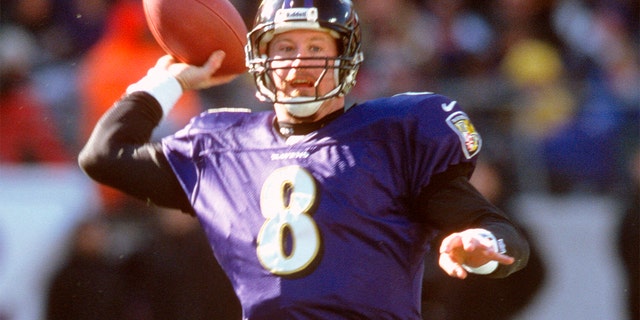 BALTIMORE, MD - DECEMBER 31: Trent Dilfer #8 of the Baltimore Ravens throws a pass against the Denver Broncos during the AFC Wild Card Game December 31, 2000 at PSINet Stadium in Baltimore, Maryland. The Ravens won the game 21-3.. (Photo by Focus on Sport/Getty Images)

Seattle Seahawks quarterback Russell Wilson, the frontrunner for NFL MVP, is completing a whopping 82.5 percent of his passes with 610 passing yards and nine passing touchdowns, five of which came against Bill Belichick’s Patriots defense in Week 2.

In Seattle’s Week 1 matchup, Wilson completed 31 of 35 passes for 322 yards and four touchdowns against the Falcons in Atlanta. In two games, Wilson has almost as many passing touchdowns (9) as incompletions (11). Wilson is already one of the best quarterbacks in the league. Now, he doesn’t have to deal with opposing teams’ crowd noise, which will make him that much better.

In 2018, New Orleans Saints quarterback Drew Brees, completed 74.4 percent of his passes, which is an NFL record. So far in 2020, nine quarterbacks have a completion percentage better than 70 percent, four of them would break Brees’ impressive record.

“And for pass rushers, quarterbacks can use the snap count as a weapon,” Dilfer added. “So, when we’re at home, we can eliminate pass rushers through snap count. But you can’t eliminate them on the road because there is no snap count, it’s too loud. So, you’re not worried about their pass rush on 3rd-and-8 if there is no crowd noise because you can dummy count them, triple-count them, you can get them hesitant and right off the ball. It’s the biggest thing in terms of X’s and O’s with COVID-19. These guys are absolutely going to shred teams on the road.”

Hector Herrera on 0:4 with Bayern: We played very well with the best team in the world. Don't write off us
Antonio Conte: Borussia are well prepared, they have a lot of potential. Inter could have won
Guardiola on 3:1 with Porto: a Good start. In the Champions League, there are 5 substitutions, the players who came out showed themselves well
Flick about Mueller: he's a continuation of the coach's hand on the field. Thomas manages the team, drives it forward
Gian Piero Gasperini: Miranchuk has just started training. We have a lot of players, rotation is inevitable
Goretzka about 4:0 with Atletico: We were lucky that we didn't miss out at the beginning. It took 10 minutes to get involved
Klopp on the win over Ajax: it wasn't radiant football, but we scored three points
Source https://www.foxnews.com/sports/trent-dilfer-veteran-nfl-qbs-shred-defenses

Even with mute, the final presidential debate could be more hostile than the first

Divided reactions in US as pope backs same-sex civil unions

Face to face: Trump, Biden to meet for final debate

Quibi Is Shutting Down After Less Than a Year

This $30M duplex wows with the largest outdoor space in Manhattan

A Dozen Protesters in Nigeria Reported Killed by Security Forces

Blast from the past: Bushwick subway platforms covered in graffiti

Finding Comfort in the In-Between Season

Coronavirus vaccines could be available for all Americans by March: HHS Secretary Azar

AOC's first Twitch livestream was one of the most-watched ever

How Will The Limited Supply Of Antibody Drugs For COVID-19 Be Allocated?

Videos unclear on whether cruiser led moped rider to crash

Uncovering the Hidden $372 Billion Cost of Our Criminal Justice System

COVID-19 Vaccines Should Be Available to the General Public by April 2021, Health Officials Say

Incels in the Mist

How to watch the final presidential debate between Trump and Biden

Tesla scores a profit for the fifth straight quarter

The Coronavirus Has Claimed 2.5 Million Years of Potential Life in the U.S., Study Finds

Two Children Killed in Trenton, Where Violence Is Surging