TPG in Talks to Acquire Goal, the Soccer Website, for $125 Million

LONDON — DAZN Group, the sports media company owned by the billionaire Len Blavatnik, is in talks to sell Goal.com, the world’s largest online soccer news website, to the investment giant TPG for as much as $125 million, according to executives with knowledge of the discussions.

The sale of Goal, which offers content in 19 languages, comes during continuing financial difficulties at DAZN, which has been among the sports media companies worst affected by the coronavirus pandemic, which has shut down sports leagues and competitions worldwide. DAZN (pronounced da-zone) has invested billions of dollars on sports rights for its eponymous online sports streaming business, which has sustained heavy losses in its efforts to grow its subscriber base.

The company last year hired Goldman Sachs to explore fund-raising options, including the sale of an equity stake. The Financial Times last month reported that DAZN’s need for cash had grown during the pandemic, leaving it fighting to secure its financial future. In the absence of live sports events, subscribers have withheld payments or declined to renew agreements, while DAZN has taken its own emergency measures, including furloughing hundreds of staff members and suspending rights payments.

TPG, which has investments in a broad range of other media and entertainment companies, including Spotify and the Creative Artists Agency, would be acquiring Goal through one of its affiliates, according to people familiar with the discussions, who declined to be identified because the deal had yet to close. The talks, the executives said, started late last year as part of DAZN’s plans to focus and grow the cash-intensive streaming business. Under the proposals for the sale, DAZN has committed to continue working with Goal. 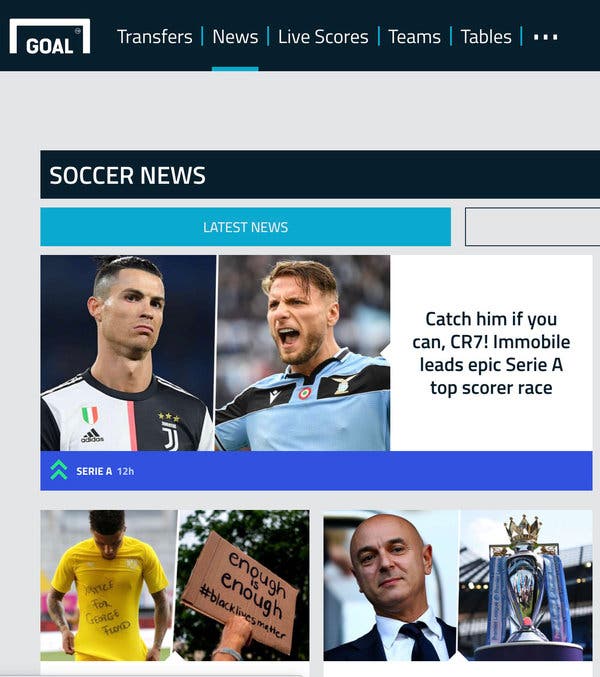 A screen grab from Goal.com.

Much of that cash was invested in the sports streaming business as it faced the twin challenges of competing with well-funded incumbents for broadcast rights while also investing in expensive streaming technology. Goal was bought in 2007 by Perform Group, its parent company’s name until it became known as DAZN Group in 2018, for 18 million pounds ($22.7 million).

Blavatnik, ranked the 51st richest person in the world by Forbes magazine, has bet big on DAZN, which its boosters describe as the Netflix of sports. According to the group’s most recently published set of accounts, through 2018 the company lost more than a billion pounds ($1.3 billion) in two years. It has since spent far more on acquiring one of the largest sports rights portfolios in the world, from exclusive rights to the top names in boxing to premium soccer properties like Champions League broadcast rights for Germany and Italy’s Serie A.

DAZN’s next set of results, for the year through 2019, is expected to be published on Companies House, Britain’s registrar of companies, in September and will most likely show a larger loss as subscriber numbers have not kept pace with investments, according to a person familiar with DAZN’s finances.

News of the potential sale comes as Blavatnik on Wednesday cashed in part of his investment in Warner Music, in the year’s largest initial public offering, for $1.9 billion. Blavatnik, a Briton born in Ukraine, built his fortune in Russia’s oil industry before broadening his interests through investments in a range of media, telecoms and entertainment properties.

DAZN, based in London, has grown rapidly since striking a $2 billion deal for 10 years of Japanese soccer rights in 2016. Its business model is based on providing exclusive live sports content on a market-to-market basis at a lower price than those charged by most cable companies. In the United States, the company has built a reputation as the destination for combat sports, with a particular focus on boxing, with a number of eye-catching deals, notably a $365 million, 11-fight agreement with the Mexican star Saúl Álvarez, who is known as Canelo.

In Europe, DAZN’s focus has been on soccer, a market that has been notoriously difficult for new entrants to penetrate with legacy media companies spending large sums on rights that are typically available for no more than three years and offsetting their costs by bundling them together with broadband or cellphone offerings, something DAZN is currently unable to do. Its biggest plays so far included buying a portion of domestic soccer league rights in Germany and Italy, and exclusive Champions League rights for some of the markets it currently operates in.

John Skipper, shown in 2016 while still at ESPN, was named chairman of DAZN in 2018.Credit...Chuck Burton/Associated Press

The spending spree has not been limited to programming. It has extended to hiring big-name executives. It named the former ESPN chief executive John Skipper as its chairman in 2018.

Since then, it has continued to talk about expansion, even as the losses mounted. Before the coronavirus pandemic sent the world into a head-spinning new reality, DAZN announced plans to expand into 200 countries, with a view to giving a wider audience to its expensively assembled boxing properties. That launch, scheduled for last month, has now been delayed indefinitely, with the company, like others in the sector, coming to terms with the repercussions of the Covid-19 outbreak.

In late March, as the full extent of the coronavirus’s immediate impact on the sports industry started to become clear, Simon Denyer, DAZN’s chief executive, wrote an email to his employees, describing the situation as “the biggest disaster to hit the sports world in 75 years and the biggest challenge our business has ever faced.”

DAZN has not been alone among sports broadcasters to have taken drastic action to limit the damage of the pandemic. BeIN Media Group, the world’s biggest buyer of sports rights, and Sky Italia, the company that shares exclusive rights to Italy’s Serie A soccer league with DAZN, are among a number of other companies that have suspended payments to sports organizers since their events have been suspended.

La Liga President: Many try to justify failures on the field by talking about rest and schedule
Rivaldo on Griezmann: I Don't understand why the world champion and multi-million dollar transfer only comes out at the last minute
The Doctor Sociedad: The Youngster from serious injury. We are not currently considering the option of surgery
Klopp made Liverpool Champions. Now it's your turn: the game Showsport
Daughter of the owner of Valencia: This is our club and we can do whatever we want with it. Don't the fans understand?
Manchester City and Chelsea are Interested in Dean
10 years of Suarez's great save: hand saved Uruguay at the 2010 world Cup
Source https://www.nytimes.com/2020/06/03/sports/soccer/dazn-soccer-goal-tpg.html