DUBLIN, Ohio — Tuesday morning, in his first appearance at a PGA Tour event in five months, Tiger Woods hit a majestic iron shot during a practice round that soared toward an elevated green 250 yards away. When the ball deftly skirted bunkers protecting the putting surface and settled eight feet from the 15th hole, one person among the handful of security officers, volunteers and media members watching Woods clapped his hands.

As the faintest possible applause pierced the stillness at the Muirfield Village Golf Club, home to this week’s Memorial Tournament, Woods seemed uncomfortable, or startled. Accustomed to being surrounded by tens of thousands of cheering admirers, even during practice rounds, Woods awkwardly turned to his one fan, offered a sheepish wave and smiled.

The coronavirus pandemic has meant that spectators are no longer allowed at PGA Tour events, including practice rounds, a situation that has led to quiet, uneasy non-celebrations even as a tournament-clinching final putt falls into the hole. Woods has watched the scenes from afar on TV, but on Tuesday he got his first taste of the changed environment.

He is still trying to adjust.

“I’ve been there when they’re throwing drinks towards the greens and people screaming, high-fiving, people running through bunkers — that’s all gone,” Woods said to reporters after his practice round. “That’s our new reality that we’re facing.”

As Woods spoke, it was as if he was remembering something he took for granted and now wished he had not.

“It’s a very different world out here — not to have the distractions, the noise, the excitement, the energy that the fans bring,” he said. “It’s just a silent and different world.”

He was asked if he could remember the last time he had played a competitive round without a crowd present. Maybe in college at Stanford?

Woods slightly shook his head. He was having none of it, and deadpanned: “Even in college I had a few people following.” He then grinned. 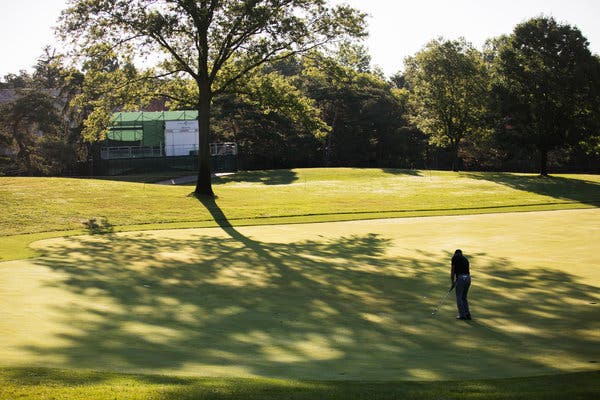 “I’m used to having so many people around me or even touch me — just going from green to tee,” Woods said after a practice round on Tuesday.Credit...Maddie McGarvey for The New York Times

It was perfectly reasonable to expect that Woods might miss his golf kingdom during a five-month tour layoff this year, but who knew he missed his subjects so much?

Even if the course atmosphere on Tuesday was entirely different at Muirfield, Woods was still happy to be back and insisted he was far more fit than he was his last tournament appearance in mid-February, when he finished last among the golfers who made the cut at the Genesis Invitational in Los Angeles. At the time, Woods’s surgically repaired back was stiff and inhibited his swing. By May’s made-for-TV match in Florida, where he and Peyton Manning paired to beat Phil Mickelson and Tom Brady head-to-head, Woods looked both consistently sharp and powerful.

“Physically, I feel so much better than I did then. I’ve been able to train and concentrate on getting back up to speed and back up to tournament speed.”

While the five-month break from elite competitive golf was not expected, Woods said he had learned to adapt to such layoffs since they have become a necessity after his many back reconstructions.

“Unfortunately, over the last few years I’ve been used to taking long breaks and having to build my game to a level where it’s at a tour level at home and play a few tournaments here and there,” he said. “This was a forced break for all of us, but I’m excited to get back into playing again.”

Woods is the last American golfer ranked in the top 30 to return to the tour, and he admitted he weighed whether to come back sooner. (Some top golfers from other countries have not played in the United States because of mandatory quarantine restrictions.) But in the end, it was Woods’s popularity that factored heavily in his decision.

“I’m used to playing with lots of people around me or having lots of people have a direct line to me and that puts not only myself in danger but my friends and family,” he said, adding that he ultimately felt it was safer to remain at home in Florida.

“I’m used to having so many people around me or even touch me — just going from green to tee,” he said. “That’s something that I looked at and said, ‘I’m really not quite comfortable with that whole idea. Let’s see how it plays out first.’”

In returning now, Woods comes back to something of a second home at the Memorial Tournament, a place where he has won five times and he said he felt comfortable.

Until, perhaps, he hit a truly spectacular shot and only one person clapped.

Sanchez received 7.5 million pounds from Manchester United for terminating his contract
Javi Martinez is Interesting to Renn. The club will play in the Champions League
Fonseca Pro 0:2 with Sevilla: Roma deserved to lose
Manchester United are ready to sell Lingard. He has scored in the last two matches
Dzeko Pro 0:2 with Sevilla: Roma never got into the game
Sergio Region: Sevilla are determined to win the Europa League. We want to win everything we can
Well, about the game with Olympiacos: We did a great job. I watched the match Sevilla-Roma, now I will review it
Source https://www.nytimes.com/2020/07/14/sports/golf/tiger-woods-memorial-tournament.html

Emmys: WGA & DGA Have Not Agreed To TV Academy’s Plan To Remove Writing & Directing Categories From Main Telecast On ABC

A 7-year-old boy in Georgia died of Covid-19, the youngest victim in the state

What Matters: I asked for hate mail from teachers and this is what I got

7 Ways to Save Money When Shopping Online

'The Relaxing Zen Garden' is this week's Garden Contest Winner

Trump Orders Government to Buy ‘Essential’ Drugs From US Firms

'Broken' coronavirus tracking system leaves California in the dark: 'We have no idea'

Pete Hamill was a legend, hero and friend