Thunderstorms expected to hit Chicago area by evening, breaking up days of dry heat as above-normal temps hang around 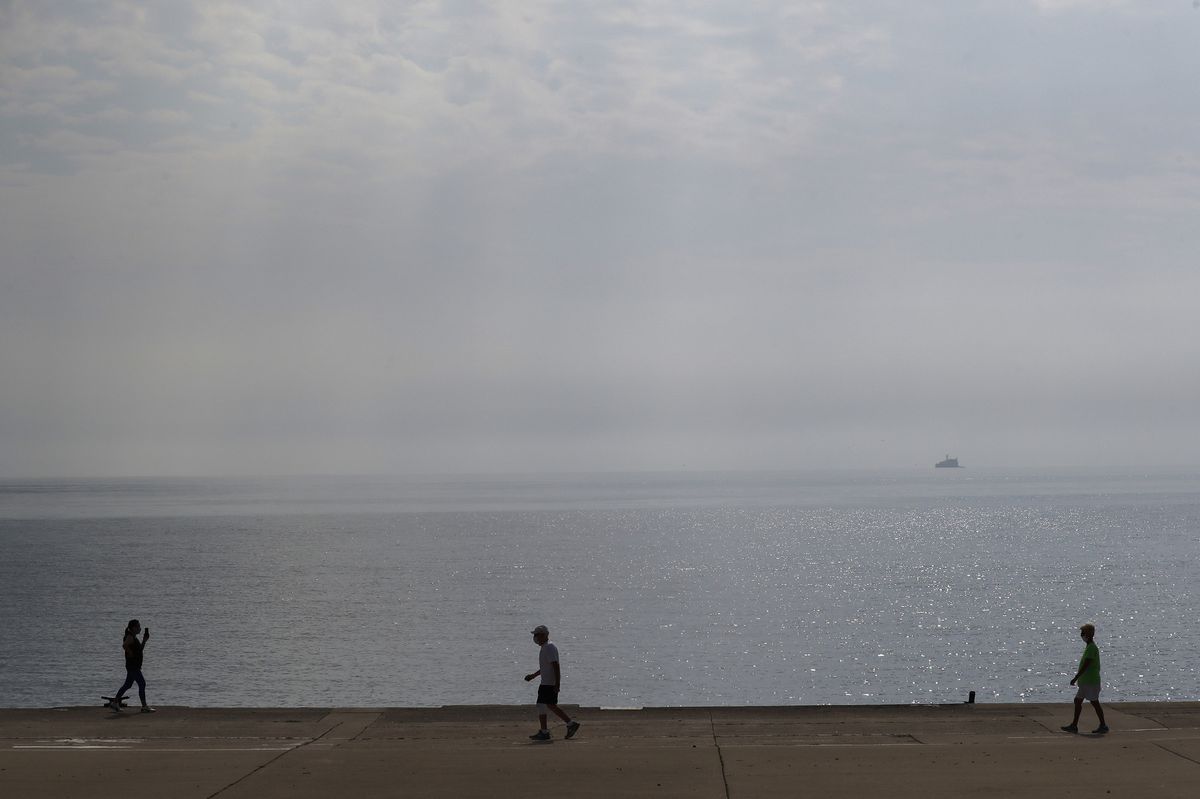 People walk along the lake front near Monroe Harbor in Chicago on a hot and muggy morning, July 8, 2020. (Jose M. Osorio / Chicago Tribune)

Strong thunderstorms with up to 70 mph winds could hit the Chicago area Thursday afternoon, stretching into the evening as temperatures remain in the 80s heading into the weekend.

Temperatures were forecast to remain in the high to mid-90s Thursday, with temperatures slightly cooler by Lake Michigan. The heat index, which measures how it feels when humidity and temperature are combined, was predicted to be near 100 degrees for a fourth straight day.

“It looks like for the most part, most of the Chicago area is in line for some of these showers and storms going into this evening,” said Kevin Birk, a meteorologist with the National Weather Service’s Chicago-area office.

Isolated storms in the Chicago area may start to develop Thursday afternoon, but better thunderstorm chances were expected in the evening, especially after about 5 p.m., Birk said.

The forecast showed severe wind gusts potentially reaching 70 mph by Thursday evening. Predictions showed a chance of brief flash floods or hail, but those would likely be more isolated across the region, Birk said.

“Looks like we could have a potential for higher aerial coverage in the storms this evening,” Birk said. “And also the potential that some of those may be on the strong side, with strong damaging winds possibly across the area.”

This weekend temperatures were forecast to range in the 80s, breaking up days of above-normal temperatures reaching the 90s this week. July has been a hotter than normal month for Chicago, with temperatures about 5 to 10 degrees above average.

“Some places are getting quite dry, so some places need the rain a little bit,” Birk said. “It’s not necessarily a horrible thing that we’re getting the rain, but we could certainly do without the strong winds potentially with some of these storms.”

Birk said the weekend should see mostly dry weather, though there is a chance of thunderstorms late Saturday into early Sunday.

Forecasts showed possibilities of extreme heat returning later next week, Birk said. He advised Chicagoans hoping to go outside to aim for the early morning or late evening, when the weather is generally cooler.

“As we say with a lot of these heat events, just if you go outside, just try to keep yourself out of the sun,” Birk said. “Shaded areas help out. If you don’t have to go out, just stay in the air conditioning, keep yourself cool.

Simeone on relegation from the Champions League: there Are no excuses. We couldn't play the way we wanted to
Nagelsmann about sparring with Simeone, He wants to win even on the way to the locker room. Amazing coach
Hans-Dieter flick: Messi is by far the best player in the world in recent years. It cannot be compared with Levandovsky
Whether he can challenge the appointment of a Dutch referee for the match against city. If the English win, Ajax will be in the Champions League group
Bruno Fernandes: Winning the Europa League will be important for next season. Manchester United wants to win the Premier League
Leipzig midfielder Adams to PSG: we are confident
Keylor Navas may miss the match against Leipzig due to a hip injury
Source https://www.chicagotribune.com/weather/ct-chicago-thunderstorms-weather-070920-20200709-t3nmd7z3qzgkbcoig25ubw6ray-story.html#ed=rss_www.chicagotribune.com/arcio/rss/category/news/

Evacuations ordered in Skyline fire near Corona in Riverside County

What happens when California eviction moratoriums expire? Ask our reporters