She was scrolling through Facebook when she came across the footage, now seen around the world, of a white Minneapolis police officer digging his knee into Floyd’s neck on May 25 as the 46-year-old black man begged for his life and gasped for air for nearly nine minutes.

When Floyd used one of his last breaths to call out for his mother, Johnson wept.

It took her back to the Oakland train platform where her own son, 22-year-old Oscar Grant, was killed by police 11 years ago. Grant, who was lying face-down when he was fatally shot in the back, screamed that he had a 4-year-old daughter. It was one of the first incidents of deadly police force to be captured on video by bystanders, and it set off days of protest. 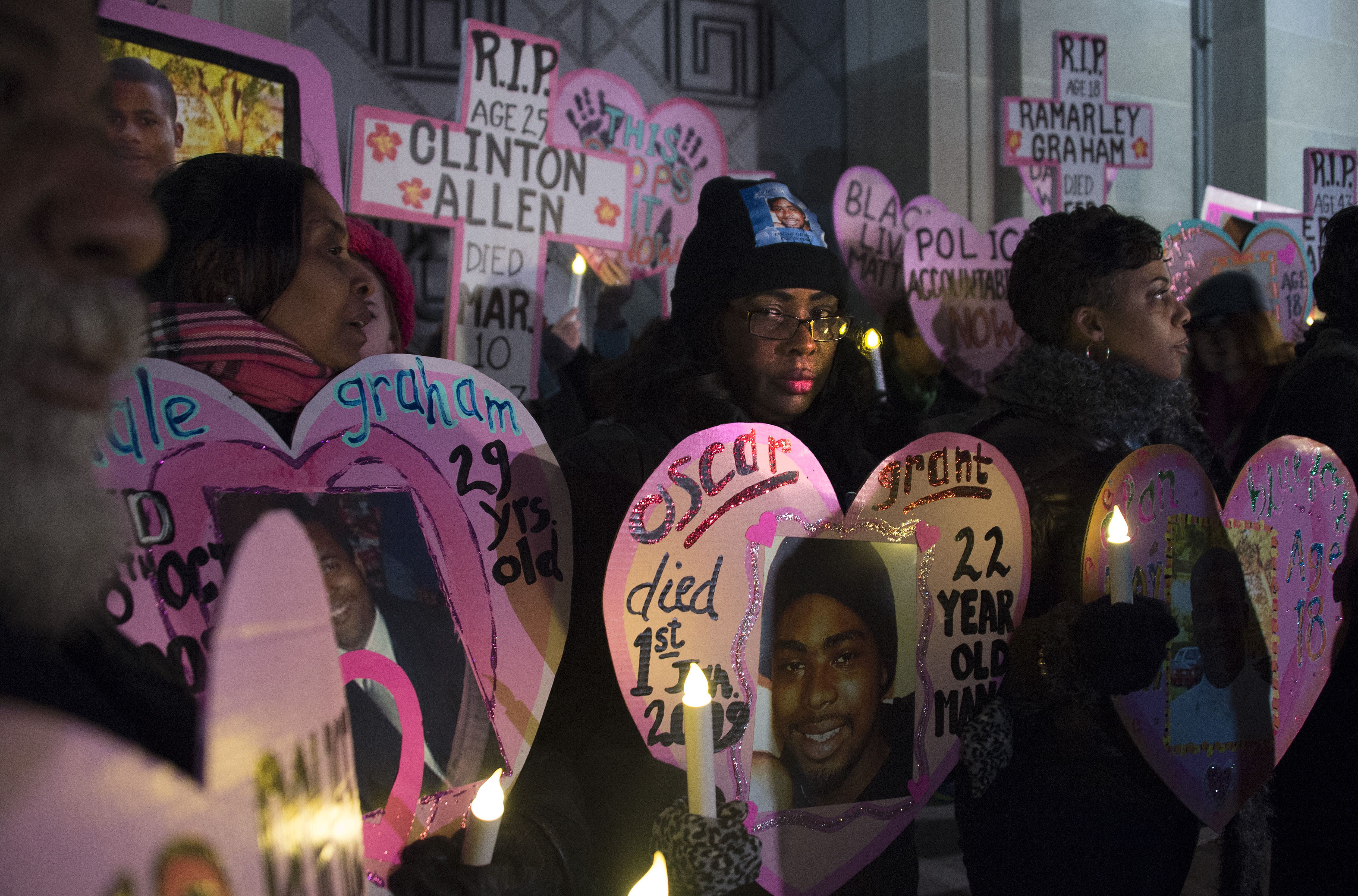 Wanda Johnson (center), whose son Oscar Grant was fatally shot in 2009 by a police officer in Oakland, California, stands with others during a vigil in Washington, D.C., on Dec. 10, 2014.

“It opens up wounds in me,” she adds. “The most painful part is seeing it continue to happen.”

If her son were alive today, Johnson says he would be among the tens of thousands of protesters fanning out in dozens of cities across the nation, demanding justice for Floyd and countless other black men and women killed by law enforcement officers.

“He would say to continue to protest,” Johnson says. “Keep the light on George Floyd.” 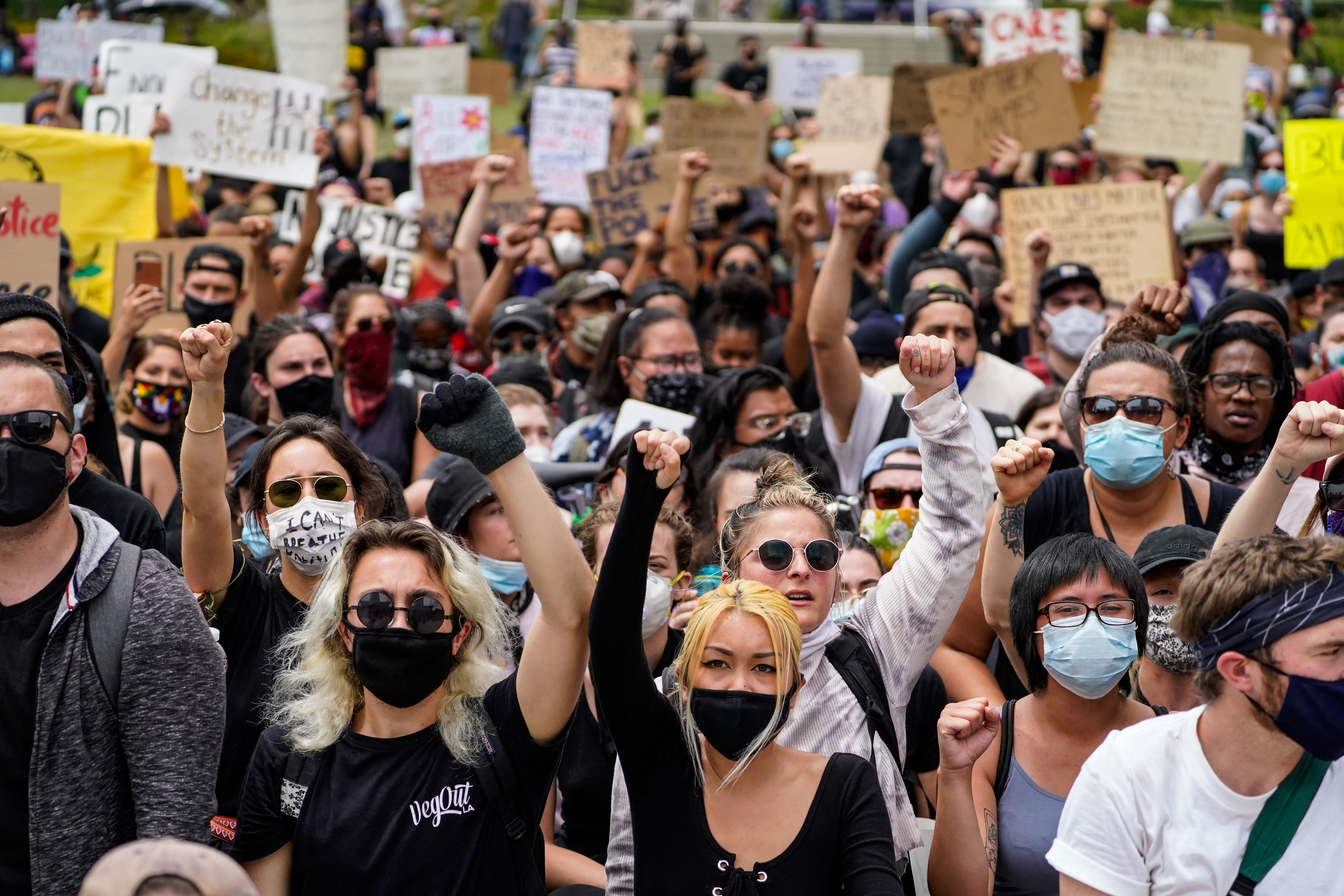 So would Eric Garner, according to his mother Gwen Carr. “I think that he would give them a thumbs-up,” Carr says, “because this is what we need to do to get awareness in America.”

Garner, a 43-year-old father of six, died after Daniel Pantaleo, a white New York City police officer, held him in a chokehold during an attempted arrest in Staten Island, N.Y. on July 17, 2014. Before he died, Garner repeated the words that have become a rally crying for protesters—”I can’t breathe”—11 times. Floyd uttered the same phrase repeatedly as he lay pinned to the ground.

“It was deja vu,” Carr, 70, says of the similarities between the men’s deaths.

“It seemed like they were murdering my son all over again,” says Carr, who can’t bring herself to watch the video of Floyd.

In Minneapolis, Derek Chauvin, the police officer who kneeled on Floyd, was arrested and charged on May 29 with third-degree murder and manslaughter. On Wednesday, prosecutors announced that the murder charge has been elevated to second-degree, and that the three other officers who were on the scene have been charged with aiding and abetting a murder. All four officers have been fired.

Two days after Floyd’s death, Carr contacted his family to give them her sympathies and some advice. “I told them I knew exactly what they were going through and for them to keep up the fight,” she tells TIME. “It’s going to be a long fight.” 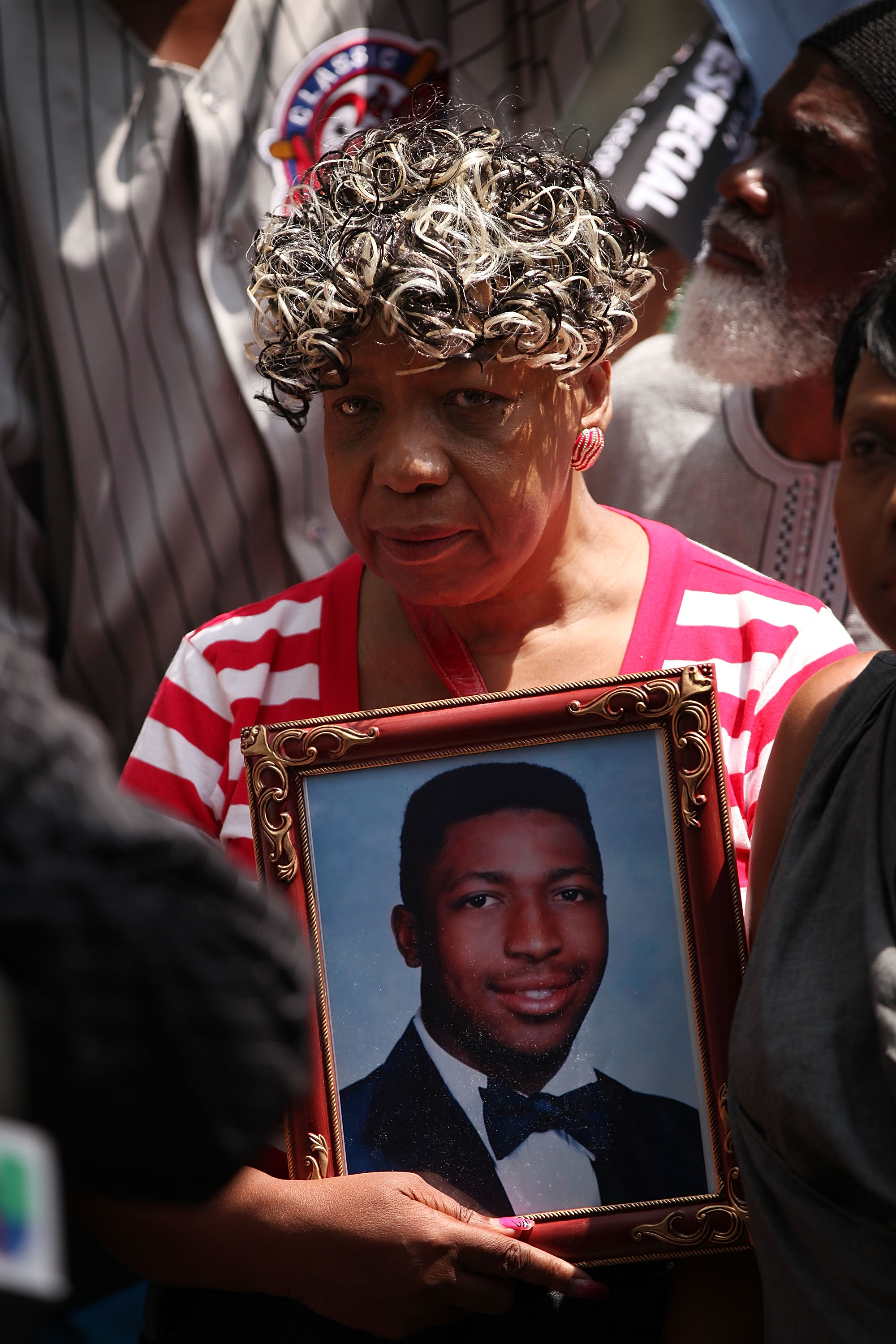 Carr is trying to remain hopeful that Floyd’s family will see justice served in a way she did not. But few instances of civilian deaths at police hands, either accidental or intentional, have ended with cops facing trial.

Law enforcement officers in the U.S. intentionally or accidentally killed more than 7,600 civilians between 2013 and 2019, according to Mapping Police Violence, one of the few groups that tracks deadly police encounters in the absence of a comprehensive national database. Among deaths reported by Mapping Police Violence, an officer was charged with a crime in 1.3% of the cases.

But new research shows there are signs of progress—thanks to activists, experts say.

In 2019, police in 30 of the nation’s largest cities killed 30% fewer people than in 2013, according to Samuel Sinyangwe, a policy analyst who co-founded Mapping Police Violence, an on-line non-profit site, which compiles data from news articles, police reports, social media and other sources.

Sinyangwe says that’s likely due to pressures brought on by protesters, who helped lead many cities to change use-of-force policies to match recommendations from the Justice Department. He says police shootings fell last year in Philadelphia, San Francisco, Baltimore, Chicago, Denver, Los Angeles, Phoenix and Dallas after reforms were implemented.

While there’s a feeling across the nation that nothing has changed when it comes to police brutality, Sinyangwe says there’s hope if activists keep the movement’s momentum going and continue pressuring policymakers and leaders.

“Their work is saving lives. Their work is making a difference in not only bringing attention to this issue but leading to concrete changes,” he says. “That’s really important for people to know in this moment.” 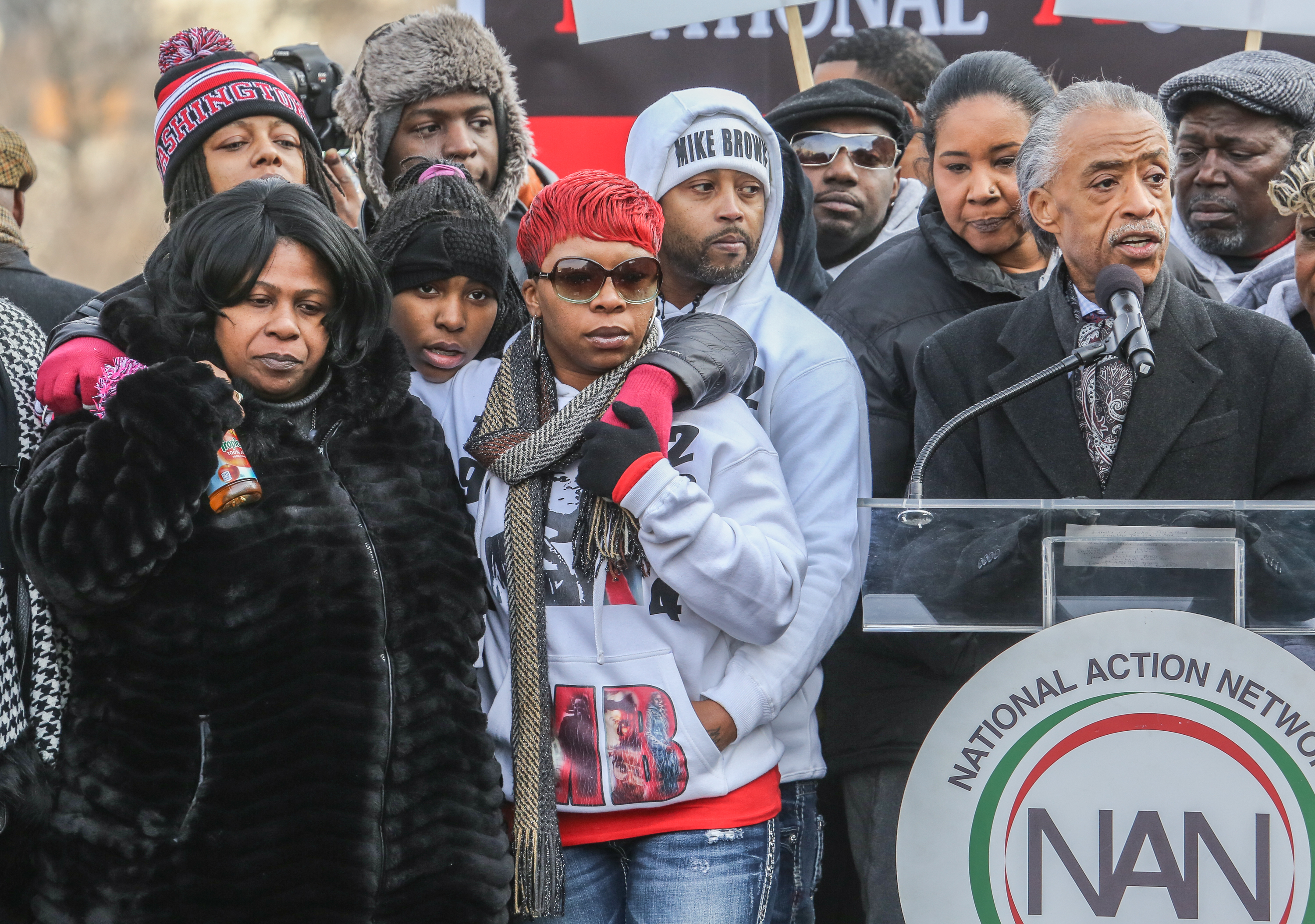 Still, improvements have been slow. While police killings dropped in big cities, they increased in more suburban and rural areas, Sinyangwe says, and the number of people killed by police has remained relatively steady nationwide since 2013.

There are also larger hurdles on the federal level. In the last few years, President Donald Trump’s administration has rolled back several police reforms implemented by President Barack Obama’s administration, making it harder to intervene with problematic police forces. During recent news conferences, Trump called himself the “president of law and order” and threatened military action and violence if rioting and looting continued in cities.

Meanwhile, parents like Samaria Rice, whose 12-year-old son Tamir was killed by Cleveland police in 2014, are numb as they wait for the day they don’t have to turn on the TV and see another senseless death.

“Every time I see it, it destroys me,” Rice says.

On June 25, Tamir would have turned 18. Rice is making plans to celebrate the bittersweet milestone, as unrest roils the nation.

“The hardest thing for me is I can’t see my son develop as a young man,” Rice says. “It’s painful for me to see nothing has changed in this country. Nothing.”

Manchester United is ready to sell Alexis, Lingard, Smalling, Dalot, Jones and Rojo
Frank Lampard: I expect more from Chelsea, but now the result is most important
Atalanta does not lose 15 matches in a row – 13 wins and 2 draws
Lorient threw one newcomer off a plane and sent another under the water-all for the sake of presentations on social networks
Pasalic scored a hat-trick in the match against Brescia. Atalanta smashes the opponent 6:1
Rummenigge on Ribery: Hennessy was like a second father to him, and I was like a second mother
Giroud has scored 6 goals in his last 10 Premier League games – the same number as in 51 games before
Source https://time.com/5847533/mothers-george-floyd-protests/?utm_source=feedburner&utm_medium=feed&utm_campaign=Feed%3A+time%2Ftopstories+%28TIME%3A+Top+Stories%29

Canada, US and Mexico poised to extend border restrictions

Dad and teen stepson kill each other in Far Rockaway shooting: NYPD

Is Jana Kramer Joining The Real Housewives of Beverly Hills for Season 11?

A Teacher Who Contracted COVID-19 Cautions Against In-Person Schooling