The Rise of Child Labor in the Coronavirus Pandemic

The coronavirus pandemic has forced millions of the world’s poorest children to halt their educations and go to work to help support their families, as schools have closed and parents’ incomes have fallen or vanished.

The children do work that is arduous, dirty and often dangerous: hauling bricks or gravel, scavenging for recyclables, begging or chopping weeds on plantations. Much of their employment is illegal.

It is a catastrophic shift for some of the world’s most vulnerable people, undoing years of gains for education and against child labor, and undermining their prospects of climbing out of poverty. Countless promising students have had their educations cut short, and it remains unclear when schools will reopen. But even when they do, many of the children are unlikely to go back to the classroom.

Here are some key findings of a New York Times report on conditions for these poor children.

The work is often dangerous and illegal.

Former pupils have been forced into heavy manual labor on construction or demolition sites, picking through garbage, doing sex work, mining for sand or working in factories making cigarettes or fireworks.

The jobs carry risks of injury, or worse, and the hazards are especially acute for children — more so when they lack protective equipment, or even shoes. In the Indian city of Tumakuru, an 11-year-old boy, Rahul, set out barefoot with his father on a recent morning to scavenge for recyclables at a waste dump.

India has the world’s largest school-age population and the fastest-growing number of coronavirus cases. The country’s laws prohibit anyone under 14 from working in most circumstances, but its poverty means that it had a large market in illegal child labor even before the pandemic.

With the problem growing and the government disrupted by the virus, enforcement is even less able to keep up.

The rise in child labor also compounds other threats to children resulting from the global recession. Hunger now threatens far more people in many parts of the world than it did a year ago. There have also been increases in forced marriages, teenage pregnancy and child trafficking.

Millions of children are unlikely to return to school. 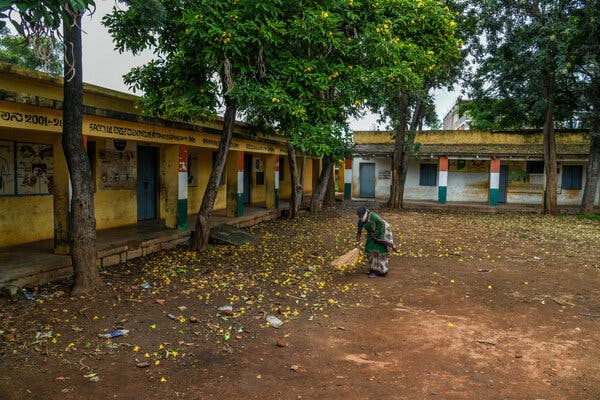 A closed school on the outskirts of Tumker, in southern India. For many children, an extended inability to attend classes will become permanent.Credit...Atul Loke for The New York Times

The longer children stay out of school, and the more desperate their family circumstances, the less likely they are to go back. The United Nations estimates that 24 million children have dropped out for good because of the pandemic.

With school closings around the world affecting well over one billion children, many of them can continue to learn online or at home. But hundreds of millions come from the poorest families, with no access to computers, the internet or tutors.

It grows harder to return to school as the children age and their families become dependent on their earnings — and no one knows yet if that dependence will last for months or years.

“I fear that even if school reopens, I will have to keep doing this, because of the family’s debt,” said Mumtaz, a 12-year-old boy in Bihar State in India, who now works carrying heavy loads of gravel.

Families are desperate, and wages are falling.

Reluctant parents say the only alternative to putting their children to work is for the families to go hungry.

With hundreds of millions of people worldwide out of work, the law of supply and demand makes for some cruel math. Struggling businesses take advantage of the glut of labor, driving down wages for those who still have jobs.

A labor contractor in West Bengal in India said parents had asked him to find work for children as young as 8, who looked “like they were being prepared to be thrown into a fire.”

Decades of progress are threatened.

Around the world, poverty had been declining for decades, particularly in Asia, allowing more and more children to remain in school. The pandemic has reversed those trends.

Many of the students forced from the classroom and into work were doing well academically, fueling dreams of better futures. Those dreams are now in peril.

Rahul, the 11-year-old boy in Tumakuru, wants to be a doctor, and his teacher says he is bright enough to attain that goal. But the longer he is out of school, the more remote it becomes.

The focus in India and many other countries has been on reopening businesses to restart the economy, but children’s advocates say it is shortsighted to open bars, restaurants and transit systems while keeping schools closed.

Arsenal will exclude Ozil and Sokratis from the Premier League bid
Bartomeu will miss the match against Ferencvaros due to a relative's covid. Barca President wants to get to the game with Real Madrid
Liverpool and Manchester United are among the clubs in talks to create a European Premier League
Thibaut Courtois: real want to win the Champions League and La Liga
Tiago and Matip didn't train with Liverpool today. They will probably not play Ajax
Griezmann will not return to Atletico from Barcelona
Miranchuk was included in Atalanta's bid for the Champions League match with Midtjylland
Source https://www.nytimes.com/2020/09/27/world/asia/coronavirus-education-child-labor.html

Workers being laid off twice as COVID ripples through economy

Did Bayern Complete Its Rebuild While No One Noticed?

CONCEIVED, STRIVED, CONQUERED: A boy from a town to the crown

It’s Google’s World. We Just Live In It.

Jeffrey Toobin of New Yorker Is Suspended After Zoom Incident

Roll over: LG's smart TV costs more than a BMW; here's why

‘New York, California, and Illinois, your states are way too highly taxed, big crime, people fleeing, and just about every other problem you can have.’ When Trump talks about Chicago — and the state of Illinois — we track it.

NASA's OSIRIS-REx to land on asteroid Bennu; why is it a huge deal for humanity