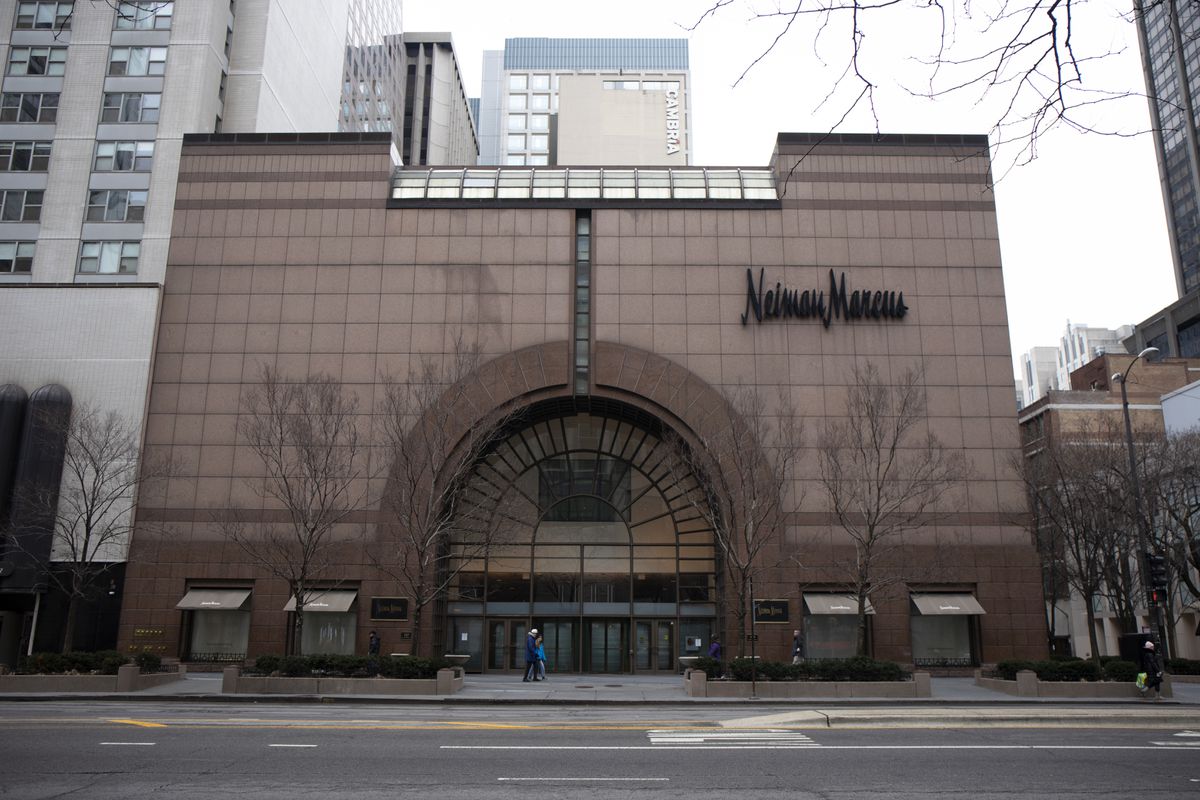 A person runs in front of the boarded up Neiman Marcus store on Michigan Ave. on March 23, 2020, in Chicago. (Raquel Zaldivar/Chicago Tribune)

Many of America’s storied retailers already were facing big challenges, but the COVID-19 pandemic has hastened difficult decisions that will mean job losses and empty storefronts in the Chicago area and elsewhere.

Stay-at-home orders, layoffs and furloughs dented consumer spending that is only now coming back in fits and starts. U.S. retail and food service sales rose an estimated 17.7% in May compared with April, according to the U.S. Census Bureau. Still, many consumers are dealing with the economic fallout of the pandemic and worries about venturing into stores, especially as an increase in new COVID-19 cases nationwide has led some states to slow their reopening plans.

Chains with deep roots are filing bankruptcy. Others have sped up plans to close underperforming stores. And unlike in past retail reckonings, the list of tenants that might be interested in filling those spaces, like medical offices and fitness facilities, likely has shrunk, given economic concerns as well as social-distancing rules.

Department stores have struggled for decades as the idea of a one-stop shop at the mall fell out of favor with consumers, and though several companies had been making progress on turnaround efforts, the pandemic “doubled down on the pace of the decline,” said Neil Saunders, managing director at GlobalData Retail.

J.C. Penney, which filed for Chapter 11 bankruptcy protection in May, has announced plans to close 154 of its roughly 850 stores, including locations in Bourbonnais, Carbondale, Freeport, and Mt. Vernon. The company warned it expects to shutter more locations in the coming weeks.

Even before the pandemic, the company had too many stores and needed stronger merchandise that would keep customers coming back, said Craig Johnson, president of retail consultancy Customer Growth Partners.

COVID-19 was “the straw that broke the camel’s back,” he said. 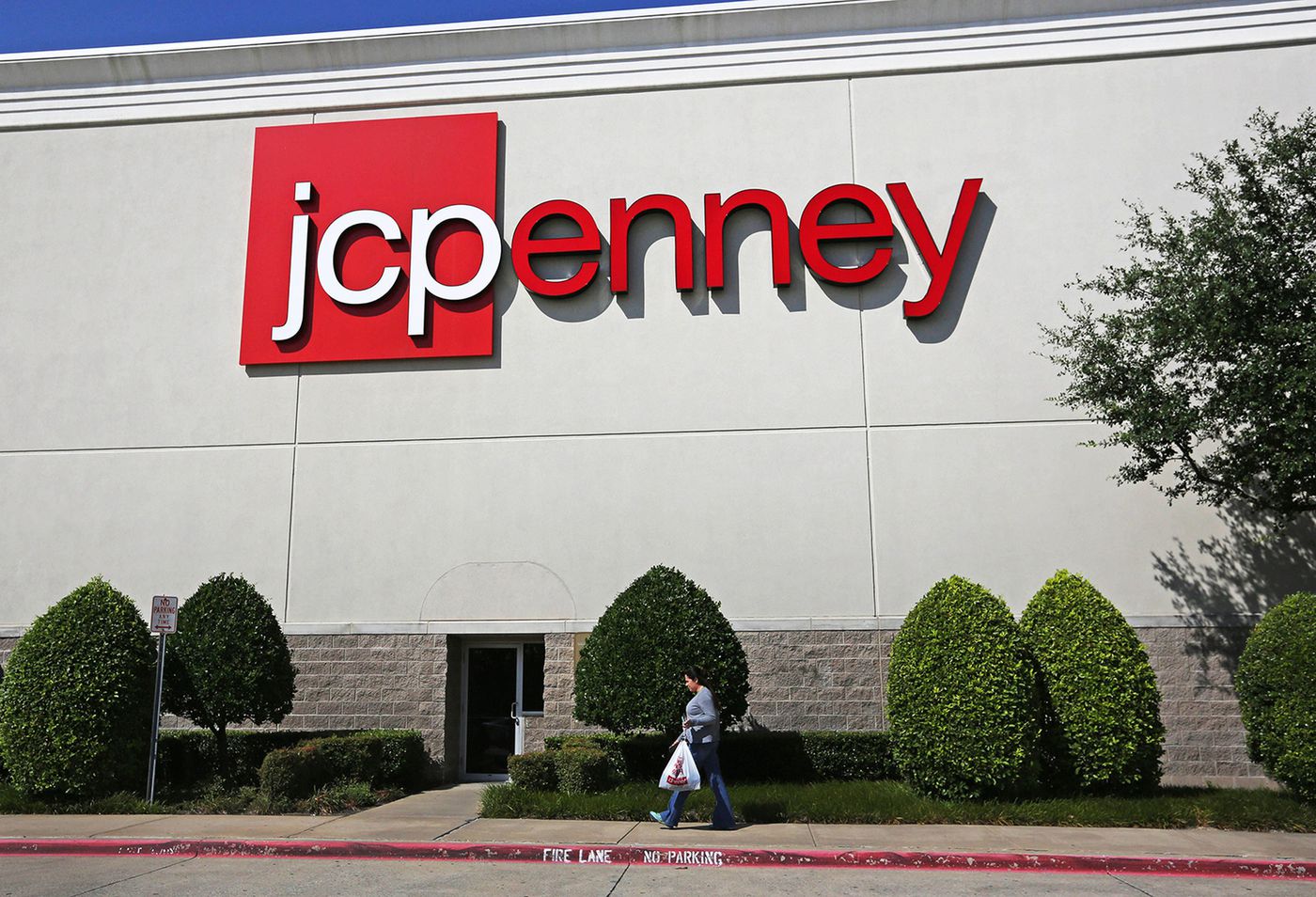 Neiman Marcus, which filed for Chapter 11 bankruptcy in May, simply had too much debt, Saunders said. A smaller number of stores and a clear focus on luxury shoppers should leave it in a better position if it can restructure, he said.

Meanwhile, Macy’s announced plans in late June to cut 3,900 corporate and management jobs. It also will reduce the number of employees in its stores, supply chain and customer support network while sales recover. Macy’s was planning to shrink even before the pandemic forced U.S. stores to close: In February, the company said it would close 125 stores, or one-fifth of its locations.

“While we continue to see challenges ahead, we’ve taken the necessary actions to stabilize our business and give us financial flexibility,” CEO Jeff Gennette said when the retailer reported first-quarter results earlier this month.

Nordstrom, which announced plans to close 16 department stores and its three Jeffrey boutiques in May, is laying off thousands of workers, according to the Seattle Times. None of the closing stores are in Illinois.

The company declined to confirm the number of employees affected but said in an email that the changes “enable us to respond to current economic conditions” and changes in the way customers shop.

Specialty apparel retailers are facing some of the same challenges as department stores, including sizeable debts, lost revenue from stores forced to close during the pandemic and questions about how long shoppers will put off nonessential spending or remain wary of heading back to malls. Chicago-area malls have reopened, though certain stores and restaurants may still be temporarily closed.

Spending at bricks-and-mortar stores is expected to bounce back. About 45% of people said their spending in stores will return to normal as soon as COVID-19-related restrictions lift, according to a June survey by 451 Research, part of S&P Global Market Intelligence. Nearly 40% expected their in-store spending to return to normal within three months. 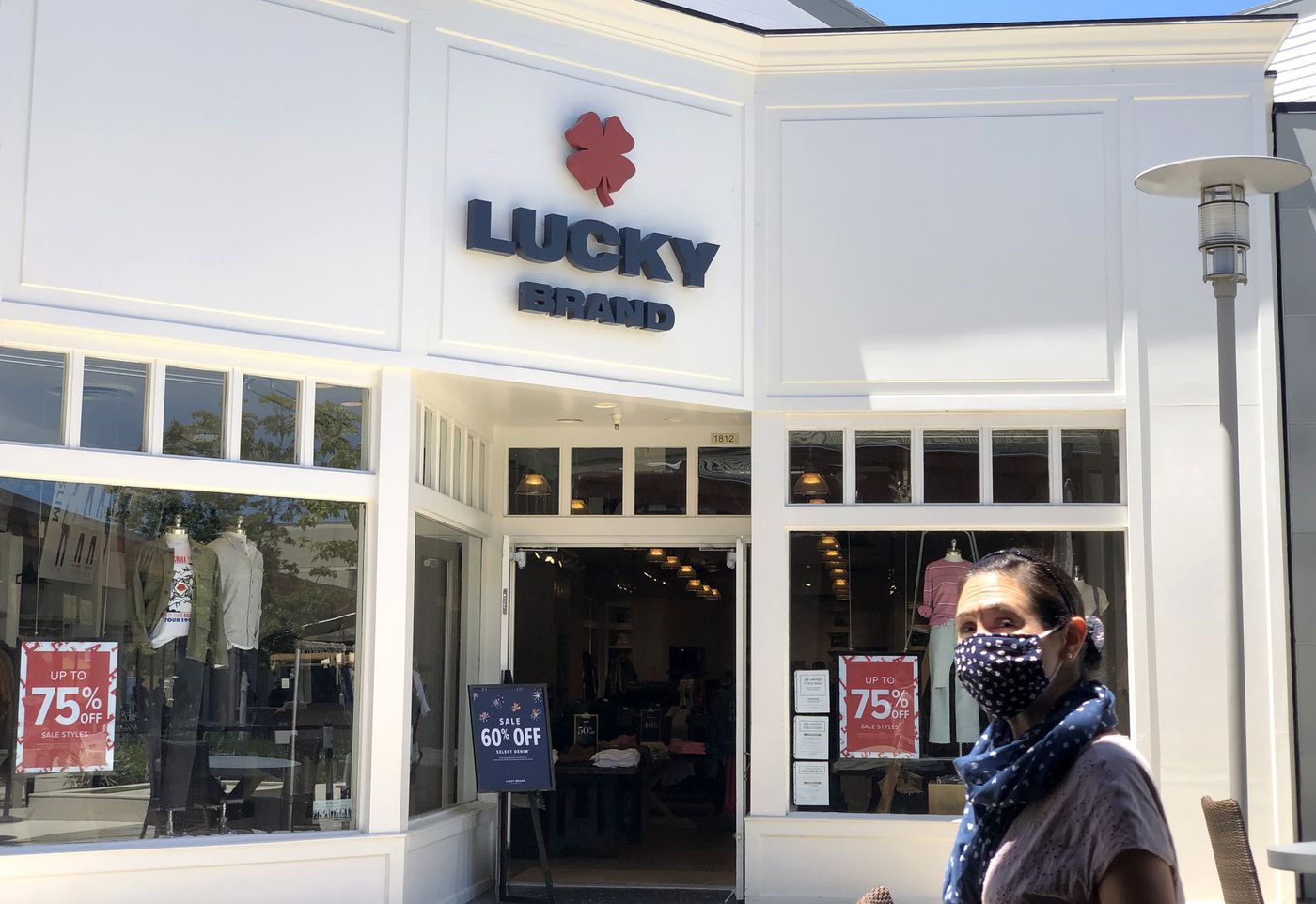 Denim retailer Lucky Brand Dungarees filed for bankruptcy July 3 with plans to close 13 of its stores, including its Michigan Avenue location. The Los Angeles-based retailer operates more than 200 U.S. stores, mostly in shopping malls, and plans to retain most of them through a proposed sale, according to bankruptcy court filings.

On Wednesday, Manhattan-based men’s clothier Brooks Brothers filed for bankruptcy and will permanently close more than a quarter of its 200 stores, including a Loop location in the Rookery on LaSalle Street. The 200-year-old seller of high-end suits is known for dressing almost every U.S. president, including Abraham Lincoln.

Formal business attire and other office-friendly clothing was in decline even before the pandemic. Now that people are going into the office less often and attending fewer social events that require getting dressed up, there are even fewer reasons to stock closets with more than jeans and yoga pants.

J. Crew, known for its tailored “smart casual” clothing, filed for Chapter 11 bankruptcy in May. J. Crew’s Madewell brand was a bright spot for the retailer, but the company was also laden with “crippling debt,” Saunders said. 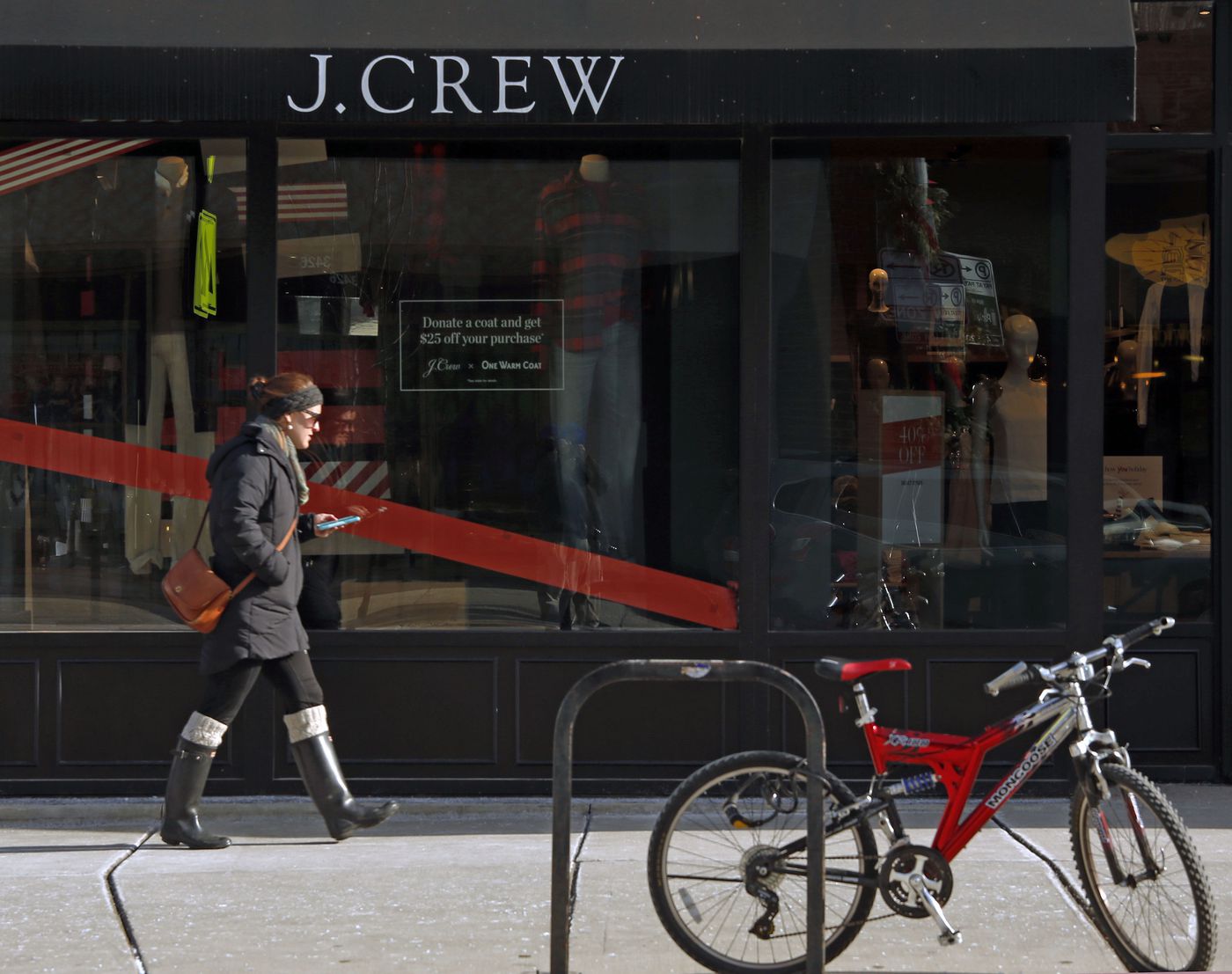 Women’s apparel retailer J. Jill and apparel and accessories chain Francesca’s both issued regulatory filings warning the effects of the pandemic raise doubts about whether the companies can stay in business. J. Jill also said it reached forbearance agreements with lenders that give it until July 16 to comply with some terms of the loans.

Ascena Retail Group, parent company of Ann Taylor and Lane Bryant, also known for more tailored styles, is preparing to file for bankruptcy as soon as this week and plans to close 1,200 stores, Bloomberg reported Tuesday.

The Children’s Place plans to close 300 stores by the end of next year and wants stores in malls to account for less than 25% of its revenue by 2022, CEO Jane Elfers said in a news release last month.

The pandemic was especially tough for companies that were slower to invest in online shopping or saddled with too many stores, regardless of industry, said Sheryl Kingstone, head of customer experience and commerce at 451 Research, part of S&P Global Market Intelligence.

Discount retailer Tuesday Morning said it plans to close 230 stores, or about a third of its locations, after filing for Chapter 11 bankruptcy in May.

Closing sales are underway at stores in Naperville, Wheaton, Downers Grove and Merrillville, Indiana, according to the company’s website. That leaves five Chicago-area stores.

Discount chains like TJ Maxx and Ross have been doing well with consumers who are budget-conscious or just like hunting for a good bargain, but Tuesday Morning’s stores can feel too “haphazard,” Saunders said. 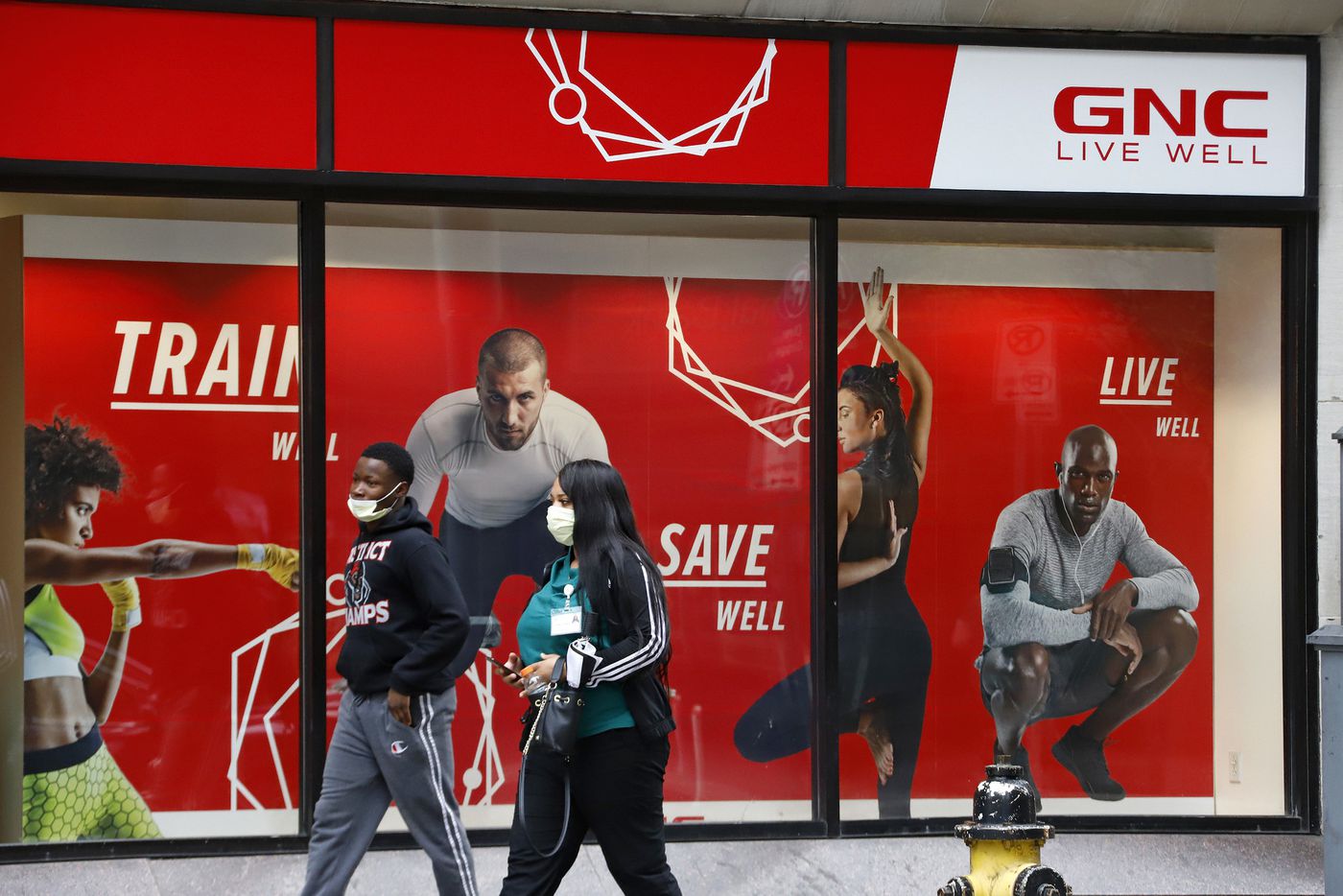 A couple walks past a GNC store at the company's world headquarters in downtown Pittsburgh on April 29, 2020. Health and wellness company GNC Holdings has filed for Chapter 11 bankruptcy protection and is looking to close as many as 1,200 stores. (Gene J. Puskar / AP)

GNC said it plans to close as many as 1,200 of its 5,200 U.S. stores, some of which are inside Rite Aid stores. That includes 13 Illinois locations, including stores in Chicago, Orland Park, Lincolnwood, Wilmette and Bannockburn.

The company was working to refinance debt earlier this year but was not able to complete a deal after the pandemic hit and 40% of its stores were forced to close as nonessential businesses, chief financial officer Tricia Tolivar said in a filing with the bankruptcy court. .

Meanwhile, AT&T is closing 250 retail locations and laying off thousands of workers, according to Axios. A spokesman declined to confirm the number of closing stores or employees affected. 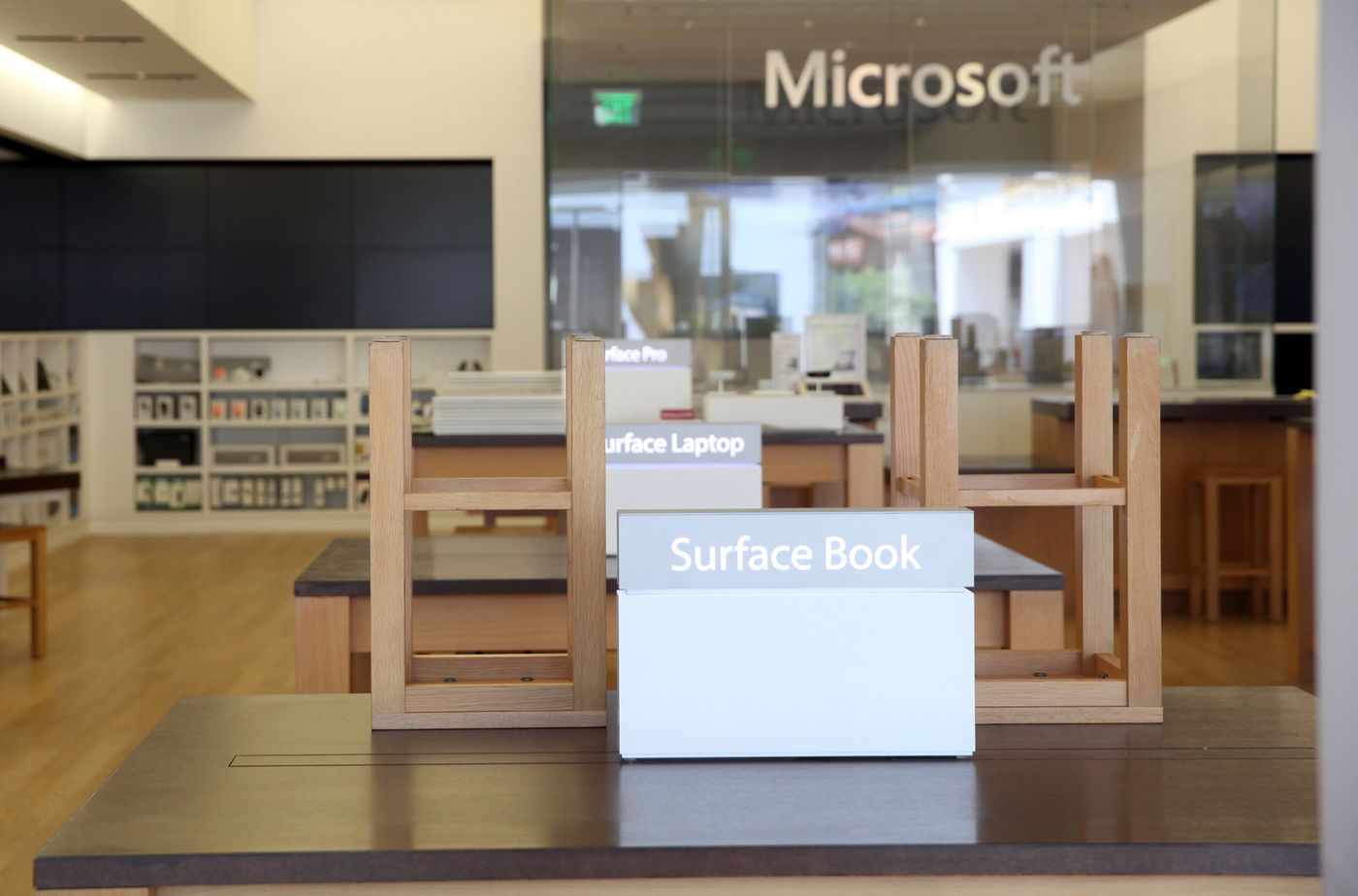 The showroom at Microsoft store sits empty on June 26, 2020, in Corte Madera, California. Microsoft announced it plans to close all of its 83 brick-and-mortar stores and switch to an online-only platform. (Justin Sullivan / Getty Images)

Microsoft also announced plans last month to close all its physical stores, including two Illinois locations at Oakbrook Center and Woodfield Mall. The company said it plans to focus on online sales, though it will keep Microsoft Experience Centers in London, New York City, Sydney, and near its Redmond, Washington, headquarters.

When Microsoft started opening mall stores, it appeared to be trying to copy Apple’s playbook, but never attracted the crowds who would come to check out the latest iPhone, Johnson said.

Immobile about Newcastle: They called my agent when the sheikhs bought the club
Liverpool are confident they will sign Tiago. The player has already agreed a contract and is pressing Bayern
Our judging = fear and helplessness. Instead of Kaloshin and Kashshai – a soulless system that does not care
Lothar Matteus: Messi is not enough to pass such a Bayern. I am not afraid of Barca
Thomas Tuchel: Mbappe will play Atalanta if nothing happens
Lille acquired 20-year-old forward David from Gent. He is the best sniper of the CONCACAF Cup
Rummenigge on Tiago's departure: If someone offers a fair amount for him, we will work
Source https://www.chicagotribune.com/coronavirus/ct-coronavirus-illinois-retail-impact-bankruptcies-20200708-tnuflm5mgbdvnjvrfi3zs4ge2m-story.html#ed=rss_www.chicagotribune.com/arcio/rss/category/news/

In Historic Pick, Joe Biden Taps Kamala Harris To Be His Running Mate