The roadwork notices were tied to trees and signposts on a Friday along one of the world’s best-known streets. The following Monday, crews arrived on Central Park West and began setting up a protected bike lane, which eliminated about 200 parking spaces in an almost mile-long stretch.

The next day, representatives for a luxury Central Park West condo went to court to block the bike lane, opening another front in the increasingly pitched battle between bicyclists and motorists for precious space in the nation’s largest city.

In a city with gridlocked streets, creaky public transit and where cycling deaths are on the rise, the opposing lines are clear.

Bicycle advocates and city officials want to make the roads more bike friendly — and safer — at a time when the popularity of urban biking is soaring. On the other side are those who accuse the city of becoming ever more hostile toward drivers.

Opponents object to “road diets” that narrow traffic lanes to make room for bike lanes or remove traffic lanes altogether. Even the actress and television personality Whoopi Goldberg complained about the push to build bike lanes when Mayor Bill de Blasio was a guest on the talk show “The View” several months ago.

New York and other cities are rethinking the monopoly on streets the automobile has long enjoyed. New York is the first American city to adopt a plan for congestion pricing — starting in 2021 motorists will have to pay to drive into the busiest parts of Manhattan — as a way to coax drivers out of their cars. 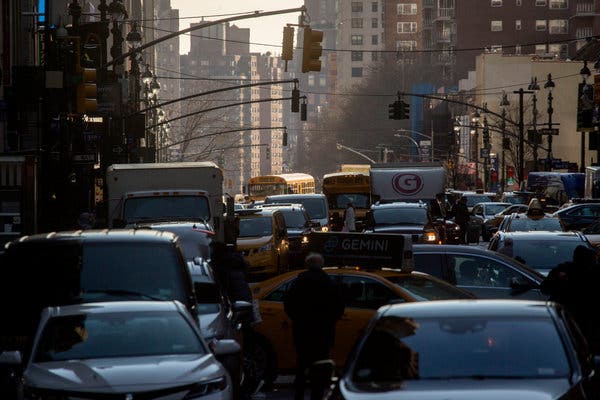 The city’s effort to carve out more street space for cyclists has prompted a backlash from drivers. CreditDave Sanders for The New York Times

“It’s only a little more than 100 years ago, with the rise of the automobile, that we started to give over to this one mode of transportation,” said Tom Wright, the president of the Regional Plan Association, a New York-based urban research and policy group.

“What we’re seeing now is a counterrevolution” that involves “recognizing that streets and sidewalks are part of the public domain.”

That has turned streets and sidewalks into what he called “contested terrain,” especially as more people turn to biking to commute.

More than 75 percent of street space in New York is dedicated to moving cars or storing them, in the form of parking spaces, according to Transportation Alternatives, a cycling and pedestrian advocacy group.

“The rest is pedestrians on sidewalks, relegated to the margins, and the occasional bike lane,” said Marco Conner, the organization’s co-deputy director. “With that, you basically have New Yorkers who expect that a free parking space is almost a right, that you’re supposed to have it and that any infringement on that is infringing on your rights.”

“So bicyclists are viewed as an infringement, ” he added.

Dana Lerner, the mother of a 9-year-old boy who was killed by a motorist in 2014, spoke at a rally to protest the lawsuit seeking to stop the bike lane on Central Park West.CreditMichelle V. Agins/The New York Times

In northern Manhattan last year, the city installed bike lanes along Dyckman Street only to remove them after business owners complained. When Mr. de Blasio was asked about it, he said, “It’s a very big government, and sometimes things happen that do not reflect my will.” He said the removal plan “should have been brought to my desk.”

Following a jump in cycling deaths , the city reversed course and is planning to reinstall the lanes.

In other boroughs, bike lanes have been met with open hostility.

A community board member in Queens, Kim Ohanian, was recorded on video in May calling the mayor’s signature traffic safety program, Vision Zero, “a joke” during a meeting about bike lanes.

After saying that she had seen people cross the street while they were talking on their cellphones, she added, “You know what? They deserve to get run over.” (Ms. Ohanian did not return calls seeking comment).

The fourth and final mile of a planned lane in Forest Hills, Queens, has been delayed because of community opposition, while a protected lane in Sunnyside, Queens, was defaced with profane graffiti.

And in the Bronx, business owners went to court to stop a bike lane plan along a major street in Morris Park.

“If we were Chicago after the fire where we would build and plan accordingly, there would be sufficient space,” said Mark Gjonaj, a City Council member who is among the plaintiffs in the Morris Park case, referencing the 1871 inferno that burned down Chicago . “That would be a perfect world. New York City isn’t that perfect world where we can just increase infrastructure to meet the demands. The city’s been built already, and whatever changes we’re making are taking away from Peter to pay Paul.”

Other cities that have tried to make room for bikes have also faced a backlash.

In car-centric Los Angeles, anger over road diets prompted a recall campaign against a City Council member who supported replacing a lane traffic in each direction with protected bike lanes along an unsafe high-speed corridor. The recall campaign failed.

Detroit, the city that gave the world the automobile, has 80.8 miles of roads with bike lanes. But Todd Scott, the executive director of the Detroit Greenways Coalition, said there had been pushback from motorists.

“What motorists almost always want is another lane so they can go faster,” he said.

In New York, officials say bike lanes reduce accidents, making roads safer for everyone — drivers, bicyclists and pedestrians. But so far this year, 19 bike riders have died in accidents, the latest a 52-year-old man killed by a sport-utility vehicle in Brooklyn, surpassing the total for all of last year.

Nowhere is the battle over streets more contested than on Central Park West, where the city is widening and repositioning a bike lane. That prompted the lawsuit by the condominium board of the storied Art Deco apartment building at 25 Central Park West, where the owners include the Amazon founder Jeff Bezos and where a nine-room apartment is on the market for $9.995 million.

The city’s transportation commissioner, Polly Trottenberg, said the goal had been to complete much of the work before the first anniversary of an Aug. 10 accident a few blocks away. A truck hit a 23-year-old visitor from Australia who had been biking. The victim, Madison Jane Lyden, had veered out of the bike lane — into the traffic lane — to avoid a livery cab that had cut her off.

It was “not a happy anniversary,” Ms. Trottenberg said, adding, “We want to show we’ve made real progress.”

A “ghost bike’’ on Central Park West, in remembrance of cyclists killed on city streets. CreditMisha Friedman for The New York Times

Space was an issue. The city could not shrink the sidewalk or do away with the subway grates, so something had to go: Parking spaces for about 200 cars along Central Park West, going north from West 62nd Street. Next year the city plans to extend the bike lane the rest of the way to the northern end of Central Park — and take away another 200 parking spaces.

In its lawsuit, the condo board argued that “the push for more bike lanes has stripped the City of prime real estate’’ and accused officials of favoring “a tiny minority of citizens by handing over vast swathes of the city’s public space.”

More specifically, the board said the city failed to conduct environmental reviews. But a spokesman for the Transportation Department said such studies are not necessary for traffic-control projects like bike lanes.

Bicycle advocates held a rally outside the building, saying opponents valued parking spaces over the lives of cyclists.

“It makes it worse that someone was killed almost on their doorstep,” Mr. Conner, of Transportation Alternatives, said, referring to Ms. Lyden.

Paul Millman, the treasurer of the board, would not comment when reached by telephone. A call to Bonnie Eisler, another resident of the building who was also listed as a plaintiff, was answered by a man who said “We’re not commenting on anything,” and hung up.

One resident of the building disagreed with the board’s action. “The optics are terrible,” said Robert Brandes Gratz, who has lived in the building since 1972. “No doubt we look like an overprivileged, insensitive group of people.”

As the subway’s problems have worsened and buses and cars have struggled on slow-moving streets, many New Yorkers have turned to cycling as a way to get around.

Cycling has become more popular despite new dangers on the streets, in part from a surge in truck traffic making e-commerce deliveries. In New York, cycling deaths have not followed a predictable pattern, going from a high of 24 in 2017 to a low of 10 last year.

But given the deaths so far this year, Mr. de Blasio acknowledged that the city was facing an “emergency” and announced that the city would accelerate the number of bike lanes it would create.

“The way I like to talk about what we’re doing is we’re trying to provide people with options,” Ms. Trottenberg, the transportation commissioner, said. “Cycling has grown pretty exponentially in the last 20 years. If you lived in New York back in the day, not that many people were cycling and there wasn’t demand for cycling infrastructure. Now there is. And there is demand for safer streets in general.”

Malaysia’s Mahathir says he has support to return as PM

Harvey Weinstein 'not giving up on life,' according to spokesman