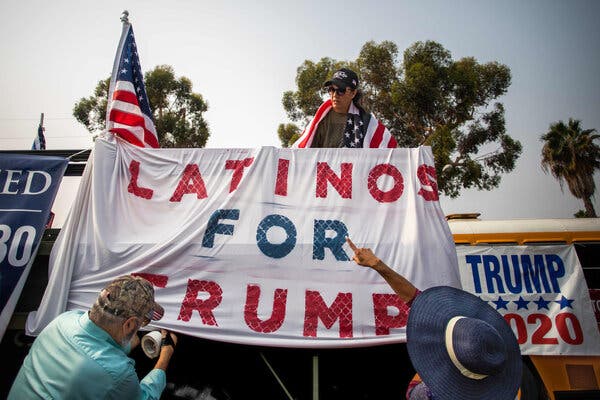 President Trump famously won the 2016 election thanks to a surge of support from white voters. This year, Trump is trailing Joe Biden largely because some of those voters have swung back to the Democrats. In several recent swing-state polls, Biden is even winning a narrow majority of white voters.

But Biden is not quite running away with the election. He leads by six percentage points in The Times’s national polling average, down from almost 10 points earlier this summer.

What’s going on? In large part, Biden continues to struggle with Hispanic voters. Trump, despite making repeated appeals to white nationalism and castigating immigrants, has a chance to do better among Hispanic voters than he did in 2016, and win more than a third of them, even as he does worse with white voters.

One possible explanation — a worrisome one for Democrats in the long run — is that Hispanics are following a path not so different from earlier European immigrant groups, like Italian and Irish Americans. As they assimilated, they became less reliably Democratic. To oversimplify, they voted for F.D.R. and then for Reagan.

Ross Douthat, a Times columnist, argues that Trump’s relative strength among Hispanic Americans is a sign that Democrats are misreading the politics of race. Liberals often draw a bright line between whites and people of color (as the acronym BIPOC — for Black, Indigenous and people of color — suggests). But this binary breakdown doesn’t reflect reality, Ross argues.

For starters, about 53 percent of Latinos identify as white, Andrea González-Ramírez of Medium notes. Others do not but are conservative — on abortion, taxes, Cuba or other issues. In some states, Hispanic men appear to be especially open to supporting Trump, Stephanie Valencia of Equis Research, a polling firm, told my colleague Ian Prasad Philbrick.

A recent Times poll of four battleground states captured some of these dynamics. Most Hispanic voters said Biden had not done enough to condemn rioting, said he supported cutting police funding (which is not true) and said they themselves opposed police funding cuts. For that matter, most Black voters also opposed such funding cuts.

Credit...Based on a New York Times/Siena College poll of likely voters from Sept. 8 to Sept. 11

It’s a reminder that well-educated progressive activists and writers — of all races — are well to the left of most Black, Hispanic and Asian voters on major issues. These groups, in fact, are among the more moderate parts of the Democratic coalition in important respects. If Democrats don’t grapple with this reality, they risk losing some of those voters.

Gov. Phil Murphy, center, had been unable to win support for a tax on the wealthy until now.Credit...Noah K. Murray/Associated Press

New Jersey is poised to become one of the first states to adopt a so-called millionaires tax, raising taxes on income over $1 million by nearly two percentage points. Phil Murphy, the state’s Democratic governor, and legislative leaders reached a deal on the tax as a way to alleviate a budget shortfall caused by the pandemic.

“We do not hold any grudge at all against those who have been successful in life,” Murphy, a former executive at Goldman Sachs, said. “But in this unprecedented time, when so many middle-class families and others have sacrificed so much, now is the time to ensure that the wealthiest among us are also called to sacrifice.”

Taxes on high incomes are likely to be central to the Democratic Party’s agenda if Biden wins the presidency. He has proposed raising tax rates on people who earn more than $400,000.

In other political news:

The Centers for Disease Control and Prevention outraged many public health experts last month by discouraging people without coronavirus symptoms from being tested. It’s now clear that Trump administration officials — and not C.D.C. scientists — wrote the recommendation, as a story by The Times’s Apoorva Mandavilli documents.

In other virus developments:

IDEA OF THE DAY: The real law-and-order problem

The writer Anand Giridharadas has written a fascinating response to my recent item on Biden’s vulnerability on so-called law and order issues. Giridharadas writes:

America does have a law-and-order problem, but it’s nothing new. And the nature of that law-and-order problem is being the most violent country in the rich world. And the genesis of that violence isn’t Black and brown communities rising up against friendly, overwhelmingly white suburbs of Minneapolis. It’s white America, from the founding days of the republic, committing to an economic and political model that made violence a daily, systemic necessity.

I’d add one point: It’s possible to agree with all of that and still think Biden is vulnerable. “Law and order” is indeed often a dog whistle for racism, but it can still be politically effective. And “law and order” issues aren’t only and always about racism. Just consider the views of Black and Hispanic voters about police funding (which are highlighted in the chart earlier in today’s newsletter).

Along with his response, Giridharadas includes an interview with Senator Chris Murphy of Connecticut. He’s the author of a new book, “The Violence Inside Us: A Brief History of an Ongoing American Tragedy,” which delves into the racist roots of America’s propensity toward violence.

Our weekly suggestion from Gilbert Cruz, The Times’s Culture editor:

Less than two months before a presidential election, it might seem odd to recommend a series about politics, given that it’s everywhere. But I am locked into watching “Borgen,” now available on Netflix.

The three-season drama follows Birgitte Nyborg, a moderate Danish politician who becomes that nation’s first female prime minister. The tone falls somewhere between the often-too-idealistic “The West Wing” and the always-too-self-serious “House of Cards.” It’s a peek into a system in which compromise and deal-making between multiple political parties are often as necessary as pure power plays.

And, as our TV critic Margaret Lyons wrote recently in her Watching newsletter (subscribe!), “Alongside the political material, ‘Borgen’ is a grounded, rich domestic drama, and Birgitte’s seemingly #relationshipgoals marriage becomes something much messier and more fraught.”

The nature of fame on TikTok is inherently different from other platforms like Instagram: It has an algorithm that propels kids to stardom overnight, and entire fandoms are often built around creators of relatively mundane videos.

In The Atlantic, the writer Kaitlyn Tiffany explains how fame on TikTok serves as a reflection of what modern girlhood looks like. Videos often spotlight activities girls have been doing for decades, from dancing in their bedrooms to fighting with parents.

Arsenal have not conceded at home for the first time since July 1. Goalkeeper Runarsson made his debut for the Londoners
Sandro Tonali: Milan on the crest of a wave. The Rossoneri shirt is pressing, but I'm getting in shape
Kadyrov's adviser hit the judge in the groin, and his son was dismissed from Akhmat and banned for three years. At first they all denied
AEK Carrera lost both matches in the Europa League with a total score of 1:5
Stefano Pioli: Milan have not achieved anything yet. The season is long, we will face difficulties
Mourinho 0:1 with Antwerp: the Best team won and the worst team lost
Bale did not make a performance in his first three games for Tottenham. He hasn't scored since January
Source https://www.nytimes.com/2020/09/18/briefing/joe-biden-cdc-amy-dorris-your-friday-briefing.html

2020 Election Live Updates: "If Florida goes blue, it's over," Biden says as he and Trump campaign in Florida

Lawrence out, No. 1 Clemson looks for 10th straight over BC

Debris falls from supertall NYC skyscraper; no one injured

No. 1 Clemson dealing with rash of injuries on defense vs BC

Jason Blum Gets $11.4 Million for Historic Mansion in Off-Market Deal

French terror attacks are a stark warning to US voters

Which states have the most electoral votes?

‘We’ve got to stop the bleeding': Democrats sound alarm in Miami

How Tristan Thompson Supported Khloe Kardashian During Her Coronavirus Battle

Black leopard mauls man who paid to have pictures taken

'The Mandalorian' is back. This guide to 'Star Wars' lore will help you follow it

On COVID-19, Andrew Cuomo damned himself with his own words

Cam Newton on Patriots' struggles: 'Losing is not acceptable in this locker room'

O'Brien: Trump put an end to Obama-Biden 'leading from behind foreign policy' toward China

Superstore's Nico Santos On Keeping the Humor Amid the Pandemic Reality

Jeff Bridges shares update after Lymphoma diagnosis: 'This cancer is making me appreciate my mortality'

Parents, advocates in 2 Md. counties weigh in on back-to-classroom plans

Pompeo wraps up anti-China tour of Asia in Vietnam

2020 Daily Trail Markers: How ads from the two campaigns differ in the final sprint

Trump and Biden Converge in Florida, an Elusive Prize Still Up for Grabs

Yanks plan to exercise Britton option, not Gardner or Happ

Canceled Rose Parade Being Revived As A Variety Special

Karlie Kloss Is Pregnant! Look Back at Her and Joshua Kushner's Love Story

Americans, your vote matters for the planet's survival

Facebook doesn't censor conservatives. It plasters their views all over your feed.

Daily coronavirus cases reached a new high on Thursday with more than 83,700 cases

What's on TV Friday: 'My Big Italian Adventure' on HGTV