The Met Reviews Items It Received From a Dealer, Now a Looting Suspect

Officials of the Indian government and the Metropolitan Museum of Art are discussing whether a number of prized antiquities that the museum began acquiring three decades ago were the product of looting by Subhash Kapoor, a Manhattan art dealer accused of being one of the world’s most prolific smugglers of stolen artifacts.

Since 1990, the Met has acquired some 15 antiquities that passed through Mr. Kapoor’s hands during a period in which, the authorities say, his smuggling ring was active and he routinely sold or donated rare and costly artifacts to at least a dozen American museums.

The discussions are part of a major push by India to recover some of the tens of thousands of sacred idols and ancient relics now known to have been plundered in the last half-century by a variety of smugglers and temple raiders.

Last month, New York officials charged Mr. Kapoor with 86 felony counts and accused him of trafficking in $145 million in antiquities dating back as far as 1974.

The first Kapoor antiquities to arrive at the Met were a set of first-century terra-cotta rattles in the shape of Yaksha, a nature spirit. The last Kapoor-related piece to enter the collection, an 11th-century celestial dancer carved from sandstone, came in 2015.

Each of the 15 objects was either gifted or sold to the Met by Mr. Kapoor or obtained from collectors who had acquired them from the art dealer or his New York gallery. Most of them arrived at a time when the gallery, Art of the Past on Madison Avenue, was a respected anchor in its field and before Mr. Kapoor’s 2011 arrest in Germany and 2012 transfer to India, where he is still awaiting trial on smuggling charges. 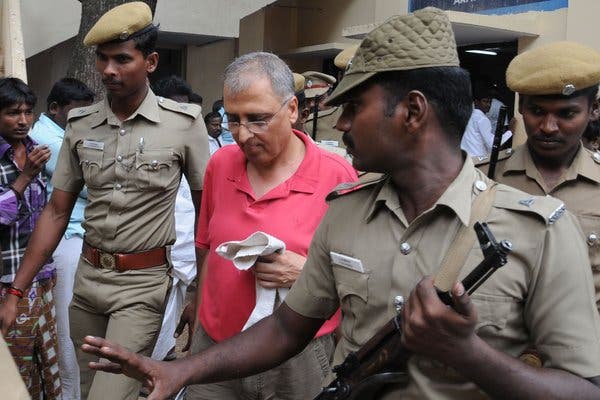 None of the provenances for the Met’s items, as shown on the museum’s website, lists an owner who predates Mr. Kapoor.

Several years ago, when the authorities first characterized the scope of the smuggling they attributed to Mr. Kapoor , the Met said it did not plan a special review of its collection because it said it did not think the items it held were the focus of suspicion. More recently, museum officials reversed that position and began a more thorough review of the antiquities that track back to Mr. Kapoor.

“As we have since learned of the multiple law enforcement actions, and in the spirit of our enhanced procedures over recent years, we are now seeking to identify additional provenance information,” the museum said in a statement.

The Met declined to discuss the status of the talks with India or to characterize whether the museum now believes that some of the items were looted.

“It is a good initiative,” D.M. Dimri, a spokesman for the Archaeological Survey of India, said of the Met’s effort. His agency is responsible for safeguarding India’s most illustrious objects and monuments. “We hope other museums will follow suit too and verify the source of their acquisitions in case they have our stolen antiquities.”

The Asia Society in Manhattan is studying the provenance of at least one item — a 12th-century copper-alloy statue of the deity Shiva dancing in the center of a spoked circle — that Indian officials believe was looted. It does not have a lineage that tracks to Mr. Kapoor.

“In the past, the institution has supported the return of objects that were found to have been acquired illegally,” Tom Nagorski, the society’s vice president, said. “In this particular case, we are taking active steps to investigate and determine the validity of the claim.”

The Los Angeles County Museum of Art has recently deaccessioned an Indian artifact with a sketchy provenance, an eighth-century gilt- copper statuette of Buddha on a throne, and “begun discussions with the authorities related to its disposition,” said a spokeswoman, Erin Yokomizo.

Though neither item is connected to Mr. Kapoor, Indian officials say they help illuminate the extent of the plunder their nation has experienced since independence from Britain in 1947. The United Nations organization UNESCO has calculated that more than 50,000 idols, icons, artifacts and antiquities have been stolen from India, but officials agree there is no exact count and may never be.

Indian officials said their conversations with the Met about the Kapoor relics began last year. The Met’s curator for South East Asian art, John Guy, had visited the country last August, returning two antiquities that the Met had on its own determined were likely looted from the country.

From left, Daniel Weiss, president of the Met, India’s New York consul general, Sandeep Chakravorty, and John Guy, the Met’s curator for South East Asian art, looking over an eighth-century sculpture of the Goddess Durga that the museum returned to India. CreditCourtesy of the Indian government

Neither of those items, an eighth-century sculpture of the Goddess Durga slaying a buffalo-headed demon, and a third-century limestone bust of a man’s head, appeared to have any connection with Mr. Kapoor. The Met said its readiness to return the two pieces demonstrated an increased level of diligence in examining the source of antiquities.

Mr. Guy returned to India last November , looking to borrow objects to be shown as part of the museum’s 150th anniversary exhibitions next year.

The Met has for decades had a policy requiring that artifacts entering the collection be accompanied by export and import licenses indicating they were legally removed from their countries of origin. In the case of Mr. Kapoor, the authorities have said he sometimes provided counterfeit licenses in an effort to dupe museum curators and other buyers.

The Met declined to say whether it had received any licenses when the Kapoor items were acquired. In its statement, it said “as each gift entered the collection it underwent the review protocol of that time — which is to acknowledge that we and the entire field have heightened procedures in recent years.”

Since that time the Met and other American museums have adopted far more painstaking requirements. In part, those strictures read: “The Museum will thoroughly research the ownership history of any archaeological materials or ancient art prior to its acquisition, including making a rigorous effort to obtain accurate written documentation with respect to its history, including import and export documents.”

In the years since Mr. Kapoor was arrested, at least 10 American museums, including the Toledo Museum of Art, the Honolulu Museum of Art, and the Samuel P. Harn Museum of Art at the University of Florida, have deaccessioned dozens of items with provenances that stretched back to him .

Key to any repatriation claim by India is establishing evidence of where an artifact might have been taken and when. In 1972, India ratified an international treaty barring the export or transfer of cultural property that lacked explicit government approval and formal documentation.

Homeland Security investigators and officials with the Manhattan district attorney’s office have spearheaded the domestic investigation into Mr. Kapoor, seizing more than 2,500 items from warehouses he controlled. Indian officials have begun to sort through these stockpiles to determine which items they can definitively claim and to weed out fakes. As a result, the vast majority of the relinquished items have yet to return to India, and the repatriations have been piecemeal.

Virginia Tech looks to knock off No. 11 Louisville

'The black man's country club': To understand black voters, look to their barbershops

Coronavirus closures in Europe raise questions in US

A Month in Locked-Down Wuhan: A Father's Death, a Sleepless Volunteer and Pressure

Masks can't stop the coronavirus in the US, but hysteria has led to bulk-buying, price-gouging and serious fear for the future

South Carolina Democratic primary: How does it work?

MAP: Which Countries Have CDC Travel Advisories Because Of Coronavirus

5 leap-year traditions from around the world