The Los Angeles Lakers are going to the NBA finals

The Los Angeles Lakers, with the help of LeBron James, defeated the Denver Nuggets, advancing to the NBA Finals.

In Game 5 against the Nuggets, the Lakers quickly regained control of the situation after both teams were tied.

James scored the most points, had the most rebounds, and assisted the team the most than any other player.

James’ 38-point triple-double, especially when he took over the fourth quarter, destroyed all hopes for Denver. Some are calling his performance one of the most impressive late-game executions in sport’s history.

It has been 10 years since the Lakers advanced to the NBA Finals. 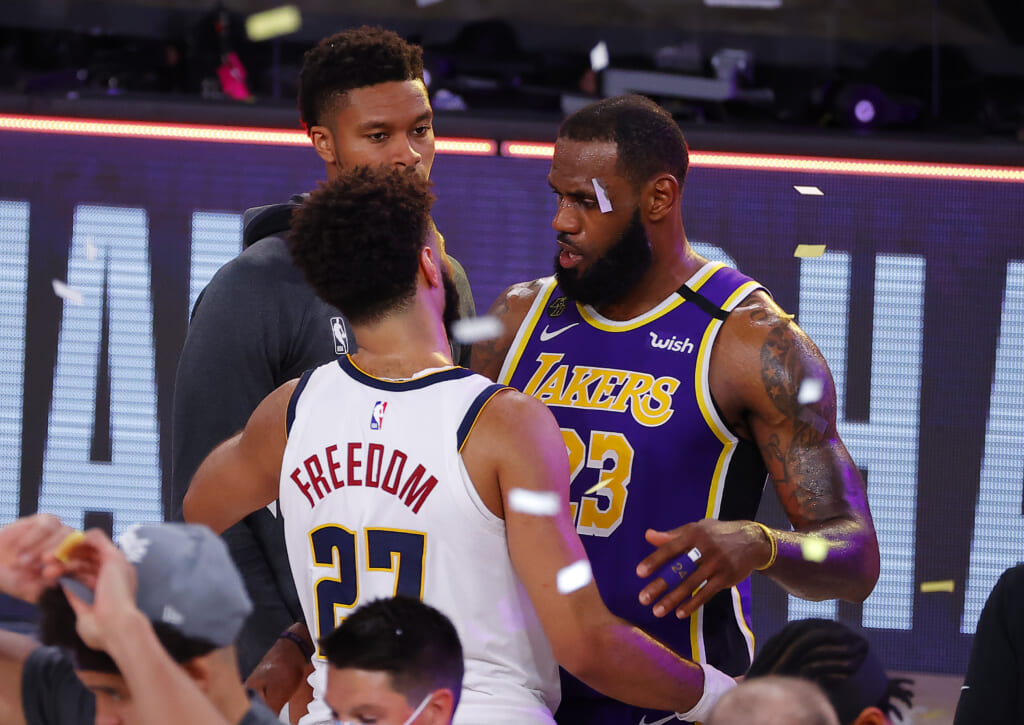 LeBron James #23 of the Los Angeles Lakers hugs Jamal Murray #27 of the Denver Nuggets after their win in Game Five of the Western Conference Finals during the 2020 NBA Playoffs at AdventHealth Arena at the ESPN Wide World Of Sports Complex on September 26, 2020 in Lake Buena Vista, Florida. (Photo by Kevin C. Cox/Getty Images)

“This is what I came here for,” James said.

“I heard all the conversations and everything that was said about why did I decide to come to L.A — the reason I came to L.A., it was not about basketball. All those conversations, just naysayers and things of that nature. I understood that, with the season I had last year and my injury, it just gave them more sticks and more wood to throw in the fire to continue to say the things that they would say about me.”

The 35-year-old forward is 16-1 in closeout games and has never lost a series while up 3-1, the Washington Post reported.

With the Lakers winning the western conference, the team is poised to play against the Miami Heat or Boston Celtics who have yet to finish their eastern conference.

Hans-Dieter flick: I Hope Alaba will sign a contract with Bayern. Our club is one of the best in the world
Diego Maradona: Messi gave Barca everything, brought them to the top. He was not treated the way he deserved
Federico Chiesa: I hope to leave my mark in Juve. We will achieve great results
The Coach Of Benfica: I don't want us to look like the current Barcelona, it has nothing
Guardiola on returning to Barca: I'm happy at Manchester City. I hope to stay here
Fabinho will not play with West ham due to injury
Ronald Koeman: Maradona was the best in his time. Now the best Messi
Source https://thegrio.com/2020/09/27/lakers-nba-finals-lebron-james/

With 72 Hours to Go, a Last Sprint to Drive Voter Turnout

This entrepreneur says he's making diamonds 'from the sky'

Trump’s winning hand: How the president can pull off another upset

Did President Trump Keep His First-Term Promises? Let’s Look at 5 of Them

How a Michelin-starred restaurant became a pandemic takeout joint

Ziyech, Werner score as Chelsea eases to 3-0 win at Burnley

225K couples with pandemic-postponed weddings owe $3.7B in loans

Orthodox priest shot at church in France, attacker at large

Priest shot at church in France

Jets have nothing to lose against Chiefs — so play like it

Noose displayed at Missouri poll covered up amid complaints

Newt Gingrich: A 2020 Election Fable -- The Bunny Rabbit, the Bear, and the Bees

On the Intimate Positions, Ariana Grande Is Fully in Her Feelings

Beyond James Bond, Sean Connery was the ultimate movie star

Muslims In Several Countries Protest Cartoons After Violence In France

Cornyn’s fake Oxford degree helped him win in 1990. In 2020, let's make sure that lie helps him lose