Former India captain and coach Anil Kumble has said his only Test hundred was special in ways more than one. Kumble, India's all-time highest wicket taker in Tests, got a hundred in a Test match against England at the Oval in 2007.

Anil Kumble on his Test century in England

"The hundred certainly was very special. Because I tried it...tried, tried, tried from the first game, and I got it right in the 117th. So it was probably guesswork for me as well. Guessing what the bowler would do, and then I got all the guesswork right in the 117th Test match," Kumble told India off-spinner R. Ashwin on his Youtube chat show 'DRS with Ash'.

"More than me, if you look at the balcony, my teammates were extremely happy. I think Laxman just fell off celebrating my hundred," the legendary off-spinner recalled. 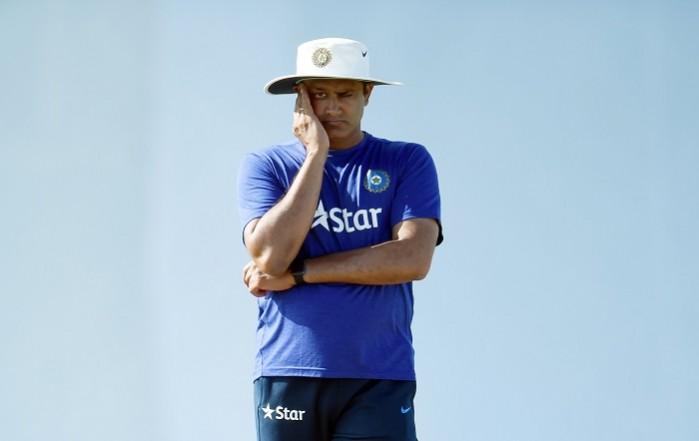 After Anil Kumble stepped down, the BCCI has a difficult decision to makeJewel Samad/AFP/Getty Images

"So I was trying to make sure that I go after KP and probably I stepped out too early. And KP just threw it really wide. And I had a swing. I knew I had taken the inside edge and before even Steve Bucknor thought that that was byes, I put my hand up, saying I have scored my hundred," Kumble added.

Mikel Arteta: Liverpool is the standard that Arsenal must achieve. They are superior to us in many aspects
Leicester lead the Premier League after three rounds. Liverpool and Everton also scored 9 points
Jurgen Klopp: Roy Keane said Liverpool showed sloppy football? I want to hear it. Incredible game description
Manchester City refused to buy Coulibaly after the transfer of Dias
Conte wants to sign Inter Gervinho from Parma
Robertson and Trent contributed 33 goals in the Premier League in 3 years - the best result among defenders
In Genoa, 14 cases of coronavirus after the match with Napoli. Neapolitans play Juve on October 4
Source https://www.ibtimes.co.in/hundred-certainly-was-very-special-says-kumble-825776

Oh, That’s Why He Didn’t Want Anyone to See His Taxes

Alia Bhatt's birthday wish for Ranbir Kapoor has a typo; netizens have a field day

Doc Rivers out as Clippers coach after NBA playoff disaster

Wife of Brad Parscale said he made suicidal comments 'throughout the week' before hospitalization, police report says

Steven Stamkos out as Lightning aim to win Stanley Cup in Game 6 vs. Stars

Seahawks' DK Metcalf fumbles away easy touchdown vs. Cowboys, redeems himself later on

A Look At Amy Coney Barrett's Record On Abortion Rights

What Parents Need to Know About School Coronavirus Case Data

Indians scouting report: What should worry the Yankees

How to use old blooms to make homemade potpourri

Where do Atlanta Falcons go after another epic meltdown?

Q&A: Will the Trump administration be able to ban TikTok?

Kennedy construction work leaves vehicles with flat tires: ‘Like the car went down a ditch’

Tanqueray, Humans of New York Star, Brings in Over $1.5 Million in Donations

Rangers’ Marc Staal aftermath and vicious moment that changed everything