The two biggest moments of the first 2020 Biden-Trump presidential debate, when put together, reveal just how much danger American democracy is in.

The first moment came when moderator Chris Wallace asked President Trump to condemn white supremacists and tell them to refrain from violence. When Trump demanded a specific group to criticize, Vice President Joe Biden supplied one: the Proud Boys. Trump did the opposite.

“Proud Boys, stand back and stand by,” the president said, immediately adding: “I’ll tell you what, somebody’s got to do something about antifa and the left.” “Standing down and standing by sir,” the group’s official account wrote on Telegram, a messaging app commonly used by extremists.

The second moment came at the very end, during a discussion of Trump’s (false) claims about widespread voter fraud in the 2020 election. Wallace asked Trump if he would “urge his supporters to stay calm” and “pledge tonight that you will not declare victory until the election has been independently certified.” Trump responded by once again doing the opposite, calling on his fans to engage in behavior that sounds a lot like voter intimidation:

I’m urging my supporters to go in to the polls and watch very carefully, because that’s what has to happen. I am urging them to do it. As you know today, there was a big problem. In Philadelphia, they went in to watch. They’re called poll watchers. They were thrown out. They weren’t allowed to watch. You know why? Because bad things happen in Philadelphia. Bad things.

These were both moments when Trump was asked to explicitly affirm baseline principles of American democracy, the kind of thing so basic you can’t imagine them being asked in a previous presidential debate.

Instead, he told a violent far-right group to “stand by.” He called on his supporters to head to the polls and “watch” what’s happening — specifically in Philadelphia, a majority-minority city. Putting two and two together here leads to a very scary four: The president seems to be actively stoking violent conflict surrounding American elections.

“What would you say if you saw it in another country? A democratic emergency,” writes Brendan Nyhan, a political scientist at Dartmouth College.

Trump has smashed the rules of democracy

There have been ominous signs on the peaceful election front already. Trump supporters have already disrupted early voting in Virginia; Donald Trump Jr. called on supporters to join a Trump “army” that would provide “election security.”

We can’t yet know for sure whether Trump’s debate night rhetoric will escalate this, directly causing acts of violence related to the election. Maybe it will, maybe it won’t.

But the fact that I even have to say “maybe” should underscore how profoundly fucked up this all is.

The president of the United States should not have a hard time condemning far-right militants and calling for a peaceful election. Trump’s behavior is the sort of thing you expect in very weak and young democracies, especially ones that had recently experienced civil war. These are places where key political actors don’t accept the rules of the democratic game and are willing to take up arms if they’re defeated. These are the kinds of places where leaders call on friendly militias to “stand by.”

But Trump clearly doesn’t care about democracy. The litany of anti-democratic behaviors — suborning neutral institutions like the Justice Department, turning foreign policy into an extension of his reelection campaign, openly stating his admiration for foreign dictators’ authoritarian behaviors — should at this point be familiar to every politically engaged American. 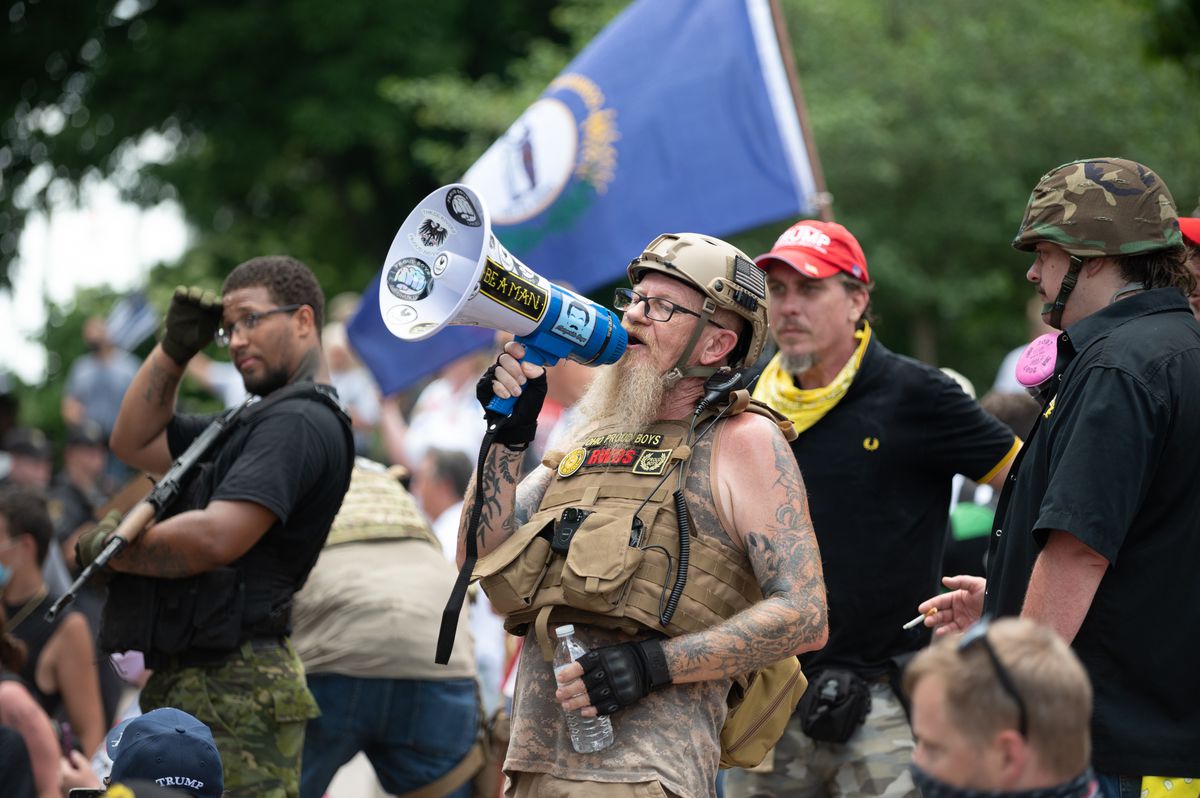 He has repeatedly and falsely claimed that the election will be rigged against him, including during the debate, and refused to promise a “peaceful transition” if he loses.

To put it crudely, Trump has adopted the political attitude of a would-be dictator or post-conflict warlord: My opponents cannot win, and if they do, I simply will not accept it. He has been able to get away with this because the Republican Party has refused to abandon him, and nobody expects the first debate to be a breaking point on that front.

The effects of all this on a democratic system are corrosive. At its most fundamental level, democracy depends on all major political players agreeing to accept what happens in elections. If one faction doesn’t, and simply refuses to abide by the rules, there’s nothing to force them to comply other than, well, force.

Terrifyingly, Trump has introduced that prospect into modern American politics. His approach to politics is one that, in other countries, causes the breakdown of democratic political systems and constitutional crises. Rhetoric that tries to stoke election-related violence is another significant step in that direction.

Will you help keep Vox free for all?

The United States is in the middle of one of the most consequential presidential elections of our lifetimes. It’s essential that all Americans are able to access clear, concise information on what the outcome of the election could mean for their lives, and the lives of their families and communities. That is our mission at Vox. But our distinctive brand of explanatory journalism takes resources. Even when the economy and the news advertising market recovers, your support will be a critical part of sustaining our resource-intensive work. If you have already contributed, thank you. If you haven’t, please consider helping everyone understand this presidential election: Contribute today from as little as $3.

Hans-Dieter flick: I Hope Alaba will sign a contract with Bayern. Our club is one of the best in the world
Diego Maradona: Messi gave Barca everything, brought them to the top. He was not treated the way he deserved
Federico Chiesa: I hope to leave my mark in Juve. We will achieve great results
The Coach Of Benfica: I don't want us to look like the current Barcelona, it has nothing
Guardiola on returning to Barca: I'm happy at Manchester City. I hope to stay here
Fabinho will not play with West ham due to injury
Ronald Koeman: Maradona was the best in his time. Now the best Messi
Source https://www.vox.com/policy-and-politics/2020/9/30/21494860/2020-presidential-debate-trump-biden-democracy-emergency

AP: Use of slurs not ‘isolated’ at Louisiana State Police