As COVID-19 infections spiked in South Texas, officials closed beaches and the governor ordered the wearing of masks, but crowds still descended on Galveston’s restaurants and Pleasure Pier amusement park on Friday.

At The Spot, a popular three-story beachfront restaurant on Seawall Boulevard, signs warned that patrons had to wear masks or the business could be fined $1,000. Staff patrolled the parking lot, making sure several dozen customers waiting in line were social distancing. Nearby, police warned passersby they faced $250 fines for not masking up. Some listened, some didn’t.

This was Texas — and much of America — in the strange, scary, defiant age of the virus. Skies were sunny and people needing escape pushed the limits on a breezy holiday weekend. Mask-less children darted toward a roller coaster while health officials cautioned that infections could spiral further upward — those were the conflicting images of a nation. Jimmy, center, and Rachel Kinder, right, brought their daughter Arabella, 5, to the Pleasure Pier on Galveston Island. “The whole mask thing should be a personal choice,” Jimmy Kinder says.

“I don’t really see too much sense in it,” said Randy Clark, 49, who was visiting from North Texas with a dozen relatives. “There’s no continuity to the rules. They closed the beaches and canceled the light show, but you can still go in a restaurant or the Pleasure Pier.”

Galveston County leaders relented a bit on Friday by allowing foot traffic on Bolivar Peninsula. In the Galveston area, about 14% of those tested had the virus this week, up from 0.6% in May, when Abbott allowed businesses to start reopening, according to Dr. Philip Keiser, Galveston County’s health director.

“Right after the reopening, people came down to Galveston and were not paying much attention to the rules” about social distancing and wearing masks at bars and restaurants, he said. “People were just gathered around, acting like it was a big party.” 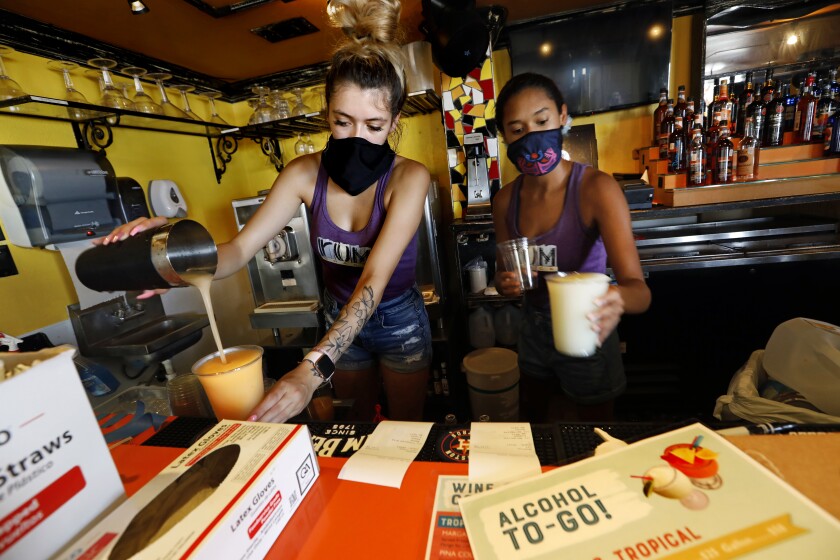 Nila White, 20, left, and Brooklin Lafong, 22, stay busy making cocktails to go at The Spot, a popular restaurant and bar in Galveston, Texas.

The average age of those testing positive dropped from 60 in April to 29 last week, Keiser said. One of the biggest hot spots in the county is an inland area on Galveston Island where service workers live.

“The business owners are in a terrible situation: They need to stay open to make money, but they don’t want their employees to get infected. The problem is, there are chokepoints: Is there a line going in? Is there a way to keep people from gathering as they move through the establishment?”

Keiser planned to mostly stay home on the Fourth of July, except for a drive down Seawall, “just to see what it looks like.”

At the Pleasure Pier, tables were full at Bubba Gump Shrimp Co. restaurant and families were flowing onto the rides and into the souvenir shop. They passed a Duck Tour boat about to depart with a dozen people aboard, all masked, with seats in between.

“Businesses need to stay open or they’re just going to shut down,” said the tour boat’s captain, Raymond Smith, a father of eight who wore a shark mask. “What do you do, cower in your house and don’t feed your children?” Visiting from San Diego with their mother Shadley Pastor, Gemma Pastor, 7, left, and Sykora Pastor, 9, look at their live pet crabs they bought at Galveston Beach, along with their cousin Macie Hartz, 9, of Texas.

Jimmy and Rachel Kinder bought T-shirts and mermaid toys for their 5-year-old daughter Arabella at the Pleasure Pier before leaving to grab lunch at the Rainforest Cafe just before the mask order took effect. Rachel Kinder, 27, a stay-at-home mom, had a mask around her neck. Her husband did not.

“The whole mask thing should be a personal choice,” said Jimmy Kinder, 29, a welder from Tulsa, Okla., who’d recently been working in East Texas. “It doesn’t make sense to close the beach and have the pier open — you can distance a lot better there.”

Kinder agreed with President Trump that people should have the right to choose not to wear masks, but he said he disagreed with the way the president had downplayed the severity of the pandemic.

“I probably should be more worried,” he said. Raymond Smith, owner of Duck Tours on Galveston Beach, wears a shark scarf around his face, as he waits for customers.

Shadley Pastor, 40, a Houston native, was visiting with her two young daughters from San Diego. She noticed a sharp contrast between residents’ response to the pandemic.

“It’s more strict in San Diego, more masking — even my kids noticed it,” said Pastor, a stay-at-home mom, as she walked Seawall with 9-year-old Sykora and 7-year-old Gemma.

Over at The Spot, Graham Gemoets, 50, of Houston was finishing lunch with his husband and said he wished officials had announced pandemic restrictions sooner.

The couple usually rent out their second home on the island through Airbnb, but have seen a slew of cancellations. Gemoets’ catering business has also been decimated by the pandemic. On Friday, they were dismayed to hear fellow diners curse out someone busing tables for taking too long to clean (they left her a tip). With bikinis and T-shirts hanging in the window, Elad Amsalem looks through the front of his store, Beach Break Surf Shop, while waiting for customers on Friday.

“People don’t realize all the background work, having to wipe down tables and testing,” Gemoets said.

The Spot’s owner, Dennis Byrd, said he’s instituting new protections every day for patrons and staff, including two weeks’ paid leave for any employee with symptoms.

“I feel like I’ve converted my restaurant into an airport,” said Byrd, 40.

Despite the new pandemic orders, Byrd said business was steady. He also owns two hotels, which were 75% occupied for the holiday weekend, typical of the island now. He said the mask and beach closure orders were helpful, but he wasn’t sure how officials would prevent crowds from forming over the weekend, especially along Seawall.

“They say there’s going to be no loitering, but how are you going to enforce that?” Byrd said. “We’re going to find out.”

Chernyshenko about Euro 2020 in St. Petersburg: Despite the postponement, the organizers will keep the fanzones and trophy tour of the European Cup
Jesus used to eat too much fast food and want to shoot himself because of bad matches. Then I hired a personal trainer
David Silva's Father: The son loves Serie A and says he can play there until he is 40
Alexis Sanchez: I really wanted to stay at Inter. I found a family here
Emil Heskey: Salah should have moved to another club if Liverpool had not taken the Premier League
Roma are discussing with Manchester United the purchase of Smalling
Belenov – the best player of Ufa in the 2019/20 season
Source https://www.latimes.com/world-nation/story/2020-07-03/texas-waited-to-require-masks-close-beaches-ahead-of-fourth-of-july-as-coronavirus-spiked