BMW built a pickup that’s as American as South Carolina barbeque. If they made that with schnitzel. 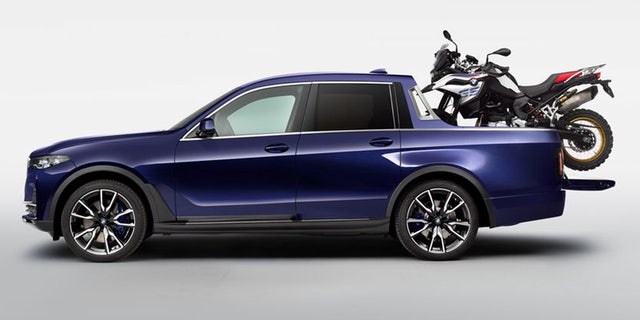 It’s not for sale, but a one-off concept fabricated by a group of vocational trainees at the company for use at a motorcycle show.

The vehicle is based on the Spartanburg-built X7 SUV and features a 4.5-foot bed with wood flooring that can accommodate a bike when the tailgate is down. 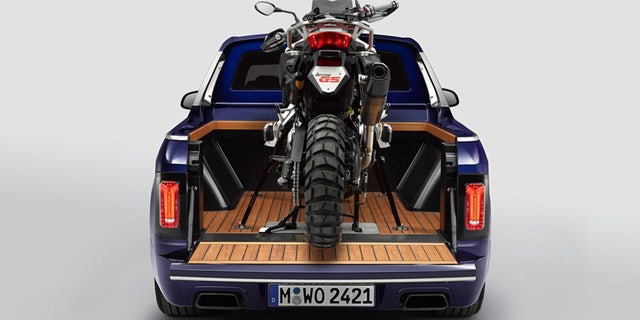 It’s a lot like a luxurious version of the Honda Ridgeline, but BMW has no plans to put it into production.

That’s too bad, because the X7 would make a decent lifestyle pickup. Especially the high-performance M50i with its 523 hp/553 lb-ft turbocharged 4.4-liter V8, which starts with a bark that may be a bit too loud before settling into a nice rumble. 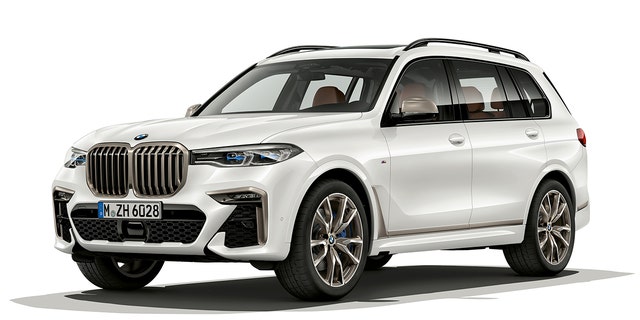 You might not want to get it dirty, but the $100,795 SUV has a payload rating of 1,650 pounds and can tow 5,950 pounds, which puts it on par with some midsize trucks. Both figures would surely be even higher if you jettisoned its third row of seats. 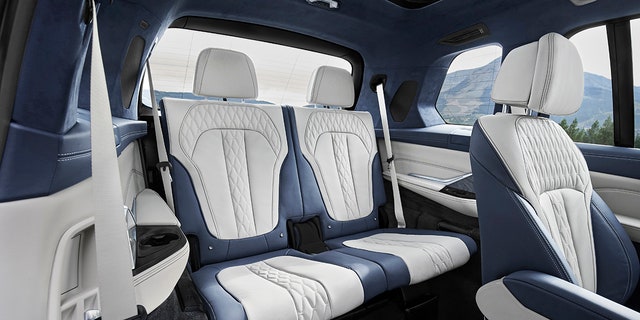 They’re snug, but can accommodate adults for short trips and are great for kids, while the front two rows are spacious as a king cab pickup, or BMW 7-Series sedan. You can fold the powered third-row seatbacks down with the press of a button inside the tailgate to open up 48.6 cubic feet of cargo space, or press another that adjusts the second row to maximize legroom all around. 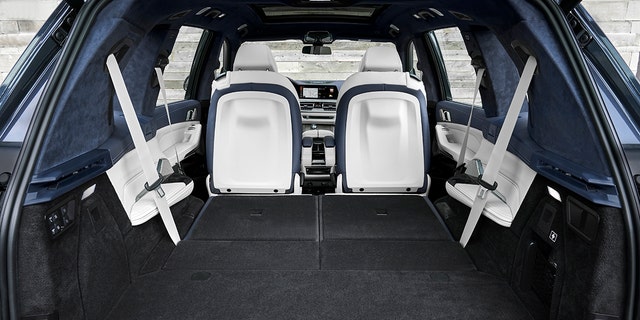 The X7, which is also available in a $75,895 xDrive40i model with the more than adequate 335 hp 3.0-liter inline-six featured in the pickup, is built on a platform shared with the flagship 7-Series (and pretty much every BMW these days,) and with its standard air suspension system rivals the sedan for comfort. 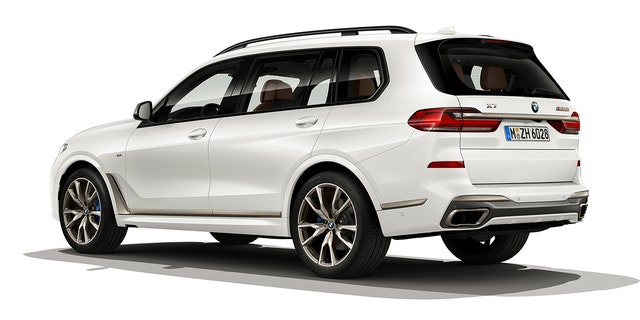 I’ve never driven a vehicle with 22-inch wheels and low profile tires that’s anywhere near as smooth as the X7 on pockmarked roads. Switching the computer-controlled dampers to its M division tuned Sport mode turns it into an able and composed handler on smooth ones, despite its 5,600-pound weight. 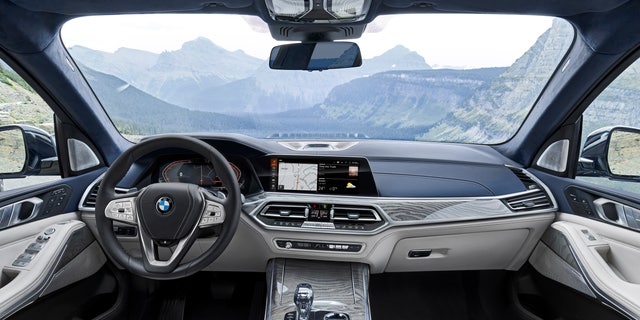 As with many current BMWs, the comprehensive climate control, 360-degree camera system and electronic driver aids can be complicated and require too many steps to operate until you become acclimated. However, the last of those can be enhanced with a $1,700 Drivers Assistance Pro Package that provides one of the best adaptive cruise control and lane-keeping systems available today, plus a traffic jam assist that practically takes over the driving at stop-and-go speeds. I used the former over hundreds of miles and barely had to steer, though the system does require you to keep a hand on the wheel to show you’re paying attention.

Your gaze may be distracted by the cabin. Every surface from top to bottom is trimmed in something or other of high quality. You’ll have more luck finding the Holy Grail in it than a cheap piece of plastic. The X7 is definitely a case of getting what you pay for.

If the idea of paying six figures for a pickup seems ridiculous, keep in mind that you can spend that much on a Ford F-Series Super Duty these days, while a maxed-out F-150 is over $80,000 and a $75G-$100G Lincoln Navigator is basically one of those in a tux.

BMW probably won’t ever turn the X7 into a pickup for real, but if you’re looking for a short bed truck with a cap and a lot of class, it’ll do.

The reforms of Manchester United and Liverpool are reminiscent of the history of the Premier League. Then the tops got tired of social justice and wanted freedom
Thomas Muller: Bayern are confident, we are in good shape
Anton Miranchuk about the match with Bayern: we Go out to win and set the highest goals
Frankie de Jong: life in Barcelona is so pleasant that it may seem as if you are on vacation for a whole year
Donnarumma, Hauge and three members of the Milan team were infected with the coronavirus
The 37-year-old Ribery is at the top of Serie A in pressing, dribbling, speed and assists. And educates young and thinking about becoming a coach
Real Madrid want to resolve the issue of Ramos' contract as soon as possible
Source https://www.foxnews.com/auto/test-drive-bmw-x7-m50i-pickup

Wendy Williams’ former DJ speaks out amid concerns about her behavior, health

What Went Wrong for the Patriots? Everything

Power shut off in California as winds, fire danger increase

‘The Undoing’ on HBO: Who Plays Elena, the Mysterious Woman in Episode 1?

Online Test Proctoring Claims to Prevent Cheating. But at What Cost?

How an Israeli thinker became one of Trumpism’s foremost theorists

Ant Group could raise nearly $35B in record share offering

`The books that see her through’: Winfrey suggests seven

Tropical Storm Zeta ‘strengthening’ as it moves toward US Golf Coast

Musicians line up against Trump over music at rallies

Japan’s new prime minister has a rags-to-riches story. But can he save Japan from crisis?

Trump mocks Biden for mixing him up with former President George W. Bush

Women on Qatar Airways Flight Say They Were Strip-Searched

The world is watching: Americans aren't the only ones who care about the Trump-Biden face off

Black Americans are fired up and flocking to the polls

Sen. Susan Collins To Vote Against Barrett Confirmation To the Supreme Court

3 reasons markets could be in for a bumpy week

Trump, Biden clash when asked about biggest foreign threat to US

Facebook wants to add cloud games to its platform, but you won't find them on Apple devices

Outspent In The Homestretch, Trump Campaign Says Its Ground Game Is Stronger

Morning Digest: Democrats can control California's second-largest county if they win this one race

If You Aren't Leveraging Email Marketing, This 7-Course Bootcamp Can Show You How

The messy politics of Nextdoor

Build an Ecommerce Store on Shopify with Help From This Bootcamp

See Jennifer Lopez's Most Iconic Looks Through the Years

How the Future of Packaging Automation Will Be Ruled by Robots

Prince Harry urges everyone to join the ‘global movement’ of protests

The adult amusement park of yesterday, the Holiday Inn Holidome