Listen to This Op-Ed

To hear more audio stories from publishers like The New York Times, download Audm for iPhone or Android.

Whatever his wobbles, Joe Biden has, from the start of his presidential campaign, got one thing exactly right: The 2020 election is a battle for the soul of America. That’s not just a pretty slogan. It’s the stomach-knotting truth — and it’s the frame he should use for choosing his running mate.

It’s why he should pick Senator Tammy Duckworth of Illinois.

She’s a paragon of the values that Donald Trump, for all his practice as a performer, can’t even pantomime. She’s best described by words that are musty relics in his venal and vainglorious circle: “sacrifice,” “honor,” “humility.” More than any of the many extraordinary women on Biden’s list of potential vice-presidential nominees, she’s the anti-Trump, the antidote to the ugliness he revels in and the cynicism he stokes.

Americans can feel good — no, wonderful — about voting for a ticket with Duckworth on it. And we’re beyond hungry for that. We’re starving.

That ache transcends all of the other variables that attend Biden’s deliberations as he appraises Elizabeth Warren, Kamala Harris, Val Demings and others: race, age, experience, exact position on the spectrum from progressive to moderate.

Duckworth, a former Army lieutenant colonel who lost both of her legs during combat duty in Iraq, is a choice that makes exquisite emotional and moral sense. Largely, but not entirely, because of that, she makes strategic sense, too.

For the uninitiated: Duckworth, 52, is in the fourth year of her first term in the Senate, before which she served two terms in the House. So unlike several of the other vice-presidential contenders, she has ascended to what is conventionally considered the right political altitude for this next step.

But it’s her life story that really makes her stand out. It’s the harrowing chapter in Iraq, yes, but also how she rebounded from it, how she talks about it. It’s her attitude. Her grace.

As my colleague Jennifer Steinhauer explained in a recent profile of Duckworth in The Times, she didn’t just serve in the Army: She became a helicopter pilot, which isn’t a job brimming with women. And as she flew near Baghdad one day in 2004, her Blackhawk was struck by a rocket-propelled grenade. The explosion left her near death.

She later received a Purple Heart, but she bristles when she’s called a hero. That designation, she has often said, belongs to her co-pilot, Dan Milberg, and others who carried her from the wreckage and got her to safety.

She put it this way when, as part of a “Note to Self” feature on “CBS This Morning,” she read aloud a letter that she had written to the younger Tammy: “You’ll make it out alive completely because of the grit, sacrifice and outright heroism of others. You haven’t done anything to be worthy of their sacrifices, but these heroes will give you a second chance at life.” She paused there briefly, fighting back tears.

To Steinhauer she said, “I wake up every day thinking, ‘I am never going to make Dan regret saving my life.’” Her subsequent advocacy for veterans, her run for Congress, her election to the Senate: She casts all of it in terms of gratitude and an obligation to give back.

Tell me how Trump campaigns against that. Tell me how he mocks her — which is the only way he knows how to engage with opponents. Or, rather, tell me how he does so without seeming even more obscene than he already does and turning off everyone beyond the cultish segment of the electorate that will never abandon him. Duckworth on the Democratic ticket is like some psy-ops masterstroke, all the more so because it was she who nicknamed Trump “Cadet Bone Spurs.”

I asked her about that on the phone on Thursday, remarking that it was uncharacteristically acerbic of her. “This guy’s a bully,” she said. “And bullies need a taste of their own medicine.”

Warren, too, is terrific at giving Trump that. Her placement on the Democratic ticket might fire up the progressives who regard Biden warily. And she could make an excellent governing partner for him.

But mightn’t she also give moderate voters pause? What about her age? She’s 71. Biden’s 77. Can the party of change and modernity, whose last two presidents were both under 50 when first elected, go with an all-septuagenarian ticket?

Governing partners don’t matter if you don’t get to govern. The certain catastrophe of four more years of Trump demands that Biden choose his running mate with November at the front, the back, the top and the bottom of his mind.

Harris also ably prosecutes the case against Trump. But many progressives have issues with her, and the idea that she’d drive high turnout among black voters isn’t supported by her failed bid for the Democratic nomination. She lacked support across the board, including among African-Americans. And in a recent national poll conducted by The Times and Siena College, more than four in five voters — including three in four black voters — said that race shouldn’t be a factor in Biden’s vice-presidential pick.

Duckworth is neither progressive idol nor progressive enemy. That partly reflects a low policy profile that’s among her flaws as a running mate but could actually work to her advantage, making her difficult to pigeonhole and open to interpretation. Trump-weary voters can read into her what they want. And in recent congressional elections, Democrats have had success among swing voters with candidates who are veterans.

Duckworth certainly can’t be dismissed as the same old same old. Her vice-presidential candidacy would be a trailblazing one, emblematic of a more diverse and inclusive America. Born in Bangkok to an American father and a Thai mother, she’d be the first Asian-American and the first woman of color on the presidential ticket of one of our two major parties. 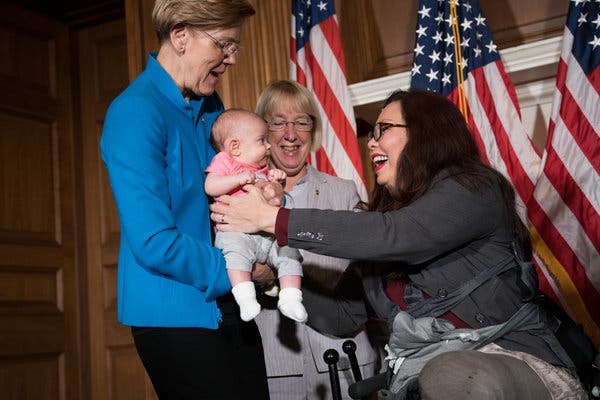 She was the first United States senator to give birth while in office and the first to bring her baby onto the Senate floor. You want relatable? Duckworth has two children under the age of 6. She’s a working mom.

She’s not the product of privilege: In fact her family hit such hard times when she was growing up in Hawaii that at one point she sold flowers by the side of the road. But she went on to get not only a college degree but also a master’s in international affairs.

Cards on the table: I’m not at all sure that running mates matter much on Election Day. There’s ample evidence that they don’t.

But in any given election, they sure as hell might. Biden would be a fool, given the stakes, not to consider his running mate a victory clincher or deal breaker and to choose her accordingly.

Duckworth’s virtues include everything that I’ve mentioned plus this: She projects a combination of confidence and modesty, of toughness and warmth, that’s rare — and that’s a tonic in these toxic times.

I asked her whether she deems Trump a patriot. She said that he wraps himself in the American flag — a flag, she noted, that will someday drape her coffin — for the wrong reasons.

“I would leap into a burning fire to pull that flag to safety, but I will fight to the death for your right to burn it,” she told me. “The most patriotic thing you can do is not necessarily putting on the uniform but speaking truth to power, exercising your First Amendment rights — that’s what created America, right?”

I asked her how it felt to have her name floated as a possible vice-presidential nominee.

“It’s surreal, right?” she said, recalling that she was once “a hungry kid who fainted in class for lack of nutrition. It’s unbelievable I’m even a U.S. senator.”

“But it’s one team, one fight,” she added, referring to the Democratic quest to defeat Trump. “I will work as hard as I can to get Joe Biden elected because the country needs it. It doesn’t matter where I end up on that team.”

Yes, Senator Duckworth, it does. In the right role, you could help guarantee the right outcome.

Listen to “The Argument” podcast every Thursday morning, with Ross Douthat, Michelle Goldberg and me.

Atalanta does not lose 15 matches in a row – 13 wins and 2 draws
Lorient threw one newcomer off a plane and sent another under the water-all for the sake of presentations on social networks
Pasalic scored a hat-trick in the match against Brescia. Atalanta smashes the opponent 6:1
Rummenigge on Ribery: Hennessy was like a second father to him, and I was like a second mother
Giroud has scored 6 goals in his last 10 Premier League games – the same number as in 51 games before
Liverpool leads its graduates through life. You'll Never Walk Alone in action
Ararat-Armenia won the Armenian championship for the second season in a row
Source https://www.nytimes.com/2020/06/27/opinion/sunday/tammy-duckworth-biden-2020.html

Oklahoma man charged with murder for killing 3 in car crash

One day into new mask law, one man is dead and another injured over a dispute in a Michigan store

Tourists cause problems at Spanish beaches by claiming spots and then leaving for hours: report

6 Ways to Improve Your Small Business SEO in 2020

Inside Glee's Shocking Tragedies and the Cast's Unbreakable Bond

'Significant progress' made against fire on Navy ship in San Diego