Bhumika Chawla has penned yet another emotional letter remembering Sushant Singh Rajput who died on 14 June. This is her second letter where she discusses about success and failures being part and parcel of one's life. 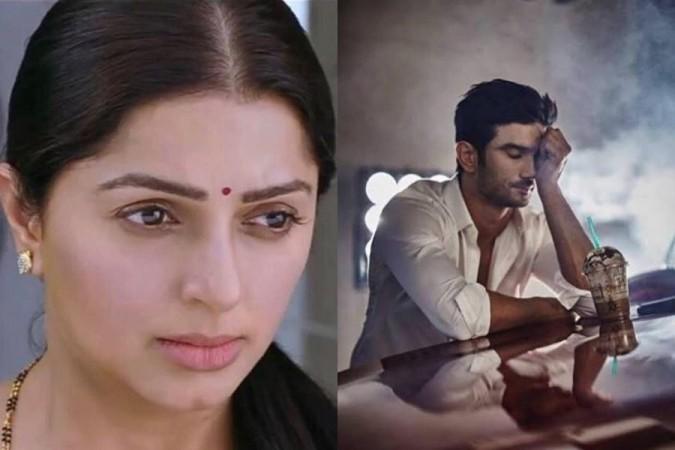 Bhumika's Waking up Thinking about Sushant
She begins, "It's been almost 20 days ... and I wake up thinking of you . Still wondering what it was ... one only shared the screen space as a character briefly but still associated together .... Was it depression - personal — then you should have spoken .... If it was professional - you had already done such good films .. YES I AGREE it's not easy to survive here — I am not talking of insider or outsiders — IT IS WHAT IT IS — yes if I have to connect with someone even after having done 50 plus films it ain't easy — but I am still grateful I am doing work — maybe I just choose to work on this perspective — constantly pushing myself to think and believe good ..[sic]"

The actress talks about how the selfish world we are living in where people approach one they need favours and turn their backs on if sought help. "Yes there are times when you call or message people from the industry ( Bollywood or other places ) most people are really WARM and KIND but we do find those who refuse to acknowledge or just brush you aside — THE WORLD IS MADE OF ALL SORTS .... THERE are most who will respect you always but rare few when they need you they come to you - but when you drop a tinkle saying you would love to work together with them , they say we will see .... or smile it off ( though I never believed in doing that earlier , I did in the last few years make an effort — that's what life is — nothing comes without effort and hard work -) ... [sic]"

"YET I STILL THANK GOD FOR Everything ... I choose to say that it's ok - maybe one doesn't fit the bill , the role and so it's ok ..... POSITIVE .... and finally if there is any thing more to you going than professional disappointment , or depression cause of various reasons —- YEH SHAHAR HAME HAMARE SAPNE DETA HAI , Naam deta hai ... kabhi Kabhi Gumnaam bhi karta ... lakho ki aabadi mein kuch TANHA BHI KARTA HAI ..... ........ if there was anything more I hope we come to know what it was ... until then FINAL GOODBYE .... PRAYERS FOR YOU - wherever you are and prayers for your family, [sic]" her concluding lines said.

Bhumika Chawla and Sushant Singh Rajput had worked together in MS Dhoni's biopic. She was seen in the role of his sister in Neeraj Pandey-directorial.

Sushant Singh Rajput's Death
The death of Sushant Singh Rajput was the biggest shock that the fans of Indian film industry got in the month of July. The Bollywood actor, who was a star in the making, died of suicide despite being a successful actor with a good fan following.

Bayern want to sell Boateng in the summer. The club has no offers yet
Solskjaer on the Europa League: a Trophy would be a big step forward for Manchester United. We want to win something
Juve have contacted Zidane, Pochettino, Inzaghi, Spalletti and Gasperini about working at the club. The Real Madrid coach refused
Coach Of Brentford: We went from a mid-level team to the third team of the season. This is an incredible achievement
Burnley are not going to sell Tarkowski for less than 50 million pounds
Lester wants to rent Trincou at Barca with the obligation of ransom for 50 million pounds
Scott Parker: Fulham have a lot to progress. And I am happy about it
Source https://www.ibtimes.co.in/bhumika-chawla-sushant-singh-rajput-i-wake-thinking-you-823785

Newcomer leads Hoadley in Democratic primary to take on Upton

Trump may finally realize he's suppressing his own vote

Trump's interview debacle sends a warning for the fall campaign