Suriya and Karthi are two top South Indian actors who enjoy a decent fan following in all nooks of the country. The recent news about the stars is regarding their possible union in the remake of a Malayalam blockbuster.

According to reports, they are all set to share the screen space in the remake of Mollywood blockbuster Ayyappanum Koshiyum. 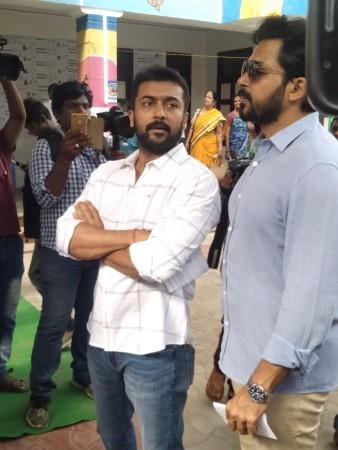 Suriya and his brother Karthi in the pooling booth to cast their votes in Chennai, Tamil Nadu.Twitter

Even though not official, credible sources to Five Star Kathiresan, who bought the remake rights of the film reveal that Suriya and Karthi will play the role of Biju Menon and Prithviraj Sukumaran in this remake movie respectively. Earlier, it has been reported that Five Star Kathiresan had roped in Sasikumar to play one of these roles. But as this is show business, anything can change anytime, and the makers are now apparently planning to rope in big names like Suriya and Karthi to do lead roles in this flick.

This recent news is receiving positive reviews from all corners, and audiences are eagerly waiting to see Suriya and Karthi for the first time on screen. If such a union happens in Kollywood, it could break all current box-office records, and in all probabilities, it will emerge as a huge hit in South India, considering the fan power of Suriya and Karthi in states like Kerala and Telangana.

Suriya fans are currently awaiting the release of his upcoming movie Soorarai Pottru, which is being directed by Sudha Kongara. This action drama film will portray the story of Air Deccan Founder GR Gopinath. Apart from Suriya, the film also stars Aparna Balamurali, Urvashi, Karunas, Jackie Shroff, and Mohan Babu.

On the other hand, Karthi's upcoming movie is Ponniyin Selvan, which is being helmed by legendary director Mani Ratnam. This film is loaded with an ensemble star cast that includes Vikram, Jayam Ravi, Jayaram, Aishwarya Rai Bachchan, Sarathkumar, Trisha, and Vikram Prabhu.

Jurgen Klopp: We are not thinking about next season, but about this one. There is much more to come
Inter is ready to buy out Sanchez from Manchester United for 20 million euros (Goal)
Werder fans are the best: they supported the team with a tractor emblem and thanked the Union with a hundred cases of beer
Flick about the Cup final with Bayer: It will not be like in the championship. They can hurt us
Holland will play in Dortmund and under 9-m number from the next season
Solskjaere and Lampard are among the contenders for the title of best coach in June in the Premier League
Umtiti injured his left knee. He won't have surgery
Source https://www.ibtimes.co.in/suriya-karthi-act-this-mollywood-blockbuster-expectations-going-sky-high-821381

After investors call for name change, Nike appears to wipe 'Redskins' off its website

Explosion at Fireworks Factory in Turkey Kills 4, Injures at Least 97

AP Exclusive: Prince Royce gets a wake-up call with COVID-19

Beaches Are Open in N.Y.C., but Virus Worries Linger

COVID-19 silenced this singing activist, but not her spirit

When Will ‘Hanna’ Season 3 Premiere on Amazon’s Prime Video

Is It Safe to Set Off Fourth of July Fireworks Around Kids? What Parents Should Know.

Sports anchor Dan O'Toole's 5-week-old daughter is 'safe' after he reported her missing: 'I am still broken'

U.K. Lifts Quarantine Rules for Visitors From ‘Lower Risk’ Countries. The U.S. Isn’t One of Them

Why College Students May Qualify for Special Covid Pandemic Aid

Stream It Or Skip It: ‘Hamilton’ on Disney+, A Beautifully-Shot Archive of The Best Musical of the Decade

Disruptive Folorunso Fatukasi looking like a rarity for Jets